Jupiter, the giant catcher’s glove, puts on a show

Tonight Jupiter will also be a "little" closer than at most oppositions, which come around about once every 13 months. That is, 75 million kilometres closer than it was last August.

Noticed a strikingly bright star in the night sky lately? Rising more or less opposite the sunset, reaching its high noon position at midnight, and setting about sunrise?

That’s Jupiter, the largest planet in the solar system, and tonight it reaches opposition or a position in which the sun, earth and Jupiter form a line.

Another of the great outer planets will be in this alignment as well tonight. But Uranus, a faint greenish dot which is difficult to see with the n-ked eye, will be so close to the high “midnight” star that is Jupiter that it will be lost in the glare without a carefully pointed telescope.

Tonight Jupiter will also be a “little” closer than at most oppositions, which come around about once every 13 months. That is, 75 million kilometres closer than it was last August, for example. Whether by proximity or just its own weather, the cloud bands of Jupiter have seemed notably brighter than usual in recent weeks and it will easily overcome the light of  a nearby nearly full moon.

But there is more than just coincidental geometry going on in this spectacle.

Earth’s atmosphere fell unusually still for Australian amateur astronomer Anthony Wesley on August 30 near Exmouth, and he captured an incredibly detailed image of Jupiter (below) showing the subtle colours and complex structure of its surface cloud layers with a clarity usually seen only from space using platforms such as the Hubble orbiting telescope.

Even with a modest telescope or binoculars tonight Jupiter will resolve into a tiny disc (if you use a tripod to eliminate hand-held shaking) and its four major moons will also be easy to spot.) 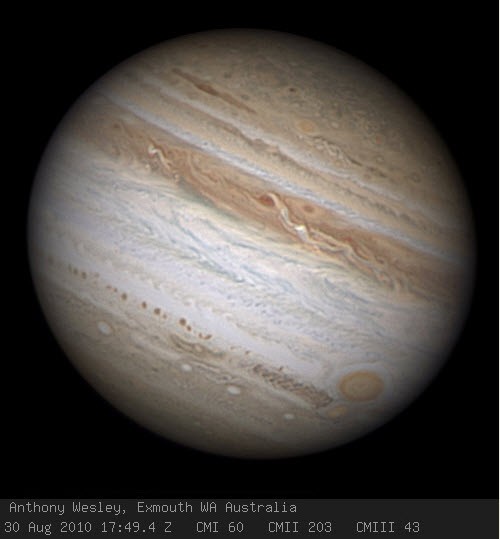 Jupiter has been ambushing astronomers with some amazing fireballs recently, appearing as bright points lasting a few seconds, as it scoops up micro asteroids or comet fragments with its immense gravitational field and incinerates them in huge releases of kinetic energy in its dense and turbulent atmosphere.

The first evidence of the impacts was caught by Wesley in July last year, when he spotted an anomalous smudge on the planet, which proved to be a debris plume from such an impact, and by coincidence, last June,  he imaged a bright 2.5 pinpoint flare caused by an actual hit.

Other sightings have since followed, leaving planetary scientists asking whether there is a sudden swarm of cosmic debris being absorbed by Jupiter, or just a chance clustering of the material that is always being dragged inwards by the planet, which is 1300 times the volume and 318 times the mass of planet earth.

For those under clear skies tonight, the apparent serenity of the midnight star and the nearby nearly full moon represent something very important to life on earth. Both are shields from some of the comets or asteroids that have strayed toward earth in the past and present.

If the human eye could see gravitational fields, Jupiter would not be a bright planet, but something as wide as a giant catcher’s glove, sweeping much of the ‘hood clear of some of the menacing balls pitched our way by such intruders.

P.S. Don’t confuse Jupiter with the evening star Venus, which will be high above the sunset while Jupiter is rising low in the east.

Dark matter: why the media bought NASA’s galaxy of lies about the Jupiter probe