Tyranny of the minority

A reason for referendums — the tyranny of the minority. When you accept that the first desire of  a politician is to be elected and that the second is to be re-elected, a lot of things about political behaviour become clear. Most importantly it does not mean that a politician is primarily concerned about what a majority of his or her constituents support. The calculation is about which voters might change their vote because of the decision the member might make on any particular issue.

In practice, the occasions when this tyranny of the minority manifests itself are on those rare occasions when MPs are allowed by their political parties to exercise a conscience vote. In determining what their conscience tells them on these occasions, parliamentarians cannot escape a calculation about what their vote will do to their re-election chances.

On moral matters — questions such as abortion, euthanasia and more recently stem cell research — which are the normal ones where conscience votes are allowed by the major political parties, the “antis” in the public are more likely to feel strongly about the issue than the “pros” and thus, the ones more likely to change their vote. Thus meant politicians, whatever their own views on the issue, will tend to vote in favour of self preservation rather than their own principles.

It was my understanding of this natural enough reaction of politicians that was behind my advice many years ago to euthanasia advocates to stop trying to get parliaments to pass laws legalising euthanasia. My client as a lobbyist at the time was the Northern Territory government whose Parliament had passed legislation to legalise euthanasia only to have the Federal Parliament over rule it.

This display of political self interest, or cowardice, call it what you will, suggested to me that the most likely way of getting change to laws involving moral issues was by way of referendum. The lobbying effort of the euthanasia advocates would have more chance of success if devoted towards persuading reluctant politicians to letting the people decide.

My view about this strategy has not changed and I expect that the efforts of Greens leader Bob Brown to repeal the federal legislation overriding the decisions of Territory governments to re-open the prospect of euthanasia laws will have great trouble succeeding.

Role model goes to rack and ruin. Where are poor old lefties going to turn for inspiration now? Not only has Sweden elected a right-wing government for the second time in a row but the winners actually campaigned on making the welfare state leaner with more income tax cuts and privatisations. The Social Democrats, for so many years the government that became the standard bearer for democratic socialism around the Western world, saw its vote slump as the people rejected its platform that the rich should pay more to fund schools, hospitals and care for the elderly. Then, to complete the humiliation for the left, Swedes elected 20 members of the anti-immigrant Sweden Democrats to the 349 seat Parliament where they could end up holding the balance of power.

Afghanistan: a sporting life. Why are we there? 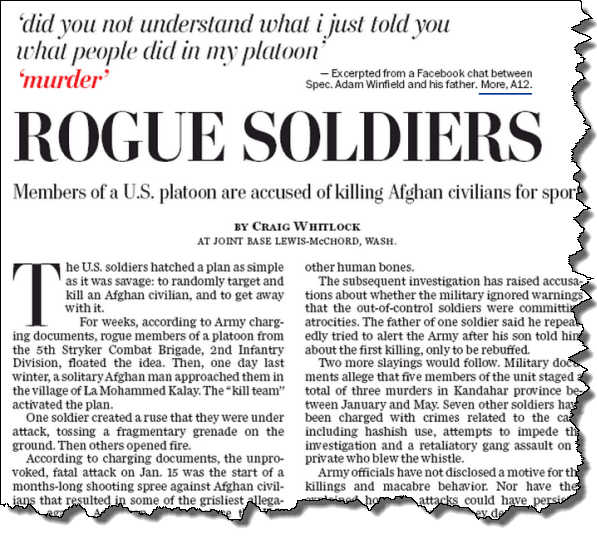 Australia’s Foreign Minister is in the United States pledging loyalty to our great and powerful ally. Back in Afghanistan, details are being revealed by the Washington Post of Afghanis being killed by US soldiers as sport.

The winning formula — witchcraft, masturb-tion and creating the earth in six days. They must be a strange lot those Delaware Republicans. Just have a listen and a read of some of the few espoused over the years by the state’s new Republican Senate candidate Christine O’Donnell, who won last week’s primary election with the support of the TEA Party movement and the endorsement of former Alaskan Governor Sarah Palin.

First up, a television appearance of a youthful candidate O’Donnell giving an example of her Christian views:

But before you dismiss her as not having life experience, have a listen to this clip from an appearance back in 1999 on a television show Politically Incorrect, hosted by Bill Maher, who now appears on Home Box Office’s Real Time from which this clip is taken: 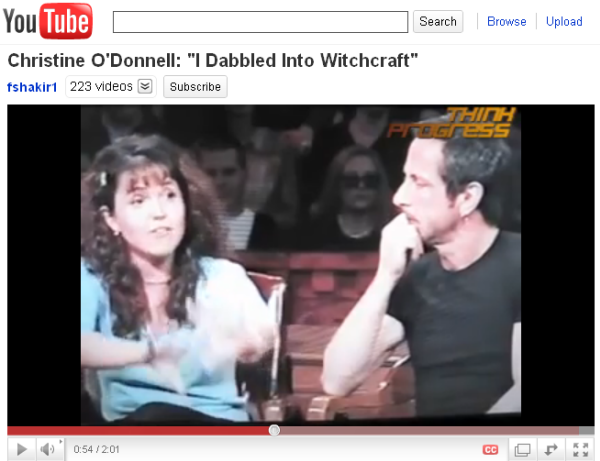 And to round out a portrait of the woman whose vote, should she actually become a Senator, would influence what happens to people around the world, New York Magazine last week provided some details of another of O’Donnell’s right-wing positions. Back on March 30, 1996, in her role as spokeswoman for the conservative Christian policy organisation Concerned Women of America, O’Donnell “squared off” on CNN against a university professor to advocate for teaching creationism in the classroom. In trying to debunk “every legitimate scientist in the world”, O’Donnell insisted “hard evidence” proves evolution is “merely a theory” and God’s creation of the world in “six 24-hour periods” is fact:

O’DONNELL: Well, as the senator from Tennessee mentioned, evolution is a theory and it’s exactly that. There is not enough evidence, consistent evidence to make it as fact, and I say that because for theory to become a fact, it needs to consistently have the same results after it goes through a series of tests. The tests that they put — that they use to support evolution do not have consistent results. Now too many people are blindly accepting evolution as fact. But when you get down to the hard evidence, it’s merely a theory. […]

Now, he said that it’s based on fact. I just want to point out a couple things. First of all, they use carbon dating, as an example, to prove that something was millions of years old. Well, we have the eruption of Mt Saint Helens and the carbon dating test that they used then would have to then prove that these were hundreds of millions of years younger, when what happened was they had the exact same results on the fossils and canyons that they did the tests on that were supposedly 100 millions of years old. And it’s the kind of inconsistent tests like this that they’re basing their ‘facts’ on. […]

Well, creationism, in essence, is believing that the world began as the Bible in Genesis says, that God created the Earth in six days, six 24-hour periods. And there is just as much, if not more, evidence supporting that.

Not quite a gay marriage victory

The thing that annoys me most about these dingbat groups that arise from time to time in the US is that their garbage is almost always picked up by some paleo-con wannabe in Australia. Chris Berg, of the Institute of Public Affairs is the most recent offender, with a hagiographic rant on the Tea Party in the weekend SMH. In his quixotic effort to paint this outfit as something along the lines of a routine conservative, small-government Republican push, Berg chose to ignore the clear manifestations of racism and xenophobia that characterize its activities. He cited a poll result that indicated that most members of the Tea Party are “well-educated” or “believe Sarah Palin is unqualified for the presidency”. First, how in hell does anyone know who the members of this populist rabble are anyway? Second, anyone with half an eye on the doings of this group would have twigged that the conclusions of the poll are patently absurd. Clearly the sample used for its survey did not capture the nature of this ugly, Palin-adoring political movement. No problem for Berg, though, who motored on through these teetering piles of crap as if it all could be true.

Take a cold shower, Chris. Then find a real sample of this group, ask them questions like “do you think blacks and other minorities in America have gained too much power?”, or “should America protect its domestic industries from overseas competition?”, or “what do you think should be done about Muslims in America?” and you would quickly find out how ignorant and dangerous these people are. Assuming, that is, that you have the slightest interest in trying to find out the truth about them.