Implementation of income management reforms has just meant one more round of racist, humiliating interaction with government bureaucracy for communities suffering under the intervention, writes Paddy Gibson.

The new system of income management designed by the federal Labor government has been progressively rolling out across the Northern Territory since the start of August.

The new system is allegedly “non-discriminatory”, applying to all welfare recipients across the NT and potentially Australia.

It is also supposed to soften the grip of income management on “prescribed” NT Aboriginal communities. On paper, people on aged and disability pensions are now exempt.

Implementation of these reforms, however, has just meant one more round of racist, humiliating interaction with government bureaucracy for communities suffering under the intervention. Centrelink is doing all it can to keep Aboriginal people on the system.

Last Friday, September 17, I went into Centrelink with some elderly women from Ilparpa town camp on the southern fringe of Alice Springs. These women have long complained about the BasicsCard making it harder for them to access their pension and deeply resent their lives being taken over by the NT intervention.

Centrelink has been telling Aboriginal organisations in Alice Springs that 70% of Aboriginal pensioners in Tennant Creek and the Barkly region have “volunteered” to stay on the new income management system.

After our experiences on Friday, I’m genuinely amazed that 30% managed to escape.

Over the next four years, $350 million is being spent on income management in the NT alone. A reasonable slice of this must be being spent on marketing. Alice Springs Centrelink is full of advertisements promising good health, pride and happiness for those on the BasicsCard. 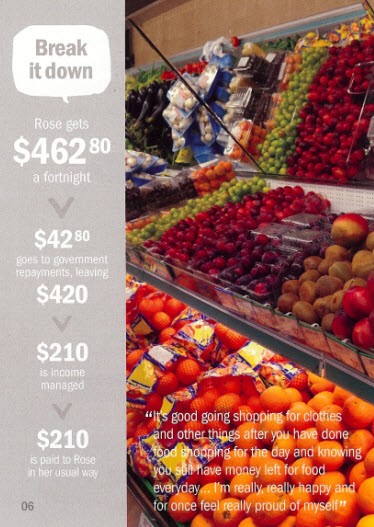 May, who is 76, asked me to come and sit in at her interview with the Centrelink officer. Fluent in several Aboriginal languages, she speaks only broken English.

The man behind the counter was friendly.

“You want to check your balance on your BasicsCard?”

“No, the BasicsCard is no good. I want to stop.”

“Oh, your BasicsCard isn’t working. No worries I’ll get you a new one.”

There are so many problems with BasicsCards not working that Centrelink hands replacements out like lollies.

He came back with a shiny new card, gave May a form to sign (which she did) and got her to punch her preferred pin number into the computer.

I said, “excuse me, but isn’t there a new system operating? Perhaps you could get an interpreter to explain to May what her rights are if she wants to come off the BasicsCard?”

“Look I’m just not doing that any more. Only two of the 30 or so people I asked actually came off, because if they stay on they get a bonus.”

He was referring to a $250 “incentive” payment that pensioners will get every six months if they decide to sign up for “voluntary income management”. The Ilparpa women had heard this payment was being offered to other people and dismissed it as a “bribe”. But it’s a lot of money for any struggling family.

There was no Warlpiri interpreter available, so May talked straight for herself.

“I want cash. BasicsCard is rubbish. I am a non-drinker and I don’t gamble, I’m a Christian woman.”

This began a 15 minute tug of war, with the Centrelink officer pulling out several stops to try and convince May to stay on the card.

He turned around his computer to show May the list of “essential items” she could spend her BasicsCard on.

“I get paid wages, but I have to buy clothes and food too. See, it’s no different. It’s like we’re all on income management really.”

“I want cash,” she kept insisting.

“I’ve worked with communities for 25 years,” he was talking to me now.

“People come under a lot of pressure to hand their money over to their family.”

He tried one last angle, “well if you come off the system, we won’t be able to pay your rent anymore.”

Before income management, many Aboriginal people had their rent deducted directly from Centrelink under a voluntary system called Centrepay. Apparently, this is no longer an option.

Asking questions, we found out that you can arrange direct deduction by talking with NT Housing. But Centrelink will not assist to make these arrangements — unless you stay on the BasicsCard.

Worn down by the argument, the Centrelink staffer did not actually know how to take May off the system. It took three staff crowded around his computer for another 15 minutes before everything was sorted.

One was a supervisor, who asked the Centrelink officer if he was sure May wasn’t “vulnerable”.

Pensioners assessed by front-line Centrelink staff as being “vulnerable to financial exploitation” can be kept on the new system against their will. Racist assumptions about Aboriginal people being unable to look after their money continue to underpin income management.

Two other Ilparpa pensioners were not as lucky as May with their negotiations and are still on the card.

I interviewed Biddy when we got back to Ilparpa camp. Biddy is very elderly and can’t walk without a frame because of a recent operation on her leg.

When you went to Centrelink today, what did you tell them?

I told them I want to cancel that BasicsCard. I want cash. But they said, ‘no, no, no, no’. The lady told me, ‘we can’t cancel this BasicsCard’.

Why did she say that?

She said it’s because of the bonus. And also the rent.

What did she say about the bonus?

No, I wanted cash. I don’t like the BasicsCard.

Why didn’t she listen to you?

Because I’m a cripple person. I’ll try again next week.

I also accompanied Lydia during her Centrelink interview. She has serious hearing problems and struggles to understand English. We were told that she had “volunteered” for income management at a previous appointment on September 1.

Once you “volunteer” you can’t come off for at least 13 weeks. Despite having no recollection of her “decision”, Lydia now has to go through a formal appeals process to be taken off the BasicsCard. The appeal is being processed in Tasmania.

The Centrelink officer was most apologetic. After checking Lydia’s record, it was revealed she was actually the officer who had “volunteered” Lydia two weeks previous.

On Saturday, I saw my friend Donald at a service station and explained the ordeal to him. He receives a disability pension and lives at another town camp. Donald is very confident and fluent in English. But he, too, had to argue hard with Centrelink to be taken off the BasicsCard:

“They kept telling me it was good for me. That I was doing really well with my finances since being on the card. They’ve got no idea. I’ve had that much trouble with bills since they took control.

“I can speak up for myself. But the others, they’ve got no chance.”

Workers say they’re being ripped off under indigenous housing program

So I gather you would all prefer for them to be given “food stamps” in stead. clearly people of all races and colour who have a history of mismanagement of tax payer funded income should have their income “managed”. If you don’t like it, how about earning your own money for a change.

If it’s so good for people, let’s run a pilot programme for for the public service – starting with Centrelink NT offices

Lorna, I am not sure that you read Paddy’s story properly, these three people are pensioners who according to Australian law are now allowed to control their own pension income in the Northern Territory. Despite a number of inducements to stay on BasicsCard they seem to want to exercise a choice to exit income management and manage their own pension income like other Australians do. I think that Paddy’s observations are very important because they show an institutional reluctance to allow the new income management laws to work in new ways. This may just be ‘path dependency’ but it may also reflect unintended institutional barriers to return to the old system. Next time Minister Macklin’s office issues a media release on how many pensioners have chosen to remain with income management and the Basics Card re-read this story, Paddy has done us all a service with an alternate narrative (not the only one) from community.

bloody disgraceful , not every body waste their money ,

this so un fair to all in concern

the goverment is using your land for nucular waste ,

have the leased this land from the traditional land owners

the goverment just gave the Aslyum Seekers $100,000.00 dollars in compensation and their was 50 of them, that received this money in the last 2 years.

and the goverment make these people the aboriginal people have a basic card to live from ,