Here’s to your health … or not

An analysis of Australian media coverage of media matters has found that commercial current affairs television does by far the least satisfactory job.

And last of all comes commercial television current affairs. Well, what a surprise. An analysis of Australian media coverage of media matters has found that commercial current affairs television does by far the least satisfactory job. A group of academics, operating as Media Doctor, have published the findings of their media analysis Does It Matter Who Writes Medical News Stories? in the current issue of PLoS Medicine.

In the belief that the media can influence health literacy and health-seeking behaviours, they examined whether experienced specialist health reporters write better stories than other categories of journalists. In their summary they conclude:

We compared the quality of stories written by specialist and non-specialist journalists, and those sourced from major news organisations, in Australia from 2004–08.

We found that it does matter who writes news stories that cover the benefits and harms of health care interventions. Stories written by specialist health journalists working for a single media outlet scored more highly than those written by less experienced writers.

Our findings are important because this source of health literacy is currently under pressure as falling revenues threaten the future of the traditional media. 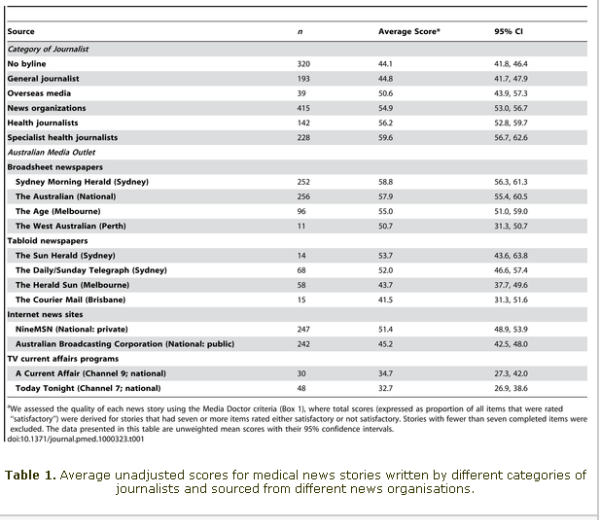 Humiliated by Oprah Winfrey. I have failed miserably on the Oprah Winfrey test. In preparation for her visit to Australia the great performer put up a little know your Australia test on her website and I stupidly agreed to test my knowledge. 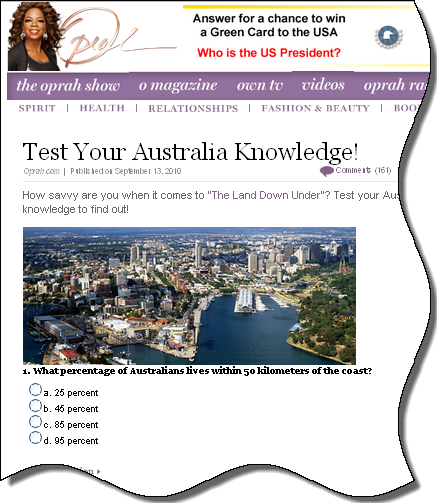 Rather shamefacedly I confess to getting only four out of 10 answers  correct. Have a go yourself but no Googling please.

An opportunity missed? The notion of having an independent speaker for the House of Representatives is starting to look shaky already as the Opposition starts back-tracking on its support for a better-run and more relevant Parliament. It now looks as if the Independent Member for Lyne Rob Oakeshott will not get the support of Liberals and Nationals when the choice has to be made. That will be a pity.

Death and destruction in Pakistan and nobody cares. Kevin Rudd has gone off to Pakistan as a way of expressing Australia’s support for that country struck by floods but Australia as a whole seems to care little about the many millions who are now suffering. It is hard to know why but there is not the normal sympathy I would have expected.

Perhaps Joseph Stalin had the answer when he once claimed that a single death was a tragedy, but a million deaths was a statistic. New research from the Kellogg School of Management at Northwestern University validates this sentiment, confirming large-scale tragedies don’t connect with people emotionally in the same way smaller tragedies do.

The new study, entitled “The Scope-Severity Paradox: Why doing more harm is judged to be less harmful,” has been published in the current issue of Social Psychological and Personality Science (published by SAGE) and was conducted by Loran Nordgren of the Kellogg School of Management and Mary-Hunter Morris of Harvard Law School.

The researchers found that a “scope-severity paradox” exists in which judgment of harm tends to be based on emotional reactions, and thus people have a stronger emotional response to singular identifiable victims rather than to an entire crowd of sufferers.

I thought the other Australian study looking at health journalism that was published this week in BMC Public Health was more edifying because it didn’t rely so heavily on rating scales and gave greater insights into how specialist health journos perceive their role. It was also more frank about the limitations of specialist journos; that whilst they have specific content knowledge they’re often more likely to act as gate-keepers and may be less willing to tackle non-biomedical health stories.

It’s covered in some detail on Croakey.

“Incontinents at the Opera”?
Weren’t we taught in school that “Australia is the largest island and the smallest continent”?
And if Europe 10,200,000 sq kms : Australia 9,010,000 = “10% smaller” (or close enough) – this is an example of the manifestation of the sort of education Gillard was wanting to clone?

Ben, you beat me to it. I was just about to refer Richard’s readers to the Croakey post. Thanks for getting in first.

What a strange coincidence, two studies by two different groups in Australia investigating health reporting and reaching some similar conclusions. All in the same week or so.

The American Association of Health Care Journalists has also covered these two studies.

Oprah Quiz.
I only got 4 correct but actually I reckon it was 6:

[Australia invented……aspirin (1915)]
As a biochemist/biomedical research scientist I was pretty sure about this one. And I still am. 1915! Here is Wiki:
“A French chemist, Charles Frederic Gerhardt, was the first to prepare acetylsalicylic acid in 1853.”
And no one “invented” it, it was discovered, just like penicillin was another discovery (not by an Australian as the Oprah answers say, since it was discovered by Fleming then a decade later the Australian Florey in Oxford worked on a practical purification scheme, with his employee in Oxford chemist Ernst Chain, all three sharing the Nobel.)

On the Oprah comments: (this comment gets several things wrong too….)
[MJDwyer39 : challenge aspirin. Aspirin was invented by a German prior to WW1. When war was declared all German patents were annulled in the British Empire. Shmith and Nicholas synthesised aspirin, but did not invent it.]

Shmith and Nicholas were Australian pharmacologists/chemists and they were not the first to synthesize it (previously it was extracted from plants) but their method gave the purest product. Even so, same old story it was Bayer the german company who patented it and made a fortune…..

Whew! Pleased to report a score of 8 in the Oprah quiz. I thought we had 100% of the world’s opals (actually 95%) and, in my excitement, wildly overestimated the number of plant species (it’s 25,000).

I’m not sure our nation will remain unscarred by the December visit if someone doesn’t tutor those Yanks beforehand that we are not Ossies.