A government restriction on press freedom has finally forced News Limited to sell the Fiji Times to a local businessman. Plus, Nokia cuts HTC's lunchbox and other media news of the day.

News Ltd. reluctantly sells Fiji Times A government restriction on press freedom has finally forced News Limited to sell the Fiji Times to a local businessman. In an article today, The Australian reported that “the editorial independence of the Fiji Times is likely to be put under even greater pressure” as News Ltd  relinquishes control of the paper. The move comes as no surprise after the Fijian government’s introduction of highly restrictive media laws in June this year, which threaten jail time for any journalist reporting news against the ‘public interest,’ and stipulates that Fijian media must be at least 90% locally owned. According to The Australian, “it is believed News will receive $10-$20 million for the Fiji Times, although the sale is subject to regulatory approval.”– Crikey intern Nick Johns-Wickberg

Nokia cuts HTC’s lunchbox A report in The Age this morning shows that, when it comes to dirty marketing tactics, mobile frontiers Nokia and HTC aren’t above a bit of ‘they started it’ argy-bargy. After HTC sent buses to pick up journalists from a Nokia showcase event earlier this week, the Swedish giant retalliated, handing out lunchboxes to journalists attending an HTC launch and labelling them ‘HTC Press Conference Survival Kits.’  According to The Age, the lunchbox included an “HTC sandwich (“ham, tomato and cheese — not the most exciting sandwich”), an energy bar (“in case you need a boost”), a giant foam Nokia finger (“to use during the Q&A”), a pen and a pad (“for doodling”) and ear plugs and an eye mask (“in case you feel snoozy”).” — Crikey intern Nick Johns-Wickberg

Vox pop of the day: The public speak out on petrol prices at The Geelong Advertiser, while John Wood inadvertently reveals his age… 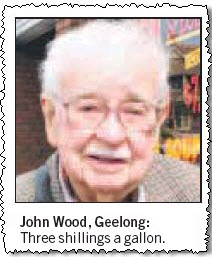 While up north, The Gold Coast Bulletin hits the streets to talk all things O:

“A survey by the Pew Research Center for the People and the Press found that 33 percent of respondents paid very close attention to the plans to burn the Koran, and another 25 percent paid “fairly” close attention.” – The New York Times

“A real plant called “Meet Eater” is watered when Facebook users become fans and post on its wall, in an interactive project at Queensland state library that aims to explore the emotions involved in using social media” – The Sydney Morning Herald

“Rupert Murdoch famously said in August that iPad was a game-changer for news media. Clearly, as you would expect of him, he wants to be a player in that new game” – The Guardian

What is more remarkable than the long term memory of John Wood above, is those people who can not remember petrol being cheaper that $1.20 or $1.10 per litre.