Confidential Age circulation data shows Fairfax Media bulk-distributed more than 47,000 weekday copies of the newspaper to schools and universities in 2007, despite reporting just 1,640 education copies to the Audit Bureau of Circulations.

Confidential Age circulation data shows Fairfax Media bulk-distributed more than 47,000 weekday copies of the newspaper to schools and universities in 2007, despite reporting just 1,640 daily education copies to the Audit Bureau of Circulations.

The fresh documents, obtained by Crikey, spell out the full extent of the newspaper’s strategy to inflate its circulation, with subscriptions broken down into “Home Delivery”, “School Delivery” and “Tertiary Pick-Up” categories. The Age is not required to report the breakdown to the ABC.

On a Wednesday of one week in 2007, according to Fairfax, 39,060 copies of The Age were bulk-delivered to schools and 6,669 sent to universities. But on that day the paper reported education sales as “0”. Education sales were officially listed as 8,200 for the previous Monday creating a weekday average of 1,640 — the actual figure sent to the regulator. 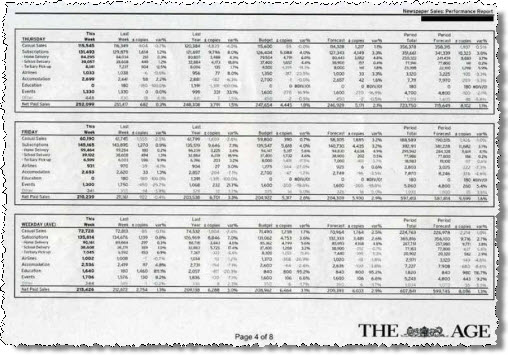 Under a loophole in official ABC guidelines amended in 2006, The Age is not required to report the bulk deliveries because the subscriber’s name and address is collected by newsagents and recorded in Fairfax databases. The officially reported education sales relate to deals with institutions, rather than individuals.

The real education figure chafes with the audited Ernst and Young data that The Age uses in conjunction with Roy Morgan readership data to broker deals with advertisers.

Yesterday, The Age denied it was in breach of the guidelines and rejected suggestions that advertisers were being overcharged. Crikey had earlier revealed a leaked email quoting a senior Fairfax executive, who still works with the company, who stated the newspaper would be forced to “write down” its revenue by 20% if the real breakdown ever became public.

Other internal documents from 2004, also published by Crikey yesterday, confirm that the company has been secretly routing about 35,000 copies through the channels for years. The scheme, which began in the mid-1990s, was rolled out again this year however, Fairfax refused to confirm the current volumes when contacted by Crikey.

The ABC, which sets the definitions for reportable categories, and includes four Fairfax staffers on its general committee, is now under mounting pressure to change the rules.

ABC chief Paul Dovas told Crikey that advertisers could petition for a rule proposal change which could lead to a meeting. He said the issue was expected to be discussed at the body’s Annual General Meeting in October.

“This is a wider discussion for the industry to decide upon,” he said. “There a lot of factors that go into that including whether it’s cost-effective to it…that decision is made collectively by the industry.”

Steve Allen of Fusion Strategy said he expected the Media Federation of Australia, which represents advertisers on the ABC, to investigate the allegations “within the week” but that at present he was “not terribly concerned” by the revelations, and “until Crikey tells us otherwise” he believed the ABC rules were sufficiently transparent.

Asked about a scenario in which newsagents – who are paid full tote odds on discount subscriptions – having a vested interest in finding out the names of  local teachers and students so that discount educational drop offs could be counted as individual subscriptions, he agreed that “that might be going on” and that there was nothing in the ABC’s change of rules that would prevent it.

If this was happening, and if all newspapers were doing this, it would be “terribly disturbing”.

As Crikey reported yesterday, newsagents are keen to maintain the system as it currently stands. The editor of the industry’s popular Newsagency Blog, Mark Fletcher, told Crikey that for each copy of The Age delivered to schools and universities, the newsagent pockets 25% of the cover price, despite Monday-Friday school subscriptions costing just $18 a year for teachers and $15 a year for students. University students are charged $30 and full-time academic staff $45 – a saving of over 80% on the newsstand price.

Fletcher said that the thousands of tertiary copies not picked-up each day were returned to newsagents unread, but were still included in The Age‘s official circulation data.

He backed a call for a more honest ABC definition: “I would absolutely want an honest circulation figures and the current figures fall far short of that,” Fletcher said.

Meanwhile, two leading newspaper editors have condemned The Age and called for an immediate investigation. The Australian‘s head of Corporate Affairs, Stephen Browning said The Australian‘s student subscriptions were minuscule compared with his Fairfax counterparts:

The Editor of The West Australian, Brett McCarthy, also supported an investigation, saying that all copies of his paper were accounted for in the proper categories:

“The West does not bulk deliver any newspapers to universities or schools under any scheme where they are counted as individual sales or subscriptions. Any Newspaper in Education copies are reported separately in the ABC audit as is required. The copies are all paid for and ordered by the schools for educational purposes. Universities do not participate and we don’t deliver in bulk or for free to any of them.”

“I think it is fine for the ABC to investigate this issue and tighten their definition or rules if required,” he said.

Meanwhile, the free newspaper sightings from Crikey readers — over one hundred so far — are pouring in, we’ve started plotting them on our Tracker here.

Think this is worth the coverage, although the media writing about the media is more common than need be these days. But does Crikey have a conflict worth revealing? ie what does Crikey get out of the substantial reduction in Age/Fairfax/old media advertising revenues?

Paragraph six – I assume ‘copes’ should be ‘copies’.