In just a few short years the super conservative and sometimes a little kooky Tea Party movement has come to dominate the political landscape in the US. And now it's gunning for control of the Republican Party, following massive wins for Tea Party supported nominees at yesterday's US Primaries.

In just a few short years the ultra conservative Tea Party movement has come to dominate the political landscape in the US. And now it’s gunning for control of the Republican Party, with yesterday’s US Primaries providing a massive win for the Tea Party supported nominees.

Have the normal leaders of the Republican Party lost control? Is the party lurching even further to the Right? The latest results have the GOP establishment in a conservative conniption.

Mike Castle, a US Republican Senator for Delaware since 1993 lost out in favour to newcomer Christine “mast-rbation is a sin” O’Donnell, one of Sarah Palin’s famed Mama Grizzlies. And he wasn’t the only Republican Party casualty overnight.

Karl Rove has already launched an attack against O’Donnell, blasting: “There were a lot of nutty things she has been saying that don’t add up…”

O’Donnell had a few choice words for the likes of Rove, telling The Guardian just hours after her victory: “The Republicans have lost their way…They have abandoned the principles on which our country was founded. The party establishment died last night.”

It’s looking messier than the Turnbull v Abbott saga. Should the Republican Party be worried about this hijacking? Absolutely, is the general consensus from the commentariat.

Dan Balz at the Washington Post immediately opens with words of war. “Call it a civil war, an insurrection or merely an insurgency. By any measure, the establishment leadership of the Republican Party has lost control and is now being pulled along toward an unpredictable, uncertain future.”

It’s confusing to examine exactly how positive or negative this win for the Tea Party will play out for the Republican Party overall, notes Chris Weigant at Huffington Post. “‘The hostile takeover’ of the Republican Party by the Tea Partiers continues apace. Except, of course, where it doesn’t. Like much else about the entire Tea Party movement, it’s hard to pin down exactly what is going on and what it all means,” says Weigant, as he offers five different ways that these races will pan out.

Is this rift within the Republican Party simply going to be a win for the Democrats? “…privately, Republican strategists conceded that her victory may put Delaware out of reach for them in November, and grumbled that the development could hurt their already remote chances of taking over the Senate from Democratic control,” reports Michael Shear in the NY Times.

The result is an epic win for Obama, declares Andrew Pavelyev in FrumForum. “The real action in this election cycle was in the Republican primaries, they are almost over, and we already know who won: (drum roll, please!) President Obama. American conservatives have suffered a crushing and lasting defeat. The center of gravity in American politics has shifted permanently and irreversibly to the left (and conservative ideology will eventually follow).”

Conservative columnist Tunku Varadarajan agrees in The Daily Beast, saying Republicans have cut off their nose to spite their face. “Confirming the truth that primaries are but a sweaty, vulgar contest in which ideological bully boys stomp to the forefront, Republican die-hards have voted for ‘purity,’ an elusive concept at the best of times, but in this context a vote for suicide.”

That’s because the Tea Party movement isn’t working on successful campaign strategies or brain storming election ideas. “If anything, it seems that the Tea Party is very interested in standing on what it sees as core ideological values, and worry about election strategy does not fit with that emphasis,” says Dr. Brian Calfano from KOLR/KSFX.

A recent poll by YouGov for the Economist breaks down the average Tea Party supporter into a handy infographic. 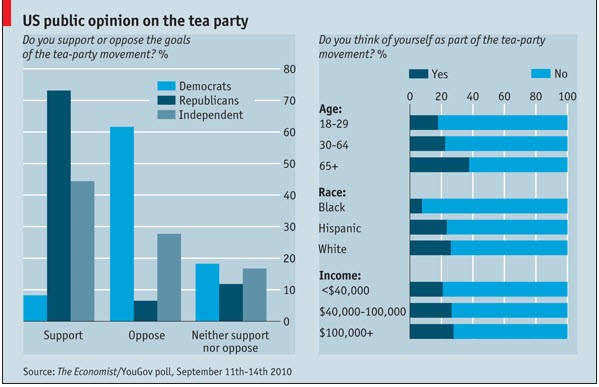 Time for the Republican Party establishment to take a long, hard look at itself, says Politico‘s Jonathan Martin. “Aside from the political implications of the upset, the outcome prompted a round of deep Republican soul-searching about what it said about their party when a political pillar in Delaware like Rep. Mike Castle, a respected lawmaker who was considered a shoo-in for the Senate seat, could not even come within six points of defeating the controversial and still largely unknown O’Donnell.”

With the Republicans bickering amongst themselves, a wide spot in the political centre just opened up for Obama.

Herman Cain isn’t serious, but that might not stop him

Tea Party has 40 year plan, but will they last that long?

Rick Perry and a world where stimulus is partisan treason

The US gets its very own Pauline Hansons!

I’d be very surprised if the Tea Party can produce any lasting electoral impact. Just as the American Left thought Obama would make the nation a progressive paradise overnight, the Right now thinks Ron Paul and co will immediately be willing and able to abolish taxes and make Christianity mandatory for any public office or service.

When they just get another lot of business-owned hedgers the Tea Partiers will return to the standard two party mode.

I don’t think it’s as simplistic as that at all.

What you’re seeing in effect here is a revolt & awakening among the voters of the western world.

Hung parliaments in Australia and the UK, increases in votes for minor parties, rise of anti-distablishment political movements.

It’s all fine, fair and good to assume this is simply a storm in a teacup, but I think it would be naive to think the movement has no creedence or cannot form a paradigm shift among the people.

Let’s face it, the political left/right bullshit system today representing so called ‘democracy’ is a farce, a measure of placation of the masses into a false illusion of choice when realistically speaking, there is no choice.

You honestly think Australia is any different? John Howard was thrown out in a landslide under a voter revolt and when Rudd stepped in, did he really change anything set in place by John Howard? What laws were repealed? What policies of the former government changed?

Naturally, Rudd fell out of favour with the people and was removed and here we are in 2010 with another unpredictable election result.

Fact is, political powers in the western world are being seen for the charade they represent. They are NOT true representatives of the people, they are window dressing for fascist regimes who have agendas for their financial supporters.

Ever wondered why Australia doesn’t want to touch housing affordability? Doesn’t give a damn about infrastructure? Rolls out the red carpet for foreign investment? Offers financial incentive to breed when we’re basically full? Actively promotes our education system abroad as a back door immigration tool?

If you still can’t work it out, then the entire concept of the rise of new political movements won’t make sense to you anyway.

When the middle class awakens to the fact they’re being systematically wiped out by the elite they revolt.

Rise of alternative political parties to power signal such revolt.

Read between the lines people and drop the assumption that loss of faith in the political process is merely the domain of dissenters and tin foil hat wearers, because it’s simply not true.

Else you may as well remain a placated debt slave to your masters behind the political process.

The Tea Party must be about the only mid-term hope the Democrats have left. Hopefully more tea baggers will get up in the primaries and scare mainstream conservatives out of voting for the GOP. I predict the conspiracy theories about the tea baggers being an elaborate liberal front to start the day after the election.

I hope the Tea Party is an elaborate liberal front. That’d be great.