Under Labor’s NBN, the "vast majority of users", 93% of them, will have the opportunity to use fibre capable of speeds of up to 1 gigabit per second. Under the Coalition’s policy, those users will get … well … who knows?

Malcolm Turnbull as opposition communications spokesperson was a brilliant if obvious appointment by Tony Abbott. Turnbull can begin his critiques of Labor’s National Broadband Network (NBN) by asserting his credentials as “one of the founders of OzEmail, Australia’s first big internet company” and then hope his glorious brilliance will blind us from noticing that he’s trotting out familiar dodgy talking points.

Take, for example, the one posted on his blog before the election but getting exposure today at ABC’s The Drum.

Turnbull can be forgiven for larding this piece with the tired old political rhetoric about Labor’s “waste” versus the Coalition’s “affordable” policies. It was an election campaign, after all.

Hence, Turnbull labels the NBN a “white elephant”, “the most expensive network in the world”, “too good to be true”, “taxpayer-funded spree”, “simply too risky”, “no benefit to taxpayers” blah blah blah-di-bloody blah.

What Turnbull should not be forgiven for is telling fibs about the differences between the Labor and Coalition policies.

“Just because the Coalition’s total spend is less doesn’t mean the vast majority of users will be worse off. On the contrary, most will have access to privately provided broadband services virtually indistinguishable from Labor’s — but at a much lower cost,” Turnbull writes in one of the few paragraphs that addresses the actual policy.

Under Labor’s NBN, the “vast majority of users”, 93% of them, will have the opportunity to use fibre to the premises capable of speeds of up to 1 gigabit per second today and upgradeable to greater speeds in the future.

Under the Coalition’s policy, those users will get … well … who knows? Turnbull’s predecessor Tony Smith pointedly refused to state which areas would get what speeds because, of course, that would be decided by the market. But one thing was clear. Unless the market decides you’d get fibre, you’d be stuck with ADSL2+ at 20-odd megabits per second if you’re as close as possible to the exchange and much less otherwise. Or hybrid fibre-cable (HFC) at 100 megabits per second tops if that’s already in your area. Or fixed wireless at a whopping 12Mb/s.

Either way, you’re on technology that will always be slower than fibre.

And they’re downlink speeds, of course. None of those technologies offer uplink speeds offer anything more than a couple Mb/s up. Only fibre does that. Only fibre can provide, say, the sustained 7Mb/s uplink speed required by high-definition video conferencing.

In other words, Turnbull’s claim that the services available would be “virtually indistinguishable” is wrong. Not good enough.

Provide a focused, sustained critique of Labor’s NBN without appearing merely negative — especially when the key independent are slathering to get that fibre. It shouldn’t be too hard once we start seeing more data.

Present an alternative policy that doesn’t look like it was cobbled together in a last-minute pre-election panic.

It shouldn’t be too hard, given Turnbull supposedly has a clue about this stuff. As long as egos can be held in check. 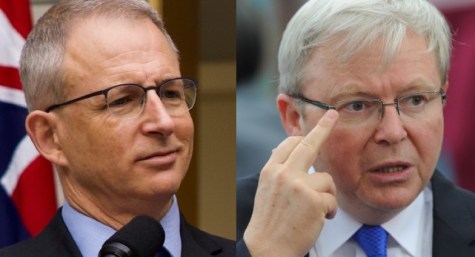 Remember when fibre to the home was evil? A decade on, Liberals eat their words

Of course it won’t come in on budget. No one can prove the cost of a project as big as this in advance of project start up.

Of course some buildings will get wireless instead of fibre-to-the-lounge-room in cases where that is the best solution.

Of course some people will not use the high-speed, but other occupants of the building might. ..and the next inhabitants might.

Wireless is not as good as fibre. I have copper and wireless in my home office and the connect and download times are better with copper.

I don’t see a tower at the end of my street as the ideal solution because half the occupants are business houses and some of the residential is apartments.

Turnbull’s criticisms since assuming the shadow has been of the lack of a business case for the national broadband network, which has more substance.

However, I’m not sure that a business case was produced for the Snowy Mountain scheme and Howard proceeded with the Adelaide-Darwin railway even when the figures showed that its profit would be as small as a flea’s balls, as I think a transport magnate put it.

Tony Abbott said on AM this morning that if Malcolm can demolish the NBN no-one would be more delighted than he. I think that tells us where this debate is going. The quality of data services will have nothing to do with it. Abbott’s a wrecker, nothing more and in accepting this appointment, Turnbull has become Abbott’s tool

Ah yes. The real Abbot has raised its ugly head already. Get ready for more of the same rhetoric people. This guys will stop at nothing to win an argument and uphold his fanatical ego, even if its not in the public interest. Good strategy though to put Turnbull in the position, if he succeeds Abbot the destroyer is triumphant, if he fails its throw the rival on the “no can do” scrap heap! I cant believe Malcom fell for that one!

@Observation: My esteemed colleague Bernard Keane has previously noted that Mr Turnbull’s political skills may not be the sharpest, despite his clear abilities and intelligence in other areas. Perhaps this is one of those Turnbull Oops Moments…