Confidential Fairfax documents reveal advertisers in The Age newspaper could be losing millions of dollars each year due to a lack of disclosure around circulation figures.

Confidential Fairfax documents reveal advertisers in The Age newspaper could be losing millions of dollars each year due to a lack of disclosure around circulation figures.

A 2007 internal email marked ‘Sensitive Information’, and obtained by Crikey, admits the company was charging 20% more for ads than they’re worth because it distributes 40,000 “educational” copies to Victoria’s schools and universities each day — over 30 times more than it was publicly disclosing.

The email, sent to senior Fairfax executives, spells out in detail the full extent of the scheme, and warns of “a significant risk to the business” and the broader newspaper industry if the 40,000 figure was ever revealed.

Its author, who cannot be identified for legal reasons, refused to comment when contacted by Crikey, citing the document’s confidential nature. He did not deny he had written the email when its contents were read out.

“We would make the total volume of copies going through these channels a matter of public knowledge … we would effectively write down the value of advertising in weekday editions from 200,000 circulation to 160,000 circulation, causing a pretty hard sell for the advertising team,” the email says.

“The flow-on effect would also affect the Sydney Morning Herald and probably every major masthead in Australia in a similar way — not so bad for your publication if you aren’t quite so reliant on advertising revenue (aka News Ltd) but a big problem for Fairfax.”

The Age’s current advertising revenue is about $203 million, including $125 million from classifieds and $78 million in display ads. A 20% decline would see that figure tumble by $40 million to $160 million, and unnerve Fairfax shareholders.

For years, observers have speculated on the number of newspapers sent by Fairfax and News Limited to universities and schools — but the figure has never been made public due to a loophole in 2006 Audit Bureau of Circulations definitions which permit the sales to be recorded as regular subscriptions.

The ABC classifies an education sale as “an arrangement by or with the publisher of the publication for distribution at a learning institution”. But because The Age deal is technically with an individual, rather than a school or university (names and addresses are collected from the student and they are issued with a “subscriber card”), the real number — which must be listed separately in ABC reports sent to advertisers — doesn’t appear.

According to the latest audited ABC data, The Age attributes just 0.36%, or 711 copies, of its Monday-Friday circulation of 197,500 to educational sales. But another Fairfax internal document, also obtained by Crikey, shows that on the week ending November 21, 2004 the company sent around 35,000 copies through the secret channels.

The schools and universities program referred to in the 2007 email began in the mid-1990s and is still operational, but a Fairfax spokesperson refused to confirm current 2010 figures for the scheme when contacted by Crikey, citing commercial-in-confidence provisions.

The email says if the true figure of a fifth of The Age‘s total circulation was ever disclosed, advertisers would become irate: “If we did declare that 40,000 copies of the section were being distributed to students, teachers and other education-related customers then it would not take long for someone to notice the disparity.”

“This would mean that we would have to disclose to advertisers that any ads booked to appear … would reach a volume of approx. 40,000 consumers … public disclose [sic] … is likely to cause significant risk to ad revenue across all weekday editions.”

Ikon Communications managing partner Ben Willee, who says his company spends “tens of millions” of dollars a year with Fairfax, told Crikey the true figure would have an “enormous impact” on the rates negotiated by advertisers. A 20% decline in The Age‘s actual circulation would be directly reflected in ad rates, Willee said: “We tend to trade on a cost-per-thousand basis so if circulation dropped a huge percentage, we would expect our rates to drop by a similar amount.”

“That’s an enormous blow for them because it will continue to erode their revenue base with buyers. We’d be very disappointed with them and it’s enormously concerning. You’re really lifting the lid at time when we’ve got a big issue with newspaper publishers at the moment because we’re looking for more transparency in their circulation figure.”

Another leading national advertising agency figure said there was “zero awareness” in the industry of the amount of newspapers being dumped at universities and schools and that the disclosure would mean Fairfax — and News Limited — would “cop it left, right and centre”.

“Advertisers are on different deals but over a 12-month cycle you’re likely to see a significant shakeup in the industry,” the source said.

An advertising executive with strong links to Fairfax said that although the company prefers to rely on Roy Morgan readership data, they’d now be asking the ABC to “open the process up”.

“It’s more the principle, the fact that there’s a loophole, that enables it to happen,” they said. “In terms of the quality of the medium, and its robustness, that’s obviously a concern.

“Our buyers are going to hammer them with that, they’re going to use it as a lever to beat them over the head. Because those students are getting the paper for next to nothing those readers are not necessarily as valuable as they would seem.”

The email says if the ABC was alerted it would be forced to alter its definition. Fairfax currently has four representatives on the ABC’s general decision-making committee:

“If the ABC definitions became exposed in this regard then it is likely that the ABC would come under pressure to further revise these rules and definitions to ensure that all education-related copies are released in full exposure.”

ABC chief executive officer Paul Dovas told Crikey advertisers were consulted on the current method of classifying educational sales and the system “recognises subscriptions being set up in a certain way”. Prior to 2006 education sales didn’t appear in the official data at all.

The Fairfax email was a response to a hypothetical scenario whereby The Age‘s Monday education lift-out would be separated from the main paper to give it greater reach among students and teachers. But in doing so, Fairfax would have to admit to advertisers how many copies were reaching their target market. The email was forwarded to a Fairfax working group in Sydney for consideration and then widely distributed.

A  large proportion of the ‘education copies’ — perhaps up to half — are never read, according to industry insiders. They are either returned to Fairfax, left outside the doors of student unions or piled up in high school staff rooms. Many of the scheme’s readers fall far outside the AB demographic courted by advertisers.

Grant Mills, a bookshop assistant at Monash University’s Clayton campus, told Crikey that around 3,000 copies of The Age are delivered daily. While they sometimes sell out in peak periods, in quieter weeks between 1,000 and 1,500 are returned each day. At the University of Melbourne Student Union, which receives about the same daily amount, unsold papers are often left outside the union after 4pm (the picture below shows copies of The Age piling up at the union). The remaining copies are distributed at 33 other university campuses and four metropolitan newsagencies. 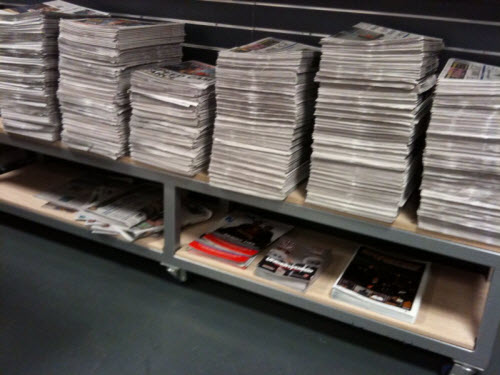 News Limited’s the Herald Sun and The Australian also maintain similar schemes but, as acknowledged in the email, do not rely to the same extent on advertisers for their revenue.

The deals are also popular with newsagents, who are able to claim a commission from The Age at a rate that far exceeds the annual subscription amount.

An Age spokesperson claimed the documents had been provided to Crikey “illegally”.

In an emailed statement, the spokesperson did not address the issue of the circulation discrepancies raised in the 2007 email directly but said: “I have full confidence in the integrity of The Age‘s subscription practices. At all times, The Age‘s procedures adhere to the rules set down by the Audit Bureau of Circulations. These are open, transparent and independently audited.”