Crikey has always been a keen watcher of TV presenters in satin, so its a joy to see Kylie Gillies keeping the flame alight. Plus, other media news of the day. 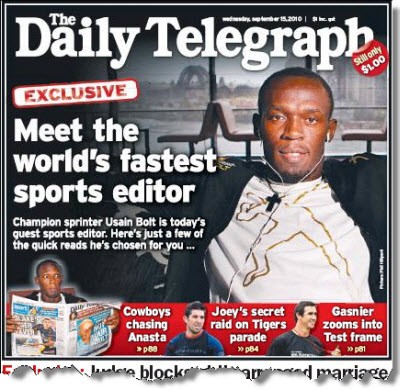 Complete with breakout boxes, Bolt gave his inner most thoughts on each Tele story as he saw it:

What an interesting concept! The first lady of American television Oprah Winfrey is coming to Australia in December. Is there any chance that Rupert Murdoch’s minions could line her up for a guest sports editors spot, for Melbourne’s Herald Sun for example? What would it look like? Head over to Crikey Sports to see our take on what today’s edition of the Herald Sun would like if Oprah Winfrey was guest Sports Editor. — Leigh Josey

Satin Watch. Crikey has always been a keen watcher of TV presenters in satin, so its a joy to see Kylie Gillies keeping the flame alight this morning with a lovely canary yellow number:

So, who leaked to the Tiser?

“A sophisticated electronic witchhunt is underway in the top levels of the public service to find who leaked details of the Government’s razor gang proposed Budget cuts to AdelaideNow.” — AdelaideNow

“Almost 25 years after it ended, gritty drama Prisoner is being remade into a new series set in a detention centre. Ten, which was home to the original show featuring Maggie Kirkpatrick as Joan ‘The Freak’ Ferguson, Val Lehman as Bea Smith and Fiona Spence as Vera ‘Vinegar T-ts’ Bennett, is re-imagining the jail drama under the new name Inside Out.” — News.com.au

“Struggling right-wing broadcaster MTR has shed a quarter of its average audience and has again claimed the title of Melbourne’s lowest-ratings station. MTR now has an average of just 6000 listeners — down from 8000 — and attracts only 1.1 per cent of the available audience.” — The Age

“The News of the World could be facing tens of millions of pounds worth of damages and legal fees from the growing barrage of privacy litigation being brought by individual victims of phone hacking.” — The Guardian

“Twitter has announced that it’s rolling out a new version of its web interface. News of the company’s plan to integrate multimedia into the stream leaked out earlier this afternoon, but we’ve now learned that the redesign goes much further than that, with an interface that resembles that of a far more sophisticated web app (and Twitter’s recently released iPad app).” — Mashable

Disney boss to save failing Tribune?