Are these the six key figures for this term of parliament?

An interesting top seven for the first week of the Second Gillard Government...

An interesting top seven for the first week of the Second Gillard Government, the present and past Labor leaders, the present and past Liberal leaders and the two independents that have ended up queen makers. Are these the six key figures for this term of parliament? Well perhaps the first nine months, but the man in 18th place will have something to say about influence after that…

Stephen Smith manfully “agrees” to step aside from Foreign Affairs, as if he had any choice while Jullie Bishop is going exactly nowhere thank you very much … although if the Liberals would like to check both their House and Senate vote in Victoria, the need for a small l from the Garden State to take a very prominent role looks well overdue … Member for Goldstein doesn’t really fit that description of course.

Peter Garrett and Penny Wong both received promotions, which has been viewed askance by some of the media, particularly those seen to be close to the former PM, while Bill Shorten’s rapid rise has also raised eyebrows, though perhaps not as much as Feeney and Farrell’s. 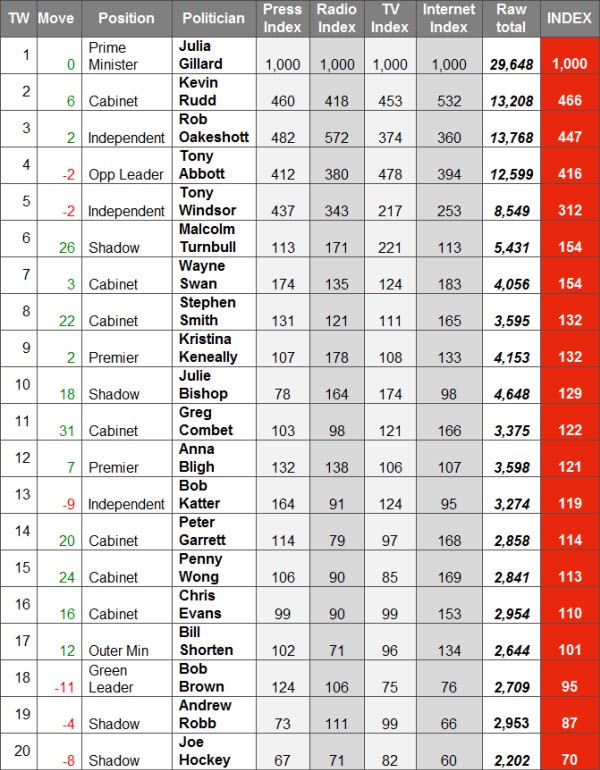 The two independents that went with Labor are…erm…”popular” on talkback this week.

You know I would never be the Christmas Grinch, but given the continuing state of the American economy, wouldn’t it make more sense getting Jackie Chan to visit than Oprah?

I agree about Jackie Chan, or at least I am an admirer. I get your point but he is a big sino-patriot. Anyway Jackie Chan used to visit all the time–because his parents immigrated here (with Jackie but he moved back to train with Peking Opera early on, not sure if he ever had Australian nationality), but unfortunately they are both deceased now. Both are in the Gungahlin Cemetery in Canberra.
Just checked wiki, interesting:

“(after early film failures in HK….) Chan joined his parents in Canberra in 1976, where he briefly attended Dickson College and worked as a construction worker.[14] A fellow builder named Jack took Chan under his wing, earning Chan the nickname of “Little Jack” which was later shortened to “Jackie” and the name Jackie Chan stuck with him ever since.

He speaks Cantonese, Mandarin, and English fluently, and also speaks some German, Korean and Japanese, as well as a little Spanish”