Rudd doing what he should

The new Foreign Minister Kevin Rudd is doing what he should be doing. Going off to the United Nations.

Gillard caught on the hop. Most would be prime ministers, even when they are not confident of winning the office, spare a thought or two about what sort of government they would like to run. They might not admit it when in campaign mode but somewhere behind the scenes a leader will have a trusted ally working out a new administrative arrangements order to reshuffle ministries and departments to suit their prejudices. Sometimes it will be a parliamentary colleague — Gareth Evans I remember used to love the task — and sometimes a staff member. And when the campaigning is over the plans are ready for the prime ministerial stamp of approval after a little fine tuning.

Not so in the case of Julia Gillard it would appear. Her re-arrangements of the order of government have been anything but smooth, with changes still being made days after the announcement of a new ministry. Some of the elementary mistakes like ignoring women’s affairs in the initial statement, neglecting to mention tertiary education after destroying an education department and neglecting indigenous health which is supposed to be a high priority area smack of very poor staff work indeed.

Hopefully the prime minister will now realise that the complexities of running a country need a different kind of staff than those of a successful deputy prime minister.

NGOs on the Afghan war. “Defence chief hails progress in Afghan campaign”, declared the ABC News yesterday, as it reported that Australian Air Chief Marshal Angus Houston, head of the nation’s defence forces, believes progress is being made as the campaign in Afghanistan reaches a crucial point. “Over recent months we have also blunted the insurgency, taking back areas long held by the Taliban and putting sustained pressure on their leadership through high-tempo special forces operations,” he said. “Now we have the right strategy and associated resources for the first time since 2001.”

Given that since June 1,  10 Australian soldiers have died while serving in Afghanistan — nearly half the number of Australians killed there since military operations began in 2001 — it was quite an optimistic assessment even if his comments implied a serious criticism of what had been going on for the previous nine years. “The momentum is shifting our way. We remain committed and our efforts are respected and appreciated by the people of Uruzgan and our coalition partners,” he said.

Independent assessments of Australia’s involvement in Afghanistan are hard to find and this is certainly not a war being covered in any detail by the Australian media. Full-time war correspondents are absent and so the reporting of statements by the likes of Air Chief Marshal Houston go largely unchallenged. So in the interests of balance, I thought the views of the Afghanistan NGO Safety Office, an independent project to inform and advise humanitarian organisations on safety conditions across Afghanistan.

In its latest report at the end of August, the safety office recorded that in Uruzgan province where Australian troops are stationed, the overall level of incidents remained about the same as in previous reporting periods. One new trend was a marked increase in the use of rockets by armed opposition groups (AOG). Yet, as graphs from recent reports show, there has certainly been no decline in activity this year compared with last. 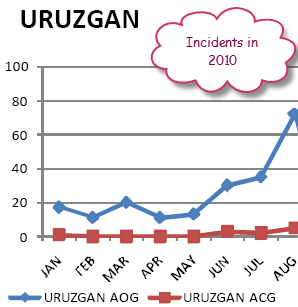 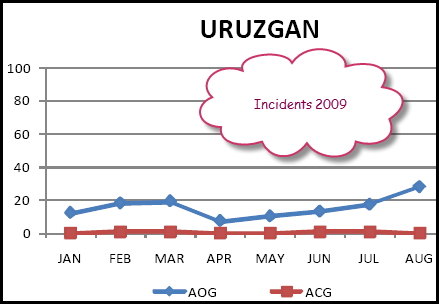 There is an interesting comparison between Air Vice Marshall Houston’s comment that Australian special forces were involved in the push to secure districts around Kandahar and Helmand, where operations had seen the Taliban lose its senior leadership, and the ANSO report comment on Helmand province that “putting to shame those who have over the last weeks claimed ‘progress was being made’, Helmand province witnessed an enormous, and increasing, amount of AOG activity mostly in the form of direct attacks.”

The best place for him. The new Foreign Minister Kevin Rudd is doing what he should be doing. Going off to the United Nations. As a new Prime Minister tries to settle in to her job, the last thing she needs sitting around the Cabinet table is her predecessor.

If it wasn’t so serious, you would laugh. What the United States does is so important to Australia that we just have to be interested in its politics whether we like it or not. And at the moment there is plenty for us to be worried about with the consensus view being that the maddies are increasingly likely to gain control in Washington.

Here is the latest example of Newt Gingrich, again making a comeback to political power and a potential Republican presidential candidate, talking about President Barack Obama in an interview with the National Review:

“What if [Obama] is so outside our comprehension, that only if you understand Kenyan, anti-colonial behavior, can you begin to piece together [his actions]?” Gingrich asks. “That is the most accurate, predictive model for his behavior.

“This is a person who is fundamentally out of touch with how the world works, who happened to have played a wonderful con, as a result of which he is now President.”

It is not just the mainstream media that is asleep on Afghanistan but alternative media such as Crikey have not given this war the attention that it deserves.
There is a constant barrage of misinformation such as last night’s SBS world news that reported that reports of British soldiers using British military aircraft to send heroin out of the country was being investigated and then added that heroin was how the Taliban financed its “insurgency”. They presumably didn’t mean to imply that the British were selling/distributing the heroin on the Taliban’s behalf. The fact that according to several authoratative reports the Taliban recieves no more than 4% of heroin sourced income didn’t rate a mention. Nor the fact that the other 96% goes to finance CIA operations, sundry warlords allied to the “coalition”, members of the Karzai family etc.
Houston’s bizarre analysis has not been challenged by any member of parliament. The fact that it has taken 9 years to get the government to even agree to a parliamentary debate on Afghanistan is surely worth at least some comment from Crikey and other alternatives to the mainstream.
Isn’t an illegal war based on the huge lies of the official 9/11 story, tens of thousands killed, millions displaced, worth at least some comment and analysis?

If It Wasn’t So Serious You’d Laugh: it’s simply too hard for Australians to give any credibility to someone who goes by the name Newt.

Oh Dear! I had put Newt out of my mind.