Of rats, dogs and saints

Every Labor MHR has power now. Choosing a ministry when every member of your team has the potential to bring down your government is no easy matter. Put one nose badly out of joint by not offering a job, or in some cases not offering the right job, and the majority can disappear in one […]

Every Labor MHR has power now. Choosing a ministry when every member of your team has the potential to bring down your government is no easy matter. Put one nose badly out of joint by not offering a job, or in some cases not offering the right job, and the majority can disappear in one disgruntled flash. So far it seems that Julia Gillard has managed the task well enough with no signs yet of discontent within the Caucus. But keep watching. It is every bit as likely that a rat will emerge in the Labor Caucus ranks as an Independent will change his mind.

Ministers’ loyal guard dogs. A quote for the day from the diary of a civil servant in Sunday’s Observer in the UK to appropriately welcome a new ministry and its spinners:

“Special advisers are like dogs. Loyal and servile to their cabinet minister masters. If their master is sacked or resigns, advisers follow them into the wilderness. One moment they are sitting in a great office of state, lording it over thousands of civil servants. The next, they walk off in an instant and disappear. It’s a precarious life chasing triumph but facing disaster, marching on the edge of a precipice.

In turn, ministers choose their advisers as they would a dog. To protect them, but also to provide something they lack — to do things they can’t or won’t do. A nice, quiet minister may choose an attack dog. A nasty minister may choose a wiser, more affable dog. For the relationship to work, they have to complement each other. Over time they grow together until an adviser can anticipate his master’s wishes, words and intentions. It becomes second nature. Like dogs and their masters, they even start to resemble each other, to talk and act in the same way. This can lead to warped judgement, unconditional loyalty and, on occasion, strange, inappropriate behaviour.”

The message from Basel. As Saint Augustine was reputed to have said, “Give me chastity and continence, but not yet”. The world’s financial regulators agreed on measures at the weekend designed to prevent banks from running out of liquidity as they did during the global financial crisis  in the autumn of 2008. The finer points of what is known as Basel III are a bit arcane for mere non-banking mortals but basically the new rules dictate that banks hold 4.5% of common equity and retained earnings up from the current minimum for this core Tier 1 capital of 2%. The London Daily Telegraph reports that the new arrangements also insist on a “buffer” of 2.5% to be built up in good times, taking the total capital required to 7%. Banks can dip into the buffer in times of hardship, but if so, they must restrict dividend payments.

Jean-Claude Trichet, President of the European Central Bank and chair of the committee, called the agreement “a fundamental strengthening of global capital standards”. And well it might be but not in a hurry. Basel III is to be phased in between 2015 and 2018 so we should all hope that there is not another outbreak of financial crisis before then.

European banking: not telling the whole truth. The examples keep coming of how governments try to hide unpleasant truths from the general public about the safety of banks. The latest evidence is a research report by officers of the Organisation for Economic Co-operation and Development. Hidden behind the title OECD Working Papers on Finance, Insurance and Private Pensions, No. 4 — The EU Stress Test and Sovereign Debt Exposures , and couched in very bureaucratic language, is a rather frightening proof of the extent of official deception.

Less than two months ago the Committee of European Banking Supervisors (CEBS), a body set up to give advice to the European Commission on policy and regulatory issues related to banking supervision, produced the findings of what it call stress testing of European banks. The aim of the report was to reassure investors and bank customers that there was no reason to fear that the financial troubles of Greece and other countries would spread to Europe’s banking system. Reassure it did. Only seven out of the 91 banks tested, it found, would need to raise added capital in the event of a modest double-dip recession and a sharp drop in the value of Greek, Irish, Portuguese, Spanish and Italian government bonds.

Not quite so simple, suggests the OECD study. Central to the CEBS study was the assumption that only what banks classify as their trading books needed to be looked at in assessing what would happen if things went bad. Bonds held in what the banks call their banking books were treated as if they would be worth their full face value amount when held to maturity. 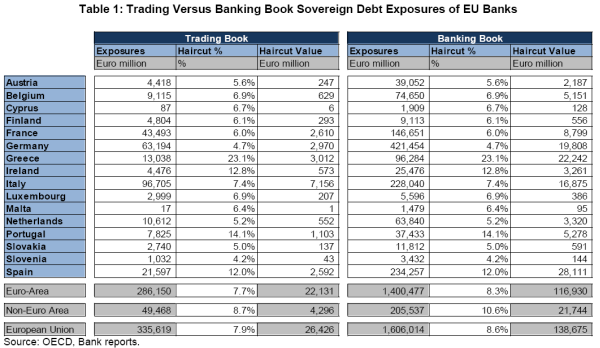 The OECD report put it this way:

The EU-wide stress test did not include haircuts for sovereign debt held in the banking books of banks on the grounds that over the 2 years considered default is virtually impossible in the presence of the EFSF, [a European Financial Stability Facility set up by EU countries to provide €440 billion in euro area guaranteed bonds to lend to governments facing financing difficulties] which is certainly large enough to meet funding needs of the main countries of concern over that period.

The haircuts applied to the trading book in the stress test are shown in the first block of Table 1. The trading book exposures (not reported in the stress test paper) are also shown. The EU wide loss from the haircut is around €26.4 billion. The contribution of the 5 countries where most of the market focus has been (Greece, Portugal, Ireland, Italy and Spain) is only €14.4 billion.

A different picture emerges when we consider the banking book. First, it is important to note that the EU banking book sovereign exposures are very much larger than those of the trading book — around 83% of the total. If the same haircuts are applied to these exposures the loss amounts to €139 billion, or 12% of the Tier 1 capital of the EU banks at the end of 2009 (and €165 billion and over 14% of Tier 1 if trading book losses are added in). The haircuts of the 5 countries of market focus amount to €75.8 billion in the banking book, and €90.2 billion if the trading book amount is added in. This is around 8% of EU Tier 1 capital of stress tested banks.

The OECD analysis finds that the data raise a number of issues worth discussing in the context of the stress test and market concerns. Equity markets continue to perform poorly, bond spreads remain elevated, and banks remain reluctant to lend. “The encouraging stress test results seem on the face of it to be at odds with these developments,” it says. “This difference is due in part to the assumptions of no bank failures and no sovereign default implicit in the stress test.”

The less than reassuring final conclusion is this:

“This study has shown that most of the sovereign debt is held on the banking books of banks, whereas the EU stress test only considered their small trading book exposures. Sovereign debt held in the banking book cannot be ignored however. First, individual bank failures would see latent losses on the trading book realised, a fact that creditors and equity investors need to take into account. Second, and more importantly, the market is not prepared to give a zero probability to debt restructurings beyond the period of the stress test and/or the period after which the role of the EFSF SPV comes to an end. The main reasons for this are: the very large job ahead for fiscal consolidation in a period of weak economic growth; and the apparent difficulty of achieving structural/competitiveness reforms in some countries in a short period of time. The paper also showed that excessively exposed banks in principle can reduce their exposure by not re-financing maturing sovereign debt, with the government funding gap being met instead by the SPV. This would have the effect of transferring sovereign risk from the bank concerned to the public sector.”

Selling global warming but will it sell cars? Japanese car company Nissan is certainly spreading the message that global warming is having an effect on the world. Whether its Nissan Leaf advertisement, which debuted during the opening game of the National Football League season last week, will also sell cars is another matter. 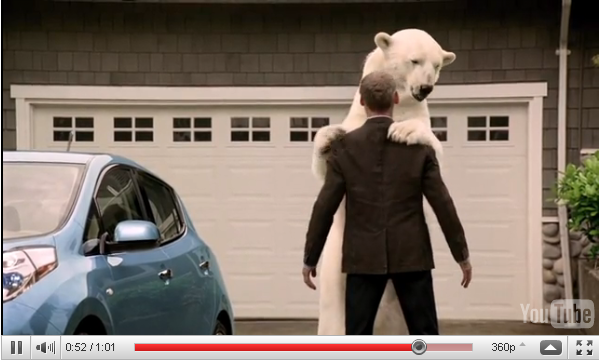 Prize for best caption of what the bear is saying.