Byrne’s good, but Sully rules Ten. With Ten launching its new 2.5 hour evening news lineup soon, speculation is mounting as to who will take the anchor role in their 6-6:30pm national news bulletin. During this week’s Mediaweek podcast, there had been some speculation from Sunday Telegraph media journo Richard Clune regarding the host role. During the […]

Byrne’s good, but Sully rules Ten. With Ten launching its new 2.5 hour evening news lineup soon, speculation is mounting as to who will take the anchor role in their 6-6:30pm national news bulletin. During this week’s Mediaweek podcast, there had been some speculation from Sunday Telegraph media journo Richard Clune regarding the host role. During the brief chat on the subject, Clune says that he hasn’t ruled out the rumour of Jennifer Byrne taking the host role. The Byrne rumour has been floating around for several months now, however previous talk had centered on Byrne hosting a possible national current affairs program to air at 6:30pm in direct competition with Today Tonight and A Current Affair.

Would Byrne work as the host of the 6pm news? While nobody can dispute that Byrne is a talent that could handle the role, it perhaps isn’t a role that would be best served by her taking it on. Byrne is a very strong presenter and reporter, but as an anchor of a news bulletin she would be taking on a role that would limit her from exhibiting the breadth of talent that she possesses. Further to that, is there a need to bus in a news presenter from outside the network when Ten already have a number of talented on-air presenters who are already strongly associated with the Ten brand?

Surely the obvious answer to the 6pm national news bulletin would be to finally give Sandra Sully the chance to take on such a role. Sully has been Ten’s biggest name in news for the past decade and does a great job hosting their late night bulletin. It makes sense for her to graduate to the network’s highest profile news role. One would also assume that the 6pm Ten bulletin would be a solo anchor, providing a further point of difference to the competing bulletins. While it would be a shame to see an end to the dynamic on-air relationship with sports presenter Brad McEwan (the 6pm bulletin is reportedly sports-free), Sully is the obvious candidate to take on this new role. — Dan Barrett of Crikey TV blog White Noise

Media steps in it on bra story. The morning papers blared “PM’s ‘stepdaughter’ poses in bra”. I like the single quote markets around the word ‘stepdaughter’. She’s nothing of the sort; she’s not related by marriage because Gillard and her partner are not married. Very misleading of Fairfax.

Over at the News.com.au there’s no qualms about even the qualifying quote marks around the world step-daughter: “Julia Gillard’s step-daughter Staci Child strips for magazine shoot,” its story said. In the copy she was described as “de facto step-daughter”. So is that the step-daughter you have when you are not married, or is that the one in all but name only? The woman, Staci Child, posed in a bikini in Australian flag colours, and carried the Australian flag as well. The story spoke to the usual suspects among the conservatives, the rent-a-quotes, the RSL and David Flint for their naturally reserved reaction to the use of the flag. Why not the Republican movement? — Glenn Dyer

Congratulations! You’ve won a prize! Has someone hacked The Australian‘s website or is Rupert so hard up for cash that he’s taking spam advertising on his premier online news site? 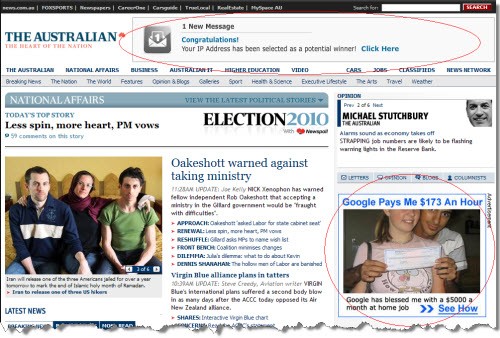 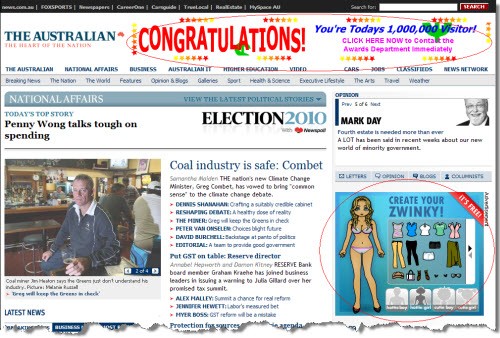 “A funny thing happened on the way to the funeral: People are spending more time following the news, rather than giving in to other distractions.” — Washington Post

Phone tapping, and that’s not all

Why good journalism will live on-line

“…it would be a mistake to write off the web as a medium for serious, long-form journalism. There’s a vast quantity of high-quality narrative journalism on it.” — The Observer

“As an acronym of General Entertainment and Movies, GEM will feature shows such as Weeds, The Secret Millionaire, Random Acts of Kindness, The Big C starring Laura Linney and Wife Swap.” — TV Tonight

On digital, Ramsey Street is heating up

“Long-running Neighbours is set for some sexing-up next year thanks to another regulatory anomaly in digital multi-channelling regulation.” — The Australian

BBC and News Corp kicking up a Stig

“Usually the BBC and News Corp., which controls the Sky pay-television service and some of the biggest newspapers in Britain, clash over matters like broadcasting regulations. Now they are battling over a racecar driver, one who recently decided to take a turn as a writer.” — New York Times

Roger Ebert returns to TV — in a different voice

“Roger Ebert hasn’t let the loss of his voice keep him from speaking: The wildly popular film critic has given two thumbs up to a revival of his long-time movie review show.” — People