Why the Labor re-election effort was so bad

Relying on reports of focus groups to determine policy priorities by the Rudd Government and Gillard continuing to take the same advice simply led to the precipice of defeat.

Let’s hope she means it. Less spin and more heart is how The Australian headline writer summarised Julia Gillard’s address to her first post-election Caucus meeting.

We can only hope she means it for the drubbing Labor got at the polls was an amazing achievement. Relying on reports of focus groups to determine policy priorities by the Rudd Government and Gillard continuing to take the same advice simply led to the precipice of defeat.

If you missed it on Wednesday night, take advantage of the ABC’s replay service to catch the interview with Labor’s former pollster Rod Cameron on Lateline. It provides wonderful insight by a true campaign professional into why the Labor re-election effort was so bad. 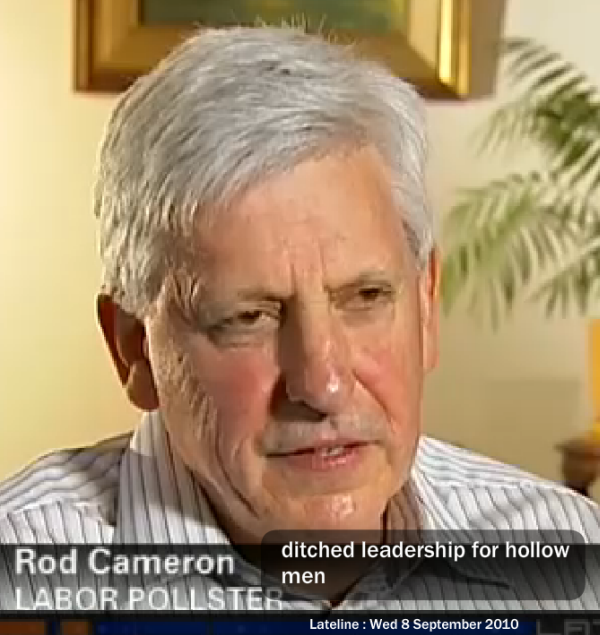 Believe me, the man is not just blowing his own trumpet. Through much of the 1980s I was on the receiving end of the advice he and his partner Margaret Gibbs gave to Labor’s campaigns and not once did I ever hear him suggest that a policy should be abandoned or even changed.

Putting it harshly, Rudd and Gillard got things the wrong way around.

Chinese diplomacy and memories of George Brown. In all my years drinking toasts with maotai in China — I used to visit the country frequently in a former life buying tea — my hosts never once got to the drunken shouting stage. I was thus surprised to read how China’s top-ranking UN diplomat recently embarked on a drunken rant against the UN Secretary General Ban Ki-moon, telling his boss he’d “never liked” him, and adding for good measure that he didn’t like Americans either.

The incident just didn’t fit with my impression of the character of a Chinese government official but the reminiscence from a London Daily Telegraph editorial about George Brown, the Foreign Minister in Harold Wilson’s Labor Government that the Chinese behaviour prompted did ring true:

“These days, former British prime ministers regard half a bottle of wine at dinner as shocking. It was not always thus. Churchill managed to conceal his thirst from the public; not so poor George Brown, who as Harold Wilson’s foreign secretary made it a point of honour never to draw a sober breath.

“At a reception for a South American republic, Brown is reputed to have staggered up to a glamorous figure in red silk and asked for a dance. “I must refuse for three reasons,” came the reply. “First, this is not a dance but the national anthem. Second, you are clearly drunk. And third, I am the Cardinal Archbishop of Lima.”

Stimulate or cut the deficit. The current political debate in the United States, and a lesser degree in Europe and to a still smaller extent in Australia, about whether the proper course of economic policy is to stimulate the economy or worry about reducing government debt fascinates me. I see it as the big political issue of the day.

My inclination is to side with with those who worry less about the future than the now and therefore and I tend to come down on the side of those advocating governments and central banks should be doing whatever can be done to reduce the suffering that unemployment rates of 10% or more naturally bring.

The New York Times columnist and Nobel prize winning economist Paul Krugman relentlessly puts this Keynesian case in both his weekly column for the paper and his daily web postings and deserves to be on the must read link list of anyone seriously interested in politics.

I’m probably not doing Professor Krugman justice but to me he argues well that fixing today’s unemployment problem is the first task and that fixing the increased government deficit that is necessary to fix unemployment is a problem for a few years down the track.

That all seems well and good but for the terrible fear that the politicians who make spending decisions are not as rational as he is and that their capacity to spend (or in the case of Republicans to reduce taxes as a so-called stimulatory measure) always outweighs their ability to approve spending cuts or tax increases.

Refudiate this if you can. Our wonderful living English language!

How America shares the wealth. The Economic Policy Institute, yet another of those Washington think-tanks but this time with a substantial financial contribution from the trade union movement, has recently published a revealing analysis of how modern day America shares its wealth.

According to the Congressional Budget Office, between 1979 and the start of the current recession in 2007, the pre-tax incomes of the upper 1% grew 214%, while the incomes of the middle-fifth and lowest-fifth grew, respectively, 25% and 4%. As the Chart shows, this extremely unbalanced growth implies that 38.7% of all of the income growth accrued to the upper 1% over the 1979-2007 period: a greater share than the 36.3% share received by the entire bottom 90% of the population. 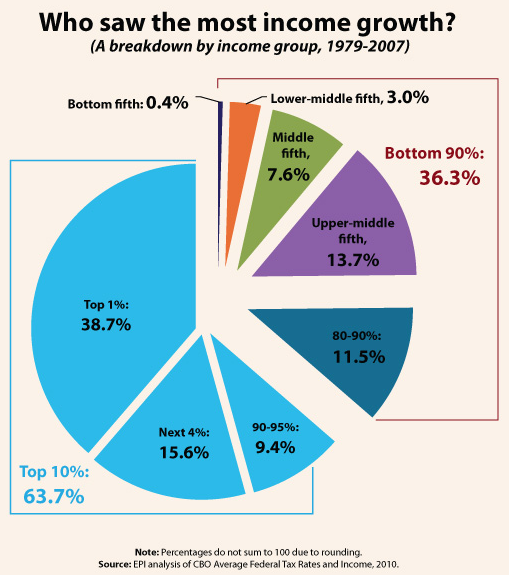 The Institute found that those in the top 10% of the income scale received 63.7% of all the income growth generated over the 1979-2007 period. In contrast, the bottom 20% of all earners saw such a small share of income growth — just 0.4% — that it barely shows up on the included pie chart. 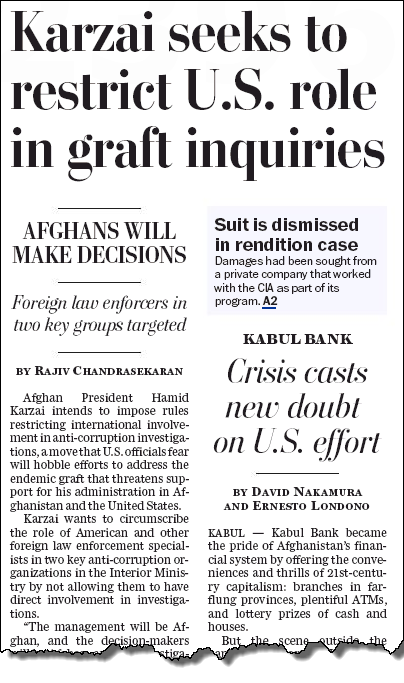 For the memories of George Brown story.
A gold koala stamp with crossed gum-leaves. 😀

Thanx for the column.

I remember George Brown well. He was informally dubbed Lord Thrombosis because he was such a bloody clot!

Re Chinese ambassador: Wasn’t this guy was it? http://blogcritics.org/politics/article/china-to-us-shut-up-about/

that maotai’s vile stuff Richard. I only turn to it after the vanilla essence is gone. It’s like trying to swallow distilled Glenn Milne