Does anyone at the Courier-Mail vet these tweets, and if they did, could we ask them to explain how Robyn's tweet edified the profession? Plus, new Google search and other media news from around the globe.

Courier-Mail twits. Have a look at Robyn Ironside’s Twitter effort, on the left below: 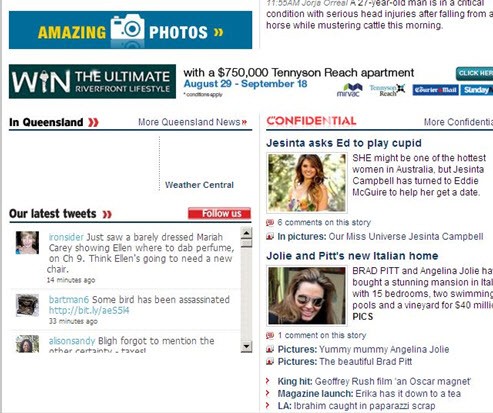 For some time I have been bemused to watch media pros struggling with their newfound twitter freedoms. Sometimes the reader is not sure if they are reading the professional filtering efforts of journalists (where tweets provide great additional atmosphere and information and timeliness) or personal observations best kept to themselves, such as this one.

Was Robyn on duty, and therefore paid by people like me (shareholders in News) to make this sort of snide sexist comment at (widely known lesbian) Ellen’s s-xual pleasure at having a barely-dressed Mariah Carey on the couch?

What gate-keeping is there? Does anyone at the Courier-Mail vet these tweets, and if they did, could we ask them to explain how Robyn’s tweet edified the profession? — Terry Towelling

Stupid White Bloggers. Filmmaker Michael Moore has announced a new blog, OpenMike, because of his concern about the swing to the right in the US. It began on Monday when he attacked President Obama’s White House chief of staff, Rahm Emanuel who is reported to have expressed interest in becoming mayor of Chicago. Emanuel apparently provoked Moore’s outrage by allegedly cursing the United Auto Workers (UAW). Moore issued a warning about his own use of language in the first edition of OpenMike, instructing youngsters to seek the permission of Mom and Dad before beaming it up. — Ava Hubble

Google finally found what you were looking for

“Google rolled out the most significant change to its search page since the advent of search ads on Wednesday with what it calls ‘Google Instant.’ Rather than requiring searchers to hit ‘enter,’ results pop up — along with corresponding search ads — as you type a Google attempts to predict queries from the very first character.” — Advertising Age

“Twitter has Bieber fever. A designer named Dustin Curtis chatted with an employee at the social media networking site and Twittered Monday: ‘At any moment, Justin Bieber uses 3% of our infrastructure. Racks of servers are dedicated to him.'” — The Hollywood Reporter

“Grant Denyer has been announced as host of Seven’s version of Iron Chef Australia, currently filming in Melbourne.” — TV Tonight

“As Stephanie Rice begins the image-rebuilding process following a week of controversy, Channel 7 has confirmed it last month opted not to renew their big-budget two-year partnership with the swimmer.” — Daily Telegraph

The danger of being a journalist

“Riyad Assariyeh, a 35-year-old journalist working for state-run Al Iraqiya TV, was shot dead by unidentified gunmen as he was leaving his home in Baghdad this morning. This clearly targeted murder brings to 15 the number of Al Iraqiya journalists who have been killed since Saddam Hussein’s removal.” — Reporters Without Borders

Money and power at the paper

“Fairfax is to embark on a promotional drive to advertisers, claiming the paper delivers more affluent, financially secure readers than The Sunday Telegraph.” — AdNews

What would you ask Bill Clinton?

“Monday, September 20, Bill Clinton will be taking part in an exclusive YouTube interview, straight from the Clinton Global Initiative’s 2010 Annual Meeting in New York. Heads of State, CEOs, non-profit and religious leaders and other philanthropists will come together in New York City for the annual meeting, to take action on some of the most pressing challenges that our world is currently facing. Clinton and YouTube want to give you the chance to take part in the discussion.” – Social Times

I find it amazing that a silly tweet where a yong person uses an offensive word is punished so much compared to onging statements from other sporting media stars. What’s the difference – one’s a woman and the other’s a man. We all love you stephanie until you upset the blokes.