Gillard thanked us for being fair and balanced: The Oz editor

Crikey contacted Mitchell for a response to the Australian Financial Review‘s Laura Tingle who, in her column today, wrote of The Australian‘s “anti-government position” and “ferocious and apparently continuing campaign” against the government’s legitimacy.

Mitchell told Crikey Tingle was the biased one during the campaign, dismissing her as a “Ruddite”. But Tingle says even journalists from within the News Limited bunker have congratulated her for the stance.

The Australian — a “centre-right” paper as Mitchell once branded it — backed Tony Abbott‘s campaign pre-election and has run a fervent line in many sections against what editor-at-large Paul Kelly called Labor’s “rainbow alliance”. 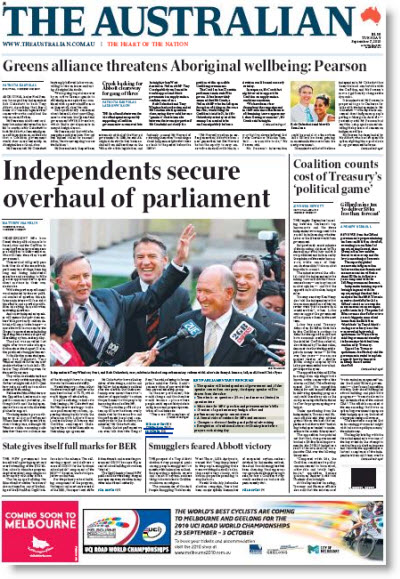 As Tingle recites, Greens leader Bob Brown was angered by the coverage: “[The paper] sees itself as a determinant of democracy in Australia. It believes it has replaced the people and it’s time to bell the cat. It’s stepped out of the role of the fourth estate to think it’s the determinant of who has seats in the parliament, and it needs to be taken on.”

In response, The Australian delivered an extraordinary spray via its editorial yesterday:

“We believe tax reform equals lower taxes, but we are not sure Labor agrees now that it has to answer to high-taxing Greens and rent-seeking regional independents. Greens leader Bob Brown has accused The Australian of trying to wreck the alliance between the Greens and Labor. We wear Senator Brown’s criticism with pride. We believe he and his Green colleagues are hypocrites; that they are bad for the nation; and that they should be destroyed at the ballot box. The Greens voted against Mr Rudd’s emissions trading scheme because they wanted a tougher regime, then used the lack of action on climate change to damage Labor at the election. Their flakey economics should have no place in the national debate. We are particularly tired of Greens senator Christine Milne arguing that “green jobs need a real green economy to grow in”. What on earth can she mean?”

Crikey asked Mitchell to clarify the paper’s call to arms. He responded via email this morning: “I think the editorial refers to them being destroyed ‘at the ballot box’ at some future election. We did not run an editorial on the Greens. We ran a very long editorial on the Labor Party and the Coalition with a couple of pars about the Greens.”

Further, Mitchell claims Gillard had no issue with its coverage:

“The truth is Julia Gillard rang me twice in the last week of the campaign and both times thanked me for our fair and balanced coverage. Check with her office. She did the same in her final interview with Paul Kelly and Dennis Shanahan.”

Crikey went to Gillard’s office but was told they couldn’t comment on any private conversation.

In her ‘Canberra observed’ column today (locked to subscribers), Tingle highlights a breakdown in the relationship between Mitchell and Kevin Rudd. “As it became clear it [The Australian] would not be put on the drip, Rudd believed, the coverage became more strident,” she writes.

Mitchell told Crikey his relationship with Rudd is “cordial”. “I saw Kevin Rudd several times at Kirribilli House this year in the lead-up to his sacking and have spoken to him, at his call, since he lost the prime ministership,” he said.

“Laura is a Ruddite … I defy you to find one person in the Coalition to describe Laura’s election performance as fair and balanced.”

Tingle laughed when Crikey put the quote to her. She points to a piece she wrote in March exposing the dysfunctional Rudd ‘kitchen cabinet’ — shortlisted for this year’s John Button Prize — as an example of her “dishing it out to both sides”.

“I’d invite anyone to look at my coverage,” she said.

Tingle says many journalists — including some from inside The Australian — have praised her column today. As for whether Gillard’s office has been happy with the coverage from Mitchell’s team: “That’s not what anybody in the government has said to me.”

I cannot believe my eyes…I will have to read this again and return…am utterly dumbfounded, completely………………………….

The most bias reporting will always see itself as “balanced” and everyone else disfunctional.

This astonishing admission by the Australian that they want to see the Greens destroyed is so blatant and arrogant that they really have lost all perspective. How can anyone not admit that this paper is nothing more than propaganda for the conservative side of politics. Honest reporting? Not with the Australian.

There’s another organisation in the News Ltd stable that calls itself “fair and balanced”. And given their track record over in the US, let’s just be thankful The Australian has such a low readership (and no broadcast TV channel).

I really hope Julia didn’t call the Editor of The Australian as you described. You can’t appease these people – they’re rabid. That course leads only to destruction.

The Government has to get fair dinkum about the Murdoch media. They ought to quietly stop running individual job ads in The Australian and instead run one quarter-page ad every Saturdaystating that all APS vacancies can be found online. Let’s see how the national broadsheet likes losing $10 million per year. Then they ought to start publicly calling those rags on their blatant bias and misrepresentation of events – every time and at every opportunity – including in answer to questions in Parliament and MPIs. The Government has got to take News on. Success is not guaranteed if they do but failure is guaranteed if they don’t stand up for themselves.

After reading Jason’s article a second time I am now fully convinced The Australian editor-in-chief Chris Mitchell requires therapy sessions, many of them. He is a sick individual. I will be emailing Ms Gillard to ascertain she did say to Mitchell all that he implies.
If she did I cannot imagine what she is playing at. Good for Bob Brown, get up him Bob you owe the OZ nothing. The only politician in News Ltd debt is the Coalition.
I wonder why this amazing revealation is not being trumpeted all over the media, including their ABC. Probably because it is so laughable it cannot be serious.