In the stinging rebuke, obtained by Crikey, Same says he’s disappointed by Young, a leading barrister unrelated to the late MP, and his “apparent desire to destabilise and undermine the Mick Young Scholarship Trust”.

“You appear to have an anger against the Chairman with such terms that I have never experienced in my almost 70 years of adult activities,” the 90-something Labor patriarch says. “I have always loved and admired the bearer of the name of the Trust and I find your activities hard to fathom. The Trust contains a number of fine people who volunteer their time, expertise and money to support the organisation.”

Rival factions — eerily recalling Mick Young’s activities as ALP national secretary in the 1970s — are at war over a proposal to modernise the Trust over its direction and purpose. Of the nine trustees led by chairman Ray Wilson, seven are aligned to Wilson and Young’s family, with Young and former Austrade executive Greg Dodds on the other side of the ledger. The trust distributes books and uniforms to needy students and has a turnover of around $200,000 a year, sourced from donations and fundraising. 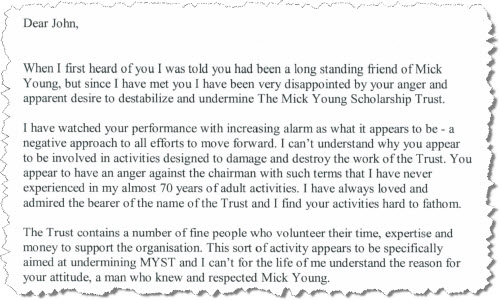 The Trust, which John Young now says is on the verge of financial collapse, is at war over plans to moderise its operations, a move he and fellow dissident Dodds say will shift the balance of power away from the Trustees and towards a power bloc controlled by Mick Young’s wife Mary and daughter Janine. Currently, a unanimous vote is required to alter the organisation’s status and a Supreme Court ruling is needed to overturn the stipulation.

The two factions have been at loggerheads since allegations arose last year that Janine, general manager of the Trust’s day-to-day operations, had been claiming consultancy fees and expenses that detracted from its charitable mission. While a review cleared her of any wrongdoing, questions remained over the proportion of the fund’s revenue spent on wages.

It is understood that threats of an intervention by Swan have sometimes been used as a bargaining chip by members of the Mick Young faction.

John Young slammed his rival trustees when contacted by Crikey: “It’s not a family trust, it’s a public charity.

“I very disturbed that what is supposed to be private correspondence to me is being given to Crikey. I think it can only lead to further damage to the Trust.” He said the organisation was now on its “last legs”.

“This is a dying trust, the level of spending is out of control,” he said. Young said going to the Victorian Supreme Court to spend money on the moderinsation process was “a load of bullsh-t”. Lawyers Norton Rose have already been paid $30,000 in consultancy fees, he said, and it would cost a further $40,000 to get the trust deed changed in the court. “This corporatisation bullsh-t is about  the 20th order of importance,” he said.

“What’s the outcome? What makes a trust like this work is its people and that it captures the person it’s trying to honour. This wasn’t met to be bloody UNICEF. It was a small-time thing to honour a guy we really liked and help a few people out. There’s total delusions about all of this. It’s just cuckoo stuff.”

He strongly suggested his imminent resignation and said the trust would soon fold: “I just don’t believe it’s got a real future which is sad.”

Tim Freedman hit back, telling Crikey early this afternoon that “the last thing said at the meeting last night by John Young was that  board members should not talk to the media”.

“At last night’s meeting Mick Young’s wife moved that John Young be removed as a trustee … it was the view of the majority that John Young’s destabilisation, undermining and obstruction had made it impossible for us to continue our voluntary work to raise money for financially disadvantaged students.”

Freedman said the only reason Norton Rose would cost the trust any money is because Young would not agree to the modernisation of the trust deed, which at present requires unanimity for the simple decisions that a voluntary board requires.

“We are now determined to apply to the Victorian Supreme Court to have the deed modernised,” he said. “We’re going to proceed with that if he continues to oppose what is a very necessary move in the view of seven of the trustees.

“The fact that Saul’s never said anything in 70 years is because of the frustration he’s felt for a long, long-time now.”

What are you, chicken?

Where the elite meet the elite: who’s behind the special fund for special forces?

Can you rewrite the piece to insert ‘Mick’ and “John’ in front of their respective entries due to the shared surname, so that it makes more sense. I assume Mary and Janine Young are Mick Young’s relatives and not John Young’s. It will be a bit repetitive, but that article barely makes sense unless you do this.