Market economists just love to use the boom and gloom words.

Encouraging but hardly boom times. Market economists just love to use the boom and gloom words. They both give them the opportunity to forecast interest rate movements and it is volatility that provides their financial institutions with the opportunity to clip more tickets and transfer funds from clients to annual bonuses.

So it is this morning with the release of Australian Bureau of Statistics figures showing a modest improvement in the number of Australians out of work. “Australian employers added workers in August for the 11th time in 12 months, underscoring the central bank’s view that a jobs boom will help stoke an economic expansion in coming quarters,” reported the financial news service Bloomberg. 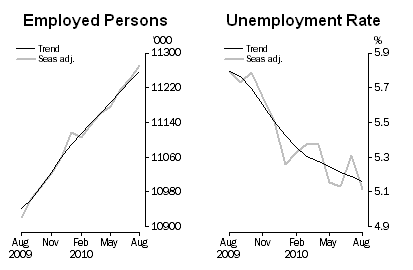 What about me? Lyne MP Rob Oakeshott wasted little time on his return to Port Macquarie to acquaint the Port Macquarie News with the goodies in the bag he brought back from Canberra with him.

But if you thought everyone in Lyne would be happy with the pork, you would be wrong. One of my regular coastal correspondents sent me a copy of an email to Mr Oakeshott yesterday:

“Current Independent Member for Lyne Mr. Oakeshott congratulations on securing a $130 million deal for the electorate of Lyne and in particular the LGA of Port Macquarie ONLY. I note in the above report that NOT one cent will be allocated to either Gloucester or the Greater Taree City Council LGA’s which also fall in to your electorate.

I would welcome your considered, careful and timely response Mr. Oakeshott on why you as the representing MEMBER have failed your ratepayers as I have stated above? Taree Ratepayer.”

From San Quentin to the Kennedy Center. The reformation of country singer Merle Haggard will be complete when he travels to the White House this December to receive the annual Kennedy Center honors.

It will have been a long journey and my favourite Merle Haggard yarn is how one night after he had established himself as a singer he went up to Johnny Cash after a concert and told him, “I certainly enjoyed your show at San Quentin.”

Cash said “Merle, I don’t remember you bein’ in that show.”

Merle Haggard said, “Johnny, I wasn’t in that show, I was in the audience.”

And don’t you dare tell me that Wikipedia has got it wrong. I’m not going to let a little thing like truth get in the way of a good story. Just settle back, sing along and decide for yourself whether his most famous political statement in song was “actually written as an abjectly humorous character portrait.” 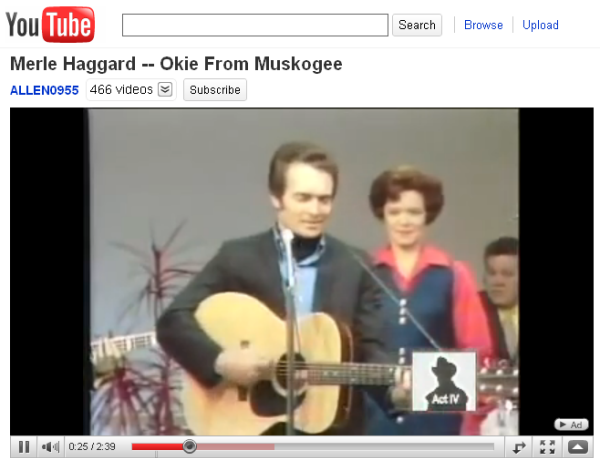 We don’t smoke marijuana in Muskogee;
We don’t take our trips on LSD
We don’t burn our draft cards down on Main Street;
We like livin’ right, and bein’ free.

I’m proud to be an Okie from Muskogee,
A place where even squares can have a ball
We still wave Old Glory down at the courthouse,
And white lightnin’s still the biggest thrill of all

We don’t make a party out of lovin’;
We like holdin’ hands and pitchin’ woo;
We don’t let our hair grow long and shaggy,
Like the hippies out in San Francisco do.

And I’m proud to be an Okie from Muskogee,
A place where even squares can have a ball.
We still wave Old Glory down at the courthouse,
And white lightnin’s still the biggest thrill of all.

Leather boots are still in style for manly footwear;
Beads and Roman sandals won’t be seen.
Football’s still the roughest thing on campus,
And the kids here still respect the college dean.

We still wave Old Glory down at the courthouse,
In Muskogee, Oklahoma, USA.

Good Merle Haggard clip. Another one of his best songs is “Sing Me Back Home”
http://www.youtube.com/watch?v=zN5d4TY-wHM, which is about a prisoner facing execution.