Was Leigh Sales wearing the same jacket (with a touch of satin) as Julia Gillard last night? One of our readers seems to think so. Hard to disagree. Plus, Footy and sex shame beats Gillard and other media news.

Who dropped the f-bomb? It was the talk of Canberra yesterday — not Julia Gillard, but which journalists dropped the f-bomb during the all-important, broadcast-live press conference with Tony Windsor and Rob Oakeshott. Crikey‘s CSI lab has isolated the audio here for your viewing pleasure. So who said it? Leave your suspicions in the comments section…

Trying to be first, on every platform. Brisbane’s Courier Mail won the race to be first yesterday, with star reporter Emma Chalmers’ story on Labor winning independent support beating all other major metros and national dailies, including The Age, the Sydney Morning Herald and the Herald Sun. It was a victory by literally seconds, but to paraphrase a red-head PM, a win is a win is a win.

Crikey spies in both the News and Fairfax bunkers reported that the journalists on duty went so far as to prepare two and even three separate stories to cover all contingencies. (It reminds of the days when the late lamented Saturday afternoon Herald in Melbourne would prepare two team posters to celebrate the grand final win by either one, in order to have them ready for the masses streaming out of the MCG. As a kid I was always in awe at how brilliant the Herald cartoonist Hook was to know the outcome!)

And according to our spies, the palpable impatience of the journos in the Parliament House Committee Room with Rob Oakeshott’s ironically long-winded speech to finally put Australia out of its misery was nothing compared to the online journalists, with fingers, toes, tongues and god-knows-what-else hovering over computers, iPads, iPhones and Twitter accounts. As one wag said, the new generation of journalist will have to be bred with extra digits to handle the multitude of platforms they must now report on. — Brisbane media watcher Terry Towelling

Footy and sex shame beats Gillard. The drama in Canberra captured the nation’s attention yesterday. Not. Here’s the most popular headlines from the News tabloids this morning… 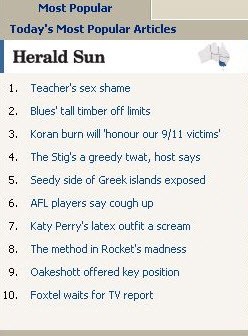 At The Daily Telegraph website, a quick glance reveals nothing of the new political landscape… 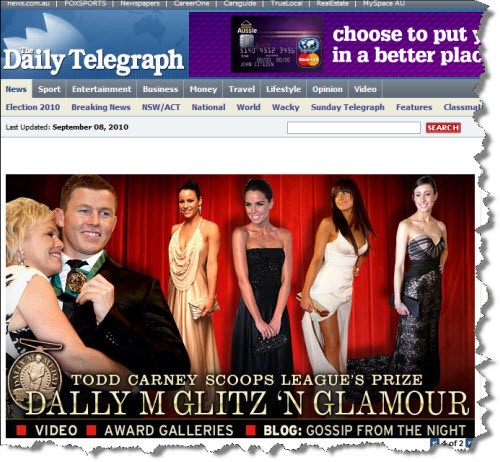 Fashion watch. Was Leigh Sales wearing the same jacket (with a touch of satin) as Julia Gillard last night? One of our readers seems to think so. Hard to disagree. Frivolous? Yep. Funny? A little… 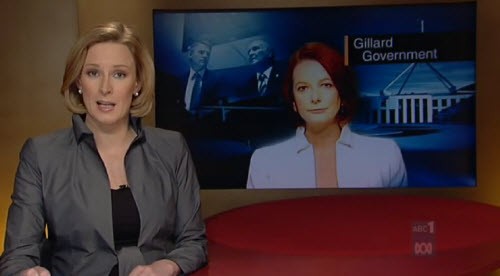 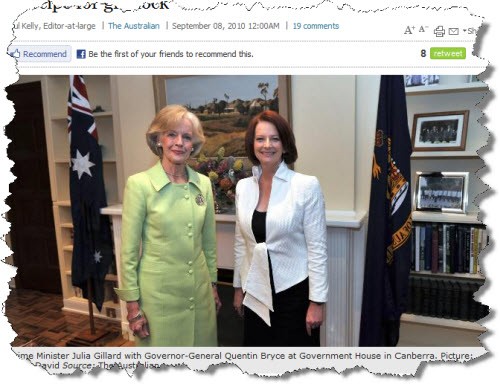 “A key witness from inside the News of The World newsroom says he will testify on the phone-hacking affair, both to police and an inquiry begun by parliament.” — The Guardian

“The latest traffic memo arrives from Gawker Media honcho Nick Denton: in it, Comscore shows that his network of sites is bigger than any newspaper online but the New York Times. That being said? ‘The newspapers are now the least of our competition. The inflated expectations of investors and executives may one day explode the Huffington Post. And Yahoo and AOL are in long-term decline. But they are all increasingly in our business.” — The AWL

Google coming to a TV near you (next year)

“Google Inc will launch its service to bring the Web to TV screens in the United States this autumn and worldwide next year, its chief executive said, as it extends its reach from the desktop to the living room.” — Reuters

The shake-up in US network news

“Execs may issue denials about possible deals such as ABC/Bloomberg or CBS/CNN, but the partnerships seem to have a whiff of inevitability.” — Broadcasting & Cable

“They are unlikely to lay on a private jet to whisk him to the Med, but David Miliband has been given the seal of approval by the Murdoch empire after being invited to dinner next week by the media baron’s son James.” — The Guardian

The Stig unmasked, and then sacked

“Top Gear presenter Jeremy Clarkson has revealed The Stig has been sacked from the show after unmasking himself in a court battle with the BBC.” — Sky News

I thought Fran Kelly did the f-word. She looked kind-of sheepish later.

It’s a nice jacket, I want one. Where’s it from?

The Herald cartoonist was WEG (Bill Green). He’d be rolling around in his grave to know how quickly his name is forgotten, or that his work is assumed to belong to a more contemporary cartoonist!