A year or two of relative legislative inaction will be a consequence of minority government and that might be no bad thing.

One of the problems with politicians is their belief that they need to be doing something to justify their existence when not reacting to every call for action from this or that pressure group would normally be far more sensible.

Judging whether the next three years are to be among the best in the nation’s history will depend on how few laws are changed rather than how many.

A big enough agenda. The tasks before the Gillard Government are big enough already. Transforming the health changes from words to reality will require a major effort in itself. Completing the changes to the public education system likewise.

And then there will be the promise to create a community consensus so the country can deal with climate change. Successfully dealing with those three subjects would be a mighty achievement without worrying about anything else.

Keeping Kevin happy. What Kevin wants Julia should give. The biggest impediment to a stable minority Labor Government would be to have Kevin Rudd unhappier than he need be and seething away inside the Cabinet tent with discontent. And that means giving him the ministerial post of his choice.

If that happens to be Foreign Affairs then so be it but perhaps his part-time United Nations role working on climate change will encourage the former Prime Minister to take that as his domestic responsibility as well.

What minerals exploration crisis? With all the weeping and wailing from the mining industry you would think that the prospect of higher taxation had brought mineral exploration to a halt. What a surprise then to see this morning’s figures on the subject from the Australian Bureau of Statistics. 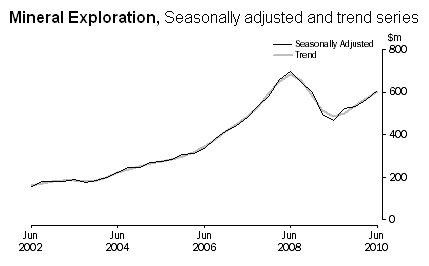 The largest contribution to the rise in the trend estimate this quarter was in Western Australia (up $25.0m or 7.7%) followed by Queensland (up $2.2m or 2.0%). The trend estimate for metres drilled rose 2.1% this quarter. The current quarter estimate is 28.5% higher than the June quarter 2009 estimate. 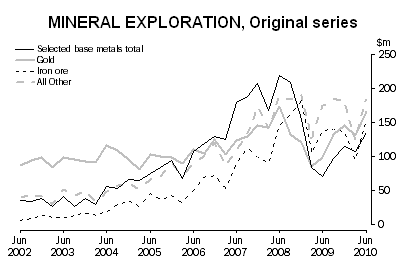 Ice extent remained below the 1979 to 2000 average everywhere except in the East Greenland Sea near Svalbard. 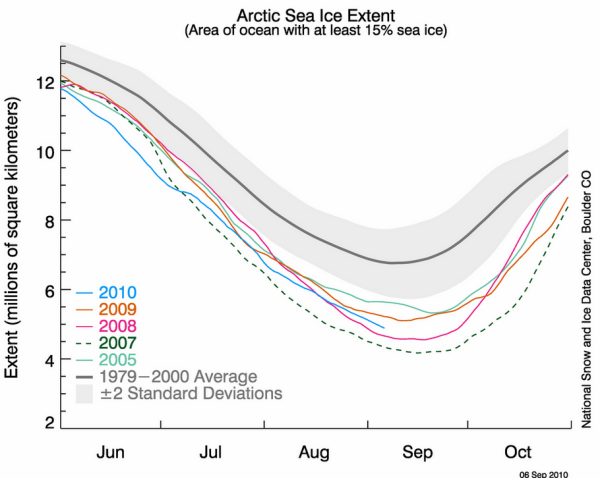 The graph above shows daily Arctic sea ice extent as of September 6, 2010, along with daily ice extents for years with the four lowest minimum extents.

While it doesn’t affect your argument, it is a bit tacky, andcertainly attracts cynicism, to leave 2006 out. It is the highest extent of the 2005-2010.

“Circumnavigating the Arctic Ocean.” – I would suggest that a read of New Scientist, August 28 is called for regarding the extent of Arctic Sea ice. The article “Rotten at heart ” by Craig Mooney points out that the extent of sea ice in the Arctic is only a part of the problem, the VOLUME of sea ice has decreased from 20 770 cubic kms in 1979 to 7 058 cubic kms in 2009.