Gillard is back in the limelight

Julia Gillard returned to the head of the table this week.

And the winner is … Julia Gillard returned to the head of the table this week — both ours and in cabinet — as the independents finally ended the political deadlock, albeit with Katter going his own way (who would have thunk it?). The historic announcement saw the indies’ newfound notoriety continue with blanket coverage in the press.

Revelation — s-x sells! Devout Christian and arch conservative Fred Nile discovered this at the wrong end of a parliamentary p-rn scandal this week. While Fred sidestepped the potentially apocalyptic allegations, NSW MP Paul McLeay joined a conga line of cabinet colleagues on the ministerial scrap heap after confessing to surfing adult sites on the job. 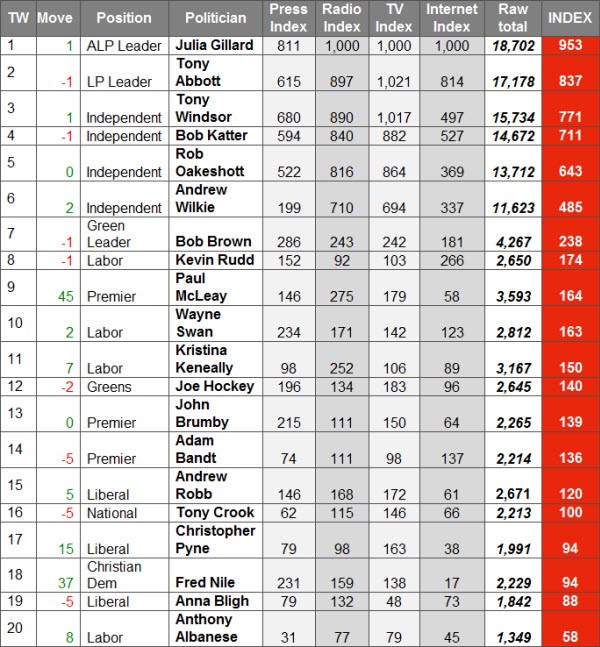 Taswegian anti-pokies independent Andrew Wilkie travelled north in the talkback chart this week. His gamble on the ALP paid off when it promised to cap cash-withdrawals at club ATMs in exchange for his vote. The jackpot? He won a redeveloped Royal Hobart Hospital into the deal.

The lost sponsorship dollars that followed Stephanie Rice’s homophobic tweet wouldn’t put a dent in Hoges’s tax bill. Nor did it achieve quite the media attention. The patron saint of Oz tourism may not be back for a while.