Time to step up

You wanted something much more than the soundbites that our anaemic election campaign offered up? Here it is.

The most interesting words in the chaos were uttered by the independent MP for New England Tony Windsor when he announced that his support — “for what it’s worth” — would go to Labor. As Windsor outlined why, he laughingly referred to his maiden speech — “…I hadn’t looked at it for quite some time, it’s not really worth reading…”

We went back and read his 2002 thoughts on the state of our politics:

We are in a unique situation politically, and have been for the last decade, in my view, where the basic policy framework that the nation is operating under has been by way of agreement by both sides of the parliament. We have had the Labor Party, the Liberal Party and the National Party agreeing with a basic policy framework. I take issue with that agreement taking place over this last decade, and take issue with some of the patchy benefits of that economic framework, particularly, but not only, for country people.

…It is disappointing that, particularly in recent years, there has not been an impetus from country people in this place to recognise the lack of flexibility in policy — that also applies to other marginalised groups. I encourage and challenge country people to take advantage of the political process. There is always talk of the balance of power situation. With 30% of the vote, country Australia has the potential to have the balance of power — irrespective of who is in power in this chamber — and influence the political process far more than it has in the past. There has been a lack of flexibility. The only way to influence that is through the federal chamber.

Fast forward eight years, to a very different time and place. A time and place in which Windsor has the power to name who will form government:

…we’ve seen this merging of philosophies in a sense, and in that there is an enormous opportunity for country people through their representatives to deal with either side of the parliament and actually take political advantage of that moment.

…So I make this plea to country people, some of whom who don’t agree with the Labor Party: this isn’t about philosophy. Philosophy, in terms of both these parties, died about a decade ago or probably longer. This is about using the political system to advantage the people we represent and those people in regional Australia.

So, readers. You wanted something much more than the soundbites that our anaemic election campaign offered up? Here it is.

And now, it’s time for all of us — the media, the disengaged electorate, and all sides of politics — to step up. Starting here: 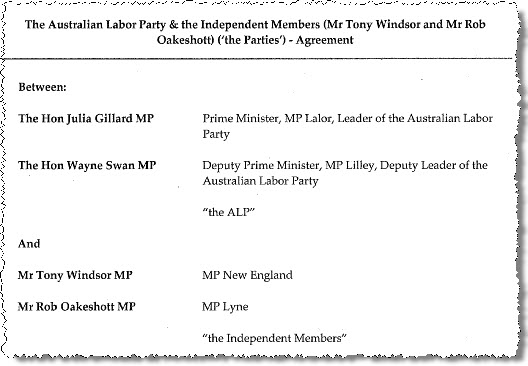 Yesterday’s speech by Rob Oakshott was one of the best by a politician in recent times as so I take umbrage with your term “excruciating”. We ned more polticians to take the time to explain rationale behind their decisions. No more instant taxes on mining, no more trying t explain health changes in dollars added, no more washing away on climate change without reasoning. If I were in the position to do so then we should be challenging the inane questions from the media after the speeches, the infantile efforts of Kerry Obrien on 7.30 last night and the obvious inability of the media, including crickey to see what changes might be possible if we had more speeches on content and less on instant grabs and tweets. We deserve better from you so called professionals.