Hanging out. The independents are talking to Malcolm Turnbull … Mayday! Mayday! Generally, every member of parliament or candidate has moments in their political life they wish they could rewind and play a little differently. Steve Whan, Minister for Primary Industries, Emergency Services and Rural Affairs in the NSW government had his in Queanbeyan on […]

Hanging out. The independents are talking to Malcolm Turnbull …

Mayday! Mayday! Generally, every member of parliament or candidate has moments in their political life they wish they could rewind and play a little differently. Steve Whan, Minister for Primary Industries, Emergency Services and Rural Affairs in the NSW government had his in Queanbeyan on Saturday night. Whan is desperate to try and mend the Labor brand in the biggest town in his electorate and happily jumped at the chance to run a paper aeroplane competition at a school fundraiser in front of about 500 people. He was pretty friendly and gave a commentary on the planes as they left the stage and flew into the crowd. He even introduced one of the entrant’s plane to the crowd saying that it “had writing on it: vote 1 Barra”.

The silence then laughter and shock of the crowd was amazing. Also in the crowd was the hugely popular Queanbeyan City councillor and pre-selected National candidate for the upcoming state election, John Barilaro. Almost straight away “someone” went over to the nearby table to collect the plane as there was safety concerns about them being flown around the room. Any chance it was one of Steve’s staffers with safety concerns about the plane flying around during the campaign and reminding Whan that promoting a rival candidate is not such a good idea — especially when your party seems so doomed in the first place?

Pay freeze at Telstra. Telstra Consumer — CountryWide (the newly created uber-business unit under Gordon Balantyne) has just announced that is is cancelling all remuneration increases across the board for all staff for 2010/11. This on the day staff were to be advised of said increases, after the long and painful annual review process was complete and everything signed off. Mutiny is in the air, as everything staff had been told leading up to this decision indicated that the business was on track.

For most staff who come from the consumer side of the business, this is the second year in a row that raises were cancelled across the company for 2009/10 (to coincide with “our Sol” walking away with however many millions in his kick). Telstra Business Administration 101 — when management screws up so badly that the situation cannot possibly be retrieved, punish the staff!

The battle over IAG. If Apple sees an Apple it doesn’t like it sues for infringement of its trademarks and tries to force the offender to change. If Dickie Branson’s Virgin group sees a Virgin still untouched by his lawyers, off go the warning letters complete with threats to that virginity. So in that vein, what will Australian insurer IAG do (it’s Insurance Australia Group) now that the merging British Airways-Iberia (of Spain) plan to call the combined group International Airlines Group, or IAG?

The BA and Iberia names will no doubt feature in the ads, but IAG will have to get some prominence in marketing campaigns; after all, why introduce new name and not promote it to re-brand the business grouping with business and travellers? Over to our IAG’s lawyers.

How long is a piece of String? The Copper String project was tipped by promoter John O’Brien to go ahead within two years, or fail. Industry and investment analysts claimed that it was not possible to get it up and running within that timeframe and suggested that it was dead in the water before it got started. No doubt they were unaware of the political connection, even when Bob Katter was so vocal in his support. The analysts are still unconvinced of the probity of the project.

Separated at birth? … or is it the other way around? Who could say? 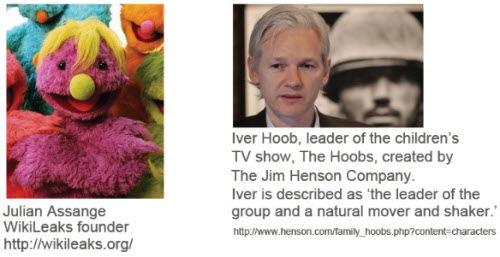