The Victorian Government will probe Fairfax Media over its real-estate junkets program, after the company decided to extend the controversial free-trips scheme into 2011.

The Victorian Government will probe Fairfax Media over its real-estate junkets program, after the company decided to extend the controversial free-trips scheme into 2011.

Consumer Affairs Victoria, overseen by gaming minister Tony Robinson, will investigate Fairfax after it received a formal complaint alleging the company was courting real estate agents with overseas sojourns and discounted advertising that were never passed on to vendors.

Under Victoria’s strict anti-kickback laws, designed to protect sellers from being overcharged for advertising their home, any monetary or non-monetary “benefits” received by real estate agents from media firms for bulk ads must immediately be passed on to the sellers that pay for them.

Promotions for Fairfax’s ‘Domain Target 2011 Incentive Trip’, obtained by Crikey, promise free or heavily discounted trips to agents as a thank-you for placing advertisements in the company’s Domain supplement, that appears bi-weekly in The Age. The scheme will be launched at swanky St Kilda eatery Circa on September 16 with a door prize of an extra “pre-inspection” sabbatical to exotic locales including South Africa, Morocco, Greece, Turkey and the Caribbean. 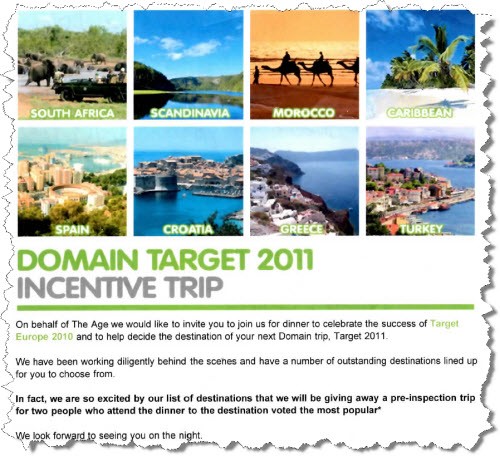 CAV told Crikey Fairfax could be in breach of section 52 of the Magistrates’ Court Act if it “aided or abetted an estate agent to withhold a rebate in contravention of the appropriate legislation”. In addition, a joint action against an agent and Fairfax could lead to a remedial order under section 158 of the Fair Trading Act.

It refused to reveal the identity of the complainant, citing confidentiality clauses, but called on members of the public with further evidence of breaches to contact it directly.

The program exploits a loophole in the law because it is technically linked to “corporate” or “house advertising” promoting the agents themselves rather than sellers’ money. In a common scenario, agents who spend $24,000 on corporate ads receive the equivalent of $60,000 in value and the overseas trip for free.

Legal sources contacted by Crikey suggested that because vendors do not qualify equally for the discounts, agents are effectively benefiting from an existing commercial relationship built around property classifieds. Without a pool of willing sellers, the agents would never be courted by Fairfax in the first place.

Plans for the latest trip come hot on the heels of the company’s 2010 ‘Target Europe’ campaign, in which 70 mid-ranking Melbourne agents took off on a fun-filled trip to Amsterdam, Prague and Berlin (it was originally ‘Target Russia’ but was re-named after fears of a Chechnyan terrorist attack forced a change of venue).

In the email Fairfax says the Circa dinner is to “celebrate the success of Target Europe 2010 and to help decide the destination of your next Domain trip, Target 2011”.

The latest skirmish may also increase pressure on Fairfax to reform its ‘Real Estate Marketing Alliance’, famously referred to by some agents as a “rebate in drag”. Under this scheme agents are paid to promote The Age, Domain and glossy throwaway The Melbourne Weekly on ‘Sold’ signs, in-house publications and Age-branded signage on shopfronts. Observers have alleged some agents have received more than the ads and promotions are worth on the open market.

The Real Estate Institute of Victoria told Crikey the dispute was “a matter between CAV, Fairfax and the agencies involved”. Spokesperson Robert Larocca said: “The REIV is not a party to the relationship between the agencies and Fairfax and so is not in a position to comment on the legality of the arrangements.”

CAV’s decision to investigate Fairfax could also present potential problems for the newspaper’s coverage of state politics in an election year. While the divide between commercial and editorial arms of The Age is fiercely maintained, the optics of a state government assault on Victoria’s broadsheet of record could raise hackles inside the newsroom in the lead-up to the November poll.

Age CEO Don Churchill did not respond to Crikey‘s request for comment this morning.

Vendors’ advertising costs subsidising freebie trips is outrageous. Screwing the vendor for big advertising may work in a rising or good market but when the crash comes the agents’ wings will be well and truly clipped. I look forward to it.