Stopping the Violence … and the traffic in Alice Springs

Last Friday morning I witnessed the most powerful and affecting public event I’ve yet seen in my short stay in Alice Springs. Hundreds of men and boys chanting "Stop the violence!" as they marched shoulder-to-shoulder down the main street of town.

Last Friday morning I witnessed the most powerful and affecting public event I’ve yet seen in my short stay in Alice Springs.

The Stop the Violence march and rally had all the ingredients of a good news story; hundreds of men and boys chanting “Stop the violence!” as they marched shoulder-to-shoulder down the main street of town, impassioned speeches by community leaders and an inspiring and all-too-rare display of common goodwill and purpose to mend the heart of a broken town.

But apart from brief coverage on local ABC TV and radio and a short grab on the Nine network via its local affiliate station Imparja, the event received no coverage in any print or electronic media anywhere.

Around Alice Springs it seems that if it isn’t bad news, then it isn’t good news.

As Human Rights Commissioner Tom Calma said in April 2008 with particular reference to the vilification of Aboriginal men by politicians and the media in the context of the Howard/Brough NT Intervention that saw a proliferation of our own local version of “war p-rn”:

“Over the last 18 months we’ve seen sustained media coverage of child abuse and family violence, but we’ve rarely seen or heard how indigenous people and communities across Australia are taking positive steps to respond to this violence, abuse and neglect.”

Last Friday’s Stop the Violence march not only stopped the traffic in town but also may have lifted just a little of the malaise and downheartedness that often seems to be the dominant sentiment in this troubled town. 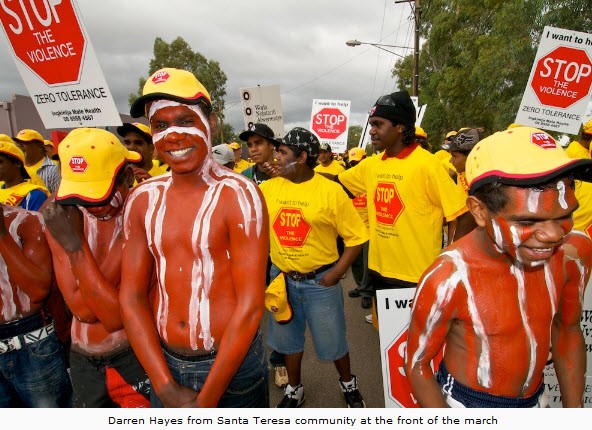 As local NT Police Commander Anne-Marie Murphy told the rally, local violent assault figures for Alice Springs indicate that we do violence here better than just about anywhere else:

“[In] … the latest March 2010 Quarterly Crime Statistics for assaults in Alice Springs there were 455 offences recorded. That is 455 violent assaults in only three months.  For the last 12 months until March this year 1, 522 assaults that is more than Darwin which had 1465.”

To put that into local perspective, about 27,000 people live in Alice Springs while Darwin’s population is just over 115,000.

There is no doubt that domestic and inter-personal violence is all too pervasive in public and domestic life in the Northern Territory.

The last week of the recent federal election campaign for the two NT lower house seats was marred by an undignified spat centred on allegations of domestic violence against candidates from both sides of NT politics.

And in a horrible coincidence the day before the rally the NT Supreme Court in Alice Springs sentenced Joachim Golder to life imprisonment for beating his wife to death in an attack that Justice Judith Kelly described in her sentencing remarks as:

“… a cowardly and vicious attack on a defenceless woman who should have been able to look to you for protection. You have offered no explanation at all for attacking her, other than that your counsel says you were very drunk at the time. You have a lengthy criminal history, including a conviction for manslaughter in March 1993 for the unlawful killing of your brother and a conviction for unlawfully causing grievous harm in 2005, when you stabbed your then de facto wife. Both of these crimes were committed when you were intoxicated.”

The night before the rally NT Police had been called out to a fracas at a local town camp:

“Police were called to Walpiri Camp just before midnight following reports of a disturbance. When they arrived they found a group of up to 30 people involved in an argument, and a 21-year-old man with a stab wound to his leg. The man was taken to Alice Springs Hospital where police discovered another victim of the disturbance who had already been taken to hospital.”

And for all the progress made at the Stop the Violence rally, just the next day a local junior football final was cancelled when rioters invaded the ground, bashed a young umpire and assaulted police. Three men have to date been charged with assault and disorderly conduct following the riot.

“More than 100 supporters, many of them intoxicated, invaded the field during the Hermannsburg v Rovers under-17s grand final on Saturday when a Hermannsburg player was sent off. The riot later spilled into a car park where police, trying to help parents and players leave in safety, were set upon by the mob and pelted with rocks and bottles. One officer was struck with a flagpole, another bitten on the leg and a third had his uniform torn from his back, police said. Earlier, the 16-year-old boundary umpire was knocked to the ground and punched repeatedly.”

From the comments of callers to local ABC radio this morning, it appears that the events at the football game were traumatic and intensely disappointing.

Bookended as it was by these reports of terrible violence it is perhaps all too easy to be cynical about the effectiveness of the Stop the Violence campaign, which has its roots in a June 2008 meeting of more than 400 Aboriginal men at Ross River outside of Alice Springs.

Following that meeting they released this statement:

“We the Aboriginal males from Central Australia… gathered at Inteyerrkwe in July 2008 to develop strategies to ensure our future roles as grandfathers, fathers, uncles, nephews, brothers, grandsons, and sons in caring for our children in a safe family environment that will lead to a happier, longer life that reflects opportunities experienced by the wider community. We acknowledge and say sorry for the hurt, pain and suffering caused by Aboriginal males to our wives, to our children, to our mothers, to our grandmothers, to our granddaughters, to our aunties, to our nieces and to our sisters. We also acknowledge that we need the love and support of our Aboriginal women to help us move forward.”

Dave Richards over at the local blog Alice Online reports that organiser John Liddle told the rally on the Council lawns that:

“We need to get across to the world, our community, black and white, that we are against violence,” Mr Liddle told the crowd. “What these T-shirts are saying is we don’t want to condone it, we don’t to put up with it, we want to stop the bloody violence. We’ve got very strong cultural men here today. They are our leaders. They are right behind this program we’ve got going now.”

John Liddle told Crikey this morning that he was disappointed by the lack of coverage of the Stop the Violence rally in the mainstream media and that:

“I would have expected more coverage. Since the march I have had at least one hundred people tell me how wonderful the rally was for the town,” he said.

“In relation to the violence around the town, we cannot be responsible for everyone’s action. W hat we are trying to do is to change — to give people another option apart from violence. It will take a long time because violence is so common in the community.”

Head over to the Northern Myth blog to see more photos from this story.

Gillard is wrong, bans won’t stop those ‘rivers of grog’

Timeline to a “national emergency”

Thank you Bob for making me aware of this awesome rally. As you correctly pointed out, the media is only interested in perpetrating negative stories in relation to aboriginal people. I’d go so far as to state, that the media is supporting all govts in their racist and patronising attitudes to indigenous people. The Intervention is continuing, thanks to the lies and untruths perpetrated by the media – which depicts every aboriginal man as a pedophile and an abuser. As a person who lives on the south coast of NSW, I’ve noticed, that whenever aboriginal issues are covered, sadly, even on the ABC, the same footage depicting aboriginal people as either being drunk or just gathering in public parks is shown. Rarely do I see productive and ‘ordinary’ aboriginal people in their homes, workplaces etc contributing to their families, their communities and the country. I have to watch Message Stick or Living Black, or read National Indigenous Times, GreenLeft, or articles like this on Crikey. Occasionally, the 7.30 Report covers real stories, but they’re in the minority. Mainstream media and shock jocks have a lot to answer for!

Great to see young men and boys participating! I look forward to another large rally, on White Ribbon Day perhaps!

Correction: Over dinner this evening I have been informed that, in addition to the coverage of the “Stop the Violence” march & rally by the various arms of the ABC and the Channel Nine news noted above, that on Friday 3 November the same footage screened on ABC News in Darwin was also picked up and broadcast by ABC24.