Breast cancer awareness is a worthy and honorable goal ... but we should not give carte blanch to sexist rhetoric, even if well-intended, writes Melinda Tankard Reist, a Canberra author and blogger.

“Help The Hooters”, “Save The Jugs”, “Don’t Let Cancer Steal Second Base”, “Cop a Feel”, “Save The Tattas”, “Save The Boobies”, “Save The Headlights”: these are just some of the slogans which have been used to promote breast cancer awareness and fundraising around the world.

There’s a new slogan appearing on twitter at the moment. It’s “Feel Them Up Friday” (#feelthemupFriday).

EllyMc (@Ellymc) took issue with this slogan, believing it sexualised breast cancer awareness. She expressed her thoughts in a piece titled “On Public Health, Prudes and Hashtags“,  which she then circulated through twitter last Thursday. I agreed with her, so re-tweeted another tweet about it by @daiskmeliadorn.

Well, didn’t that cause a flurry of responses? I was making a big deal out of nothing, picking a fight,  it was just a “fun hashtag”.  I was even accused of saying women touching their own breasts was “sexual”.

Now, I really don’t mind anyone disagreeing with my arguments. I’m kind of used to that. But I’d prefer an argument about what I said, not about what I didn’t say.

I have no issue at all with women touching their breasts and support self-examination. I’ve done it myself and found something suspicious, which was checked out (there’s some family history of the disease, so I try to be vigilant). Fortunately, it wasn’t cause for concern.

But I do have an issue with the kind of language used in these campaigns because it emphasises the sexual desirability of breasts, especially as objects for male sexual gratification — and not a woman’s health and wellbeing.  “Feel Them Up” is associated with the sexual behaviour of some men. The phrase is linked with and suggestive of adolescent males groping girls. (You would never hear the sentence “She felt him up in the back of the car”). 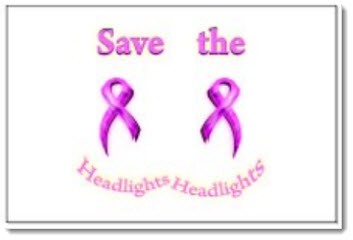 Even if the phrase is appropriated, and it is women doing the “feeling”, these connotations remain. The language contributes to the broader cultural s-xualisation of the br-ast regardless of whatever arguments are employed to justify its use. Using these words in mainstream breast cancer awarenss campaigns normalises them and makes them OK — just a bit of “fun”.  This wider commodified sexualisation of the breasts contributes to many negative outcomes, not least mixed feelings about breast feeding. The sexification of the breast is mentioned in this journal article. (Thanks Dr Samantha Thomas for directing me to it. Samantha also has a piece on problematic breast cancer promotion on her blog which is worth reading ).

Many of the slogans used in breast awareness campaigns are about saving boobies/hooters/jugs. But many breast cancer survivors lose their breasts. What do these campaigns say about them? They survived, their breasts did not. Perhaps this is why survivors who have had mastectomies don’t feature much in breast cancer advertising — like this public service announcement for “Saving The Boobies” (note also the apparent jealousy of the smaller-breasted women towards the woman with the larger breasts who is attracting all the attention).

And don’t tell me this nude modelling site — billed as a “Breast appreciation gallery” —  is really about “Helping defeat breast cancer”. The fundraising angle can be used as a nice cover for displaying women’s n-ked bodies — their  “assets” as described here — all in the name of  a “great cause”.

“Nude models wanted. Share your beauty with us and help Q’BellaT with a great cause… If you’re outgoing, fun, daring, over 18, female; and you think your assets belong here…then…contact us with your information. Tell your friends to join us!!!”

Is it any wonder that the less “sexy” cancer causes find it more of a struggle to attract funding and donations?

“The sexism of breast cancer awareness normalises the view that women are sexual objects rather than subjects with agency and dignity”.

Here’s a great article that expresses my thoughts on this. It’s by Beth Mendenhall, a senior in political science and philosophy at Kansas State College, published in February.

Without the appropriate context, one might interpret slogans such as “I < 3 boobs,” “Help the Hooters” and “Save the Jugs” as lubricious frat-boy appeals to more cleavage shots in the next American Pie movie.

In reality, these slogans and others like them are the new vanguard in breest cancer awareness campaigns. Despite its good intentions, the focus on saving breasts because they are objects of sexual desire is an insidious reinforcement of sexist norms and explicitly excludes most br-ast cancer survivors from the campaign.

The new culture of br-ast cancer awareness can be characterised by two features: appeals to saving the breasts, rather than the women, and slogans couched in vernacular terms such as “boobs” and “hooters”. These campaigns treat women’s bodies as objects whose central purpose is the sexual gratification of the male libido. 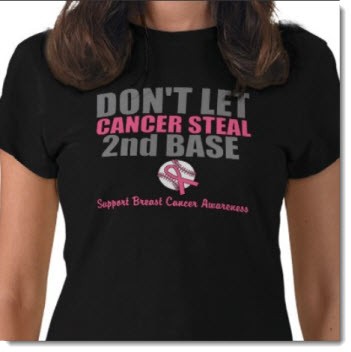 See the wave of “Don’t Let Cancer Steal Second Base” T-shirts. When a campaign to raise awareness and funds to fight a deadly disease appeals to the potential loss of a s-xual object, rather than the potential loss of a human life, it sends a powerful message about what our society values. The sexism of breast cancer awareness normalises the view that women are sexual objects rather than subjects with agency and dignity.

The impacts of sexism aren’t limited to discomfort and irritation. Thousands of violent acts against women, including battery, rape and murder, are committed because the perpetrator views his victim as nothing more than an object created for his pleasure.

Anxiety and loss of confidence, eating disorders and even suicide are symptoms of women viewing themselves as imperfect if their bodies don’t reflect the perceived norm. If we valued women as subjects with agency, rather than passive objects with “boobs” attached, many of these social ills would be greatly reduced.

It’s undeniable that breast cancer awareness campaigns have been effective — despite being less fatal than other types of cancer, breast cancer receives, by far, the most funding. It works because it reflects and reinforces sexist culture, forcing women to assume the position of passive objects of male desire to be considered effective activists. This pragmatist blackmail ignores the violence and self-deprecation women experience as a result of the norms it reifies. Slogans like “We’ll Go a Long Way for a Good Rack” imply that a woman with less-than-optimal breasts doesn’t deserve as much effort.

One of the most ironic effects of boob-centric breast cancer campaigns is their complete exclusion of breast cancer survivors who have had mastectomies. The new culture of breast cancer awareness is perversely inhospitable to those it ought to support by emphasising the link between female sexuality and healthy breasts.

This might explain awareness T-shirts with mock street signs saying “Pardon Our Appearance While We are Under Reconstruction”. A recent manifestation of this exclusion was the Facebook.com bra-color-in-status trend, which explicitly excluded survivors with mastectomies and was a painful reminder of their deviance from social norms of sexuality.

Br-ast cancer awareness is a worthy and honorable goal, but off and especially on-campus campaigns should critically examine the messages they send and refuse complicity with a pervasive culture of sexism. We should not give carte blanch to sexist rhetoric, even if well-intended. When we place women’s value in the maintenance of their sexualised body parts, rather than their subjectivity, we license insidious forms of physical, structural and mental violence.

Melinda Tankard Reist is a Canberra author, speaker, commentator, blogger and advocate for women and girls. This article first appeared on her blog.

Time for a brown ribbon? Data reveals the truth on cancer deaths

Pink my product — it’s that time of year again…

The colour of money: Will the pink movement be ambushed?

Thanks Melinda for exposing this reality – I had no idea! I find it repugnant, for all the reasons that you’ve mentioned. I’ve known at least 5 women who’ve died from breast cancer – all of them lost at least one breast. As a feminist and interested in a just and equal society, I find this sexualisation of breast cancer offensive. I’ll certainly be more aware in future. I’m involved with a women’s health centre, and shall raise this at my earliest opportunity. Thank you for speaking out!

As a guy, I think some (most?) of the slogans are fairly tasteless.

My mother and 2 aunties had breast cancer so I’m a candidate as well and clearly the marketers behind this campaign have ZERO consideration for how vulnerable you are.

A woman’s breasts have some key functions, and no one is denying that her sexuality is a big part of those. But when it comes to having your life threatened, saving these should not be the priority. If we continue to make the saving of the breast, as opposed to the saving of the life the priority we will lose many more women to cancer.

There are enough issues with reconstructive surgery to not make that a viable option for everyone either.

So – thank you Melinda for presenting these campaigns for what they are – cruel, repugnant and non-creative.

Melinda – In a perfect world I’d have no agument. Trouble is, the world in which we live is far from perfect and ‘the message’ has to get out. My mother died of brea$t cancer 10 years ago. Remembering her as a feminist I wonder what she would have made of the notion of the s_xualisation of that which was killing her.
I agree with Meski that the slogans are pretty tasteless but if in an imperfect world they get the attention, get the tins rattling and advance a possible cure, should we be anything other than disappointed that this is what it’s come to?