The ethics of the Murdoch press ... Peace and harmony not likely ... Labor back to election eve ...

The ethics of the Murdoch press. The story of the use of illegal telephone taps by the Murdoch London Sunday tabloid News of the World keeps getting worse and worse. To the members of the royal family, models and sportsmen who were victims of the practice we can now add the former Cutlure Secretary Tessa Jowell and Lord Mandelson, the former Business Secretary. The London Daily Telegraph reports Ms Jowell as saying that she had been told by police that they had found evidence that her phone had been hacked by a private detective hired by the News of the World. Two other former Labour Ministers, Lord Prescott and Chris Bryant, also believe they were victims of phone hacking by the paper and now The Guardian is speculating that as well as a revived investigation by Scotland Yard there might well be an investigation by the privileges committee of the House of Commons. 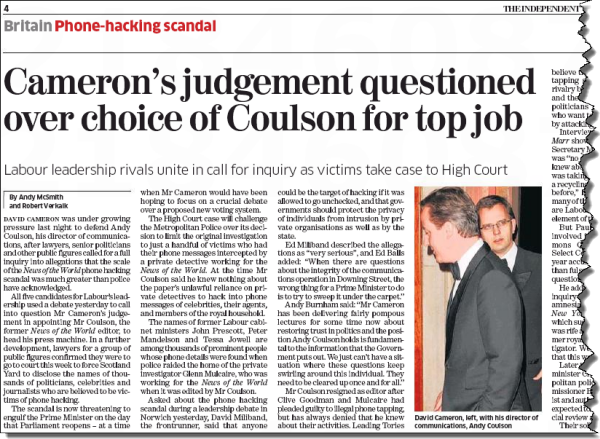 Giving a contemporary political twist to the recent exposure of the investigative journalism techniques of the Murdoch empire by the reporter Sean Hoare talking to the New York Times is that the editor he says knew of the illegal phone taps, Andy Coulson, is now the public relations chief for the Conservative Prime Minister David Cameron. Mr Coulson denies he had any knowledge of the illegal phone tapping which is intriguing because most editors would want to know the source of defamatory material before publishing stories based on it. That the editor of the News of the World did not know suggests at the very least that he did not want to know on the grounds that what he didn’t know couldn’t hurt him.

All in all it is a fascinating insight into the way that the world’s biggest media company approaches the news gathering business.

Peace and harmony not likely. Hindsight will surely show that all the talk by the country independents about reforming the way the House of Representatives does business so that it is less confrontational was just that — all talk. Questions and answers may need to be shorter under new arrangements but they are unlikely to be less provocative and more informative. The Opposition Leader of the House Christopher Pyne made that clear enough yesterday unless the pundits are wrong, of course, and he becomes the actual manager of government business. Then he most assuredly will be in favour of the automatic granting of pairs that he was against yesterday!

Labor back to election eve. The Crikey Election Indicator now has the probability of Labor retaining office at about the same level as on election eve. 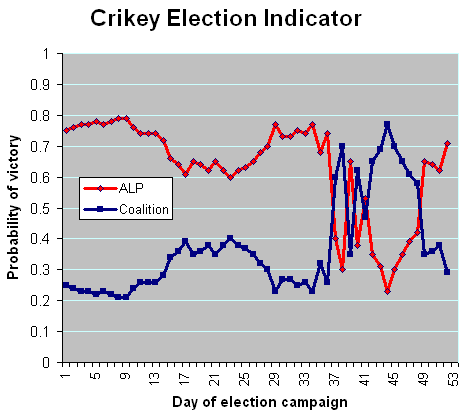 Our other Crikey Indicator suggests that it is most unlikely the Reserve Bank will change official interest rates when it meets tomorrow. 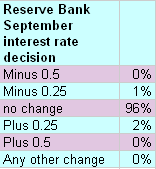 Oxymoron of the day–ethics and the Murdoch press!