How Hoges used PR to beat the taxman

He may not have made an international box office hit since the Crocodile Dundee series, but Paul Hogan certainly proved one thing over the last couple of weeks -- he still knows how to win over a crowd.

He may not have made an international box office hit since the Crocodile Dundee series, but Paul Hogan has certainly proved one thing over the last couple of weeks — he still knows how to win over a crowd.

Hogan has been waging a media war against the taxman for a fortnight now, after the ATO grounded the seventy-year-old as part of Operation Wickenby for allegedly skipping the bill on millions of dollars of unpaid taxes. Guilty or not, the PR war paid off yesterday, as Hoges — complete with fake moustache — flew out of Sydney airport after his classification as a flight risk was rescinded. 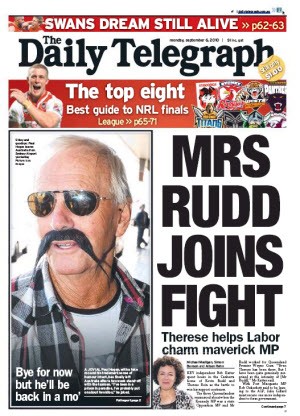 Mike Smith, director of Inside PR, told Crikey that Hogan’s handling of the media during the stand-off was a “big success” and that his use of a disguise to leave the country was a “nice touch”.

“Hogan has always been pretty good on the PR front, but I think he’s done especially well in the last week,” Smith told Crikey. “He’s got a pretty decent well of good will to tap into and he sure did tap it.”

Hogan has been unambiguous about his efforts to cash in on his public image during the two week stand off. When quizzed this morning on why he was allowed to leave the country, Hogan told reporters that the ATO let him go “…because of the bad publicity around the world.”

Hogan is right about the bad press. For the ATO, not him, that is. The Logie-winning actor has been a fixture in tabloid and broadsheet papers both in Australia and overseas since the order was handed down. 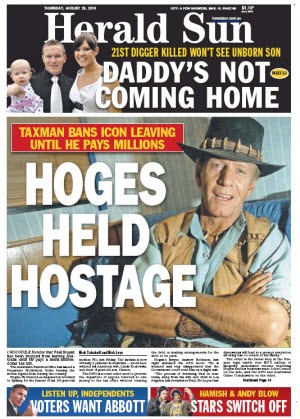 Mike Smith said that most Australians had a soft spot for Hogan and that he had used mockery as an effective tool in his battle with the taxman.

“Nobody likes the tax office, they’re an easy target and he walloped them,” said Smith. “If there is one thing bureaucrats like the ATO hate more than being made fun of in their own country, it’s being made fun of abroad and being made to look like hicks from Down Under.”

The Charlie & Boots star also took part in an extended interview with Tracey Grimshaw on Channel Nine’s A Current Affair last week, where he took the extraordinary step of thanking the Daily Telegraph, The Australian and Channel Nine at the start of the show for telling his side of the story. 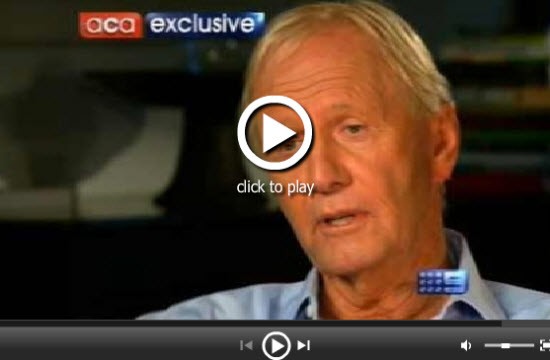 “I just want to push out a thanks to a couple of people,” Hogan said before naming the outlets. “Thanks very much, good on ya. I will not embarrass you or let you down.”

Mike Smith said that the Hogan star had touched all the right “ocker Australia buttons” during the interview and that Hogan’s contribution to Australian tourism was another factor.

“It’s indisputable that his advertising campaign for Australia has been one of the most successful campaigns ever,” said Smith. “What he’s reminded Australia of constantly is that this country owes him a lot.”

While the ATO are still pursuing the matter, Smith said that Hogan was not getting the same bad publicity as convicted tax cheat Glen Wheatley, in part because he was a “more likable character.”

“Of course we still don’t have a lot of facts about what Hogan did or didn’t do,” said Smith. “Wheatley had a trial … where with Hogan we still don’t know what exactly went on there.”

Correction: An original version of this story suggested Paul Hogan praised parts of the media for “telling his side of the story”. The phrase was not actually a direct quote and has been corrected.

Who’s who to be summonsed in Hoges lawsuit

In a popularity contest between the ATO and Jack The Ripper the latter would be the outright winner. Against Hogan they have no hope. If they prosecute in court (as with Glenn Wheatley) it will be more fun for the public than Ashton’s circus.

As I wrote on my blog article Paul Hogan, hype and paying tax, (http://enpassant.com.au/?p=8115) the idea that Hogan has had a win is ridiculous. He has been hit for a tax bill for a tax bill of millions for matters from 1986 on. Normally the ability to go back in time is severely limited – 2 and 4 years, unless there is fraud or evasion called in which case there is no time limit.

This means the ATO is alleging fraud or evasion and has raised the multi-million dollar assessments on that basis. So Hogan has objected and in good time the allegations against him (eg his supposed British Virgin islands companies and payments to them, his residency game playing and so on) will come out. In the context of his tax bill these I should stress are civil matters. Hogan has the onus of showing the assessments are excessive.

The ATO lifted the Departure Prohibition Order because Hogan paid a security against the tax bill. A hard hitting journalist might have questioned him about that. How much, of what nature, what conditions attached and the like. They might also have questioned him about Trelene and GB Films in the British VIrgin islands and Hogan’s connections or lack thereof to them.

It is interesting Hogan didn’t seek a curt order to have the DPO lifted. It may be he didn’t want the reasons for the imposition of the order made public and preferred the secrecy associated with negotiations with the ATO. It is of course a criminal offence for a tax officer to reveal details about a taxpayer.

This is the fake war. The fun will begin when the objections against the assessments are heard and he case for and against the tax bill goes public.

I think a lot of this pro-Hogan hagiography is part of a wider campaign by the rich and powerful to derail projects like Operation Wickenby as it raises more liabilities and collects more tax and the long slow process of the criminal and tax matters begin to gather steam.
This is indicative of a wider problem. Tax policy and tax administration are infected and infested with bodies that represent the interests of the rich and powerful.

The time has come to fund the ATO adequately and to cut the chains of advisory and other bodies designed to hamstring its every move. Maybe then we could see the 40 percent of big business which pays no income tax begin to pay some. Tax policy changes too might be needed to ensure that happens.

I have to declare an interest of sorts here. I am a former Assistant Commissioner of Taxation but want to stress I have no knowledge of the Hogan issue other than what I have read in the newspapers and I would not comment if I did have ‘inside’ knowledge.

When it comes to Hogan, methinks he dost protest too much.

Tom, What evidence have you got that shows it was PR that influenced the ATO and not legal advice? Your’s is a ripping yarn, but without some real evidence it sounds like you ar part of Hogan’s PR team.

Another one of Hoge’s trimphs of style over substance?

I back the ATO to go as hard as it has to to to rein in those big shots who attempt to fly below the radar with their offshore schemes. It’s easy for clowns like Hogan and his ilk to paint the Commissioner as the Sheriff of Nottingham but, let’s face it, without its power to stamp on tax cheats with a heavy foot, it would be open season for everybody to treat their tax obligations as optional at best.

Frankly, I think Hogan should face the same process as Wheatley. Once Hogan has paid his dues he can stay in the USA for all I care, however as I understand it, the IRS are now interested in him as well.