Hop on board the Cousins’ booze bus … Live! Murder trial! …

A fascinating tale in WA Today examines an upcoming biathlon from the sporting state. Plus, The Age takes new media to whole new creepy level and other media news of the day.

Hope on board the Ben Cousins’ booze bus biathlon. A fascinating tale in WA Today examines an upcoming biathlon from the sporting state:

“The inaugural Ben Cousins Biathlon will see competitors retrace the steps the fallen footballer took after abandoning his then girlfriend Samantha Druce in a car on Canning Highway, performing the now infamous booze bus bolt.

Featuring a run and swim — but no bike — the event will prove a challenge for sober competitors who are not paid bucket-loads to remain in peak physical condition. It will include a re-enactment of the swim to nowhere that had Cousins reaching the middle of his attempted river crossing and then turning back after realising there was a possibility he could drown.”

Yes, it’s a tad dangerous and perhaps trivialises the whole drug-addict-fleeing-police thing. We chuckled a little though. 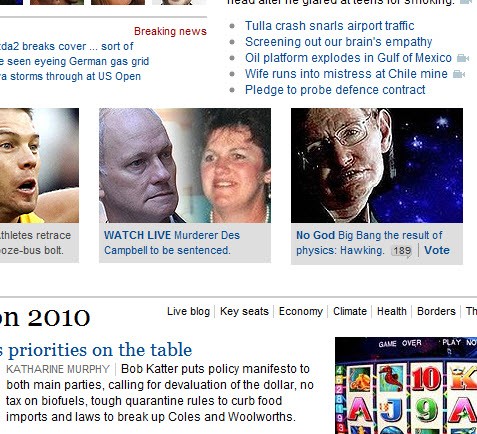 Too much media is overkill

“Longtime CBS News broadcaster Dan Rather came to The Poynter Institute this week to talk about what it was like to cover some of the world’s biggest stories throughout the past half-century… Rather shared his take on the untold stories in politics; the effectiveness of sites that fact-check the news; and the ways in which his experience with bloggers during the Killian documents controversy still shapes his view of them today.” — Poynter

Hi, can you hear me? Wait. You’re breaking up. Hello? Is my web cam working?

“Employers are less inclined to fly candidates out for a job interview these days. To save money, it’s phone screenings all the way, or the dreaded Skype interview.” — Mediabistro

“Remarkably, more than one-third of the two billion views of YouTube videos with ads each week are like TomR35’s “Mad Men” clip — uploaded without the copyright owner’s permission but left up by the owner’s choice. They are automatically recognized by YouTube, using a system called Content ID that scans videos and compares them to material provided by copyright owners.” — New York Times

“Have you seen this yet? AMC’s “Mad Men” Jumps the Shark. It’s a two-minute video created for Babelgum Comedy by writer/director Trevor Williams. I tracked him down, called him up and asked him some questions.” – Advertising Age

An interview with the Taliban

“They filed past me carrying a range of weapons: one held a land mine, another had an RPG on his shoulder, others had grenades strapped to their waists and AK-47s slung over their shoulders. There was a large home-made bomb which had been built into what looked like a milk urn. ‘They’re easy to make. They take just a couple of hours,’ the young man tells me. ‘And we can kill hundreds.'” – Journalism.co.uk

“Apple Inc introduced a new version of Apple TV on Wednesday with shows from just two networks, underscoring its struggles to win over a media industry worried about losing control over the pricing of its programs.” – Reuters

‘Hope on board the Ben Cousin’s booze bus biathlon.’

WA Today writer must have watched ‘The Apostrophy Song’ (Item 8 today); something Crikey omitted to do. Sit them down and make them watch it – a couple of times at least.
I’m also intrigued by the reference ‘Hope on board’ – was that a play on the original wording, an editorial gaffe or just an additional example of continuing growth of illiteracy in the media?