Nothing surprising about Coalition figures

Nothing surprising about Coalition figures. That the Coalition election promises do not add should surprise no one. Opposition figures in a campaign never do so I doubt that the Treasury briefing yesterday will end up having much influence on what the independents decide to do. 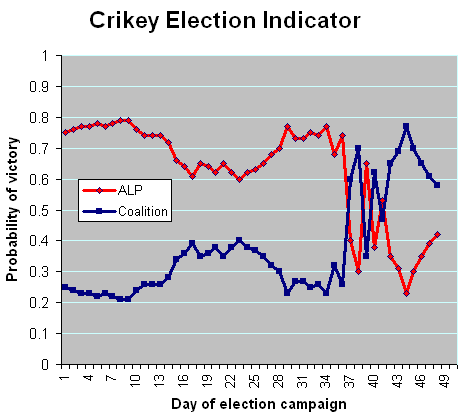 What are they auditing for? So a NSW cabinet minister has bitten the dust for having a bet and a perve using his office computer. What the hell is happening to Australia? Why are the wowserish narks even allowed to check on what an elected politician chooses to read.? What will be ruled out tomorrow? Surely the only relevant thing about Paul McLeay is whether or not he was doing a good or bad job as minister for ports and waterways.

Why supposedly good Christian politicians lie. Tony Abbott, the conservative politician on the verge of becoming Australia’s next prime minister, has confessed that people should not believe something just because he said it. The only truths of his that are to be believed are those promises that he has actually written down.

And today we learn that the Australian Tony is not the only Tony who feels no guilt about telling porky pies. The long serving British Labour prime minister Tony Blair, like Mr Abbott a man who calls himself a devout and practising Roman Catholic, has a similar attitude towards the truth. In a London Daily Telegraph story based on the soon to be published Blair memoirs, he admits to “bending and distorting” the truth as prime minister, but says a degree of manipulation and distortion are necessary to govern, and voters accept that.

“Politicians are obliged from time to time to conceal the full truth, to bend it and even distort it, where the interests of the bigger strategic goal demand it be done. Without operating with some subtlety at this level, the job would be well-nigh impossible.”

Discussing his approach to the truth, he suggests that, at a deeper level, voters retained trust in him because he was trying to do his best for them. He says the public discriminate between politicians they do not trust at a superficial level — “i.e pretty much all of them” — and those they do not trust at a more profound level. This is the level at which the public believes that the political leader is trying to do his or her best for them. “This is the level of trust that really matters.”

And Russian finance ministers speak the truth As a former liquor store owning tobacco company lobbyist I just had to make this my quote of the day:

“If you smoke a pack of cigarettes, that means you are giving more to help solve social problems such as boosting demographics, developing other social services and upholding birth rates.People should understand: Those who drink, those who smoke are doing more to help the state.”

A serious quote or two of the day. Jon Lee Anderson, who has been writing about Iraq in The New Yorker for a decade, on this week’s President Barack Obama address to his nation:

“I listened to President Obama’s address from the Oval Office last night with very mixed emotions … When I heard him say, ‘America has met its responsibilities, now it’s time to turn the page, I winced … America has most clearly not met its responsibilities on behalf of the Iraqis, most of whom had no say in the warfare we brought to them seven years ago. We leave them a Saddam-free Iraq, yes, but with a bruised and battered society and a dysfunctional government which may — or may not — survive our troops’ phased withdrawal from the the country at the end of 2011.

“But Obama’s speech was not about the Iraqis, or really for them, either; it was directed at his American audience. Obama spoke about the great sacrifice Americans had made, in lives lost and money spent, and it is true, the price has been great. But just a quiet reminder, then, for the following facts may come back to haunt us: for every one American life lost in Iraq since 2003, the Iraqis have given twenty-five; and few nations in modern times have had their national patrimony as thoroughly trashed and looted as Iraq’s has — under our watch.”

Good news is no news. I was gently chided in a comment by a Crikey reader overnight for writing yesterday that it didn’t make sense that a government presiding over the best growth rate in the developed world could not win an election and that the salespeople of the Labor government clearly have a lot to answer for.

“Not even god could have competed with the tsunami of misreporting and negative opinion through a coordinated anti Labor media with the sycophant ABC in tow,” wrote the correspondent Mack the Knife.

That’s a bit strong, I thought, as I proceeded on to read this morning’s papers. And what did I find for coverage of those excellent GDP figures showing the Australian economy continuing to steadily outperform the developed world without any signs yet of dangerous inflation? Very little actually.

This Australian success story did not rate a mention on the front page of the national daily The Australian, nor in any of the Murdoch tabloids. Perhaps Mack is right!

A Bex and a good lie down. When you realise that the American Tea Party people, like the author of the email below, are having considerable influence on choosing candidates for the forthcoming Congressional elections in the US you might need one! As that journal of record the Sandusky Register explains it: 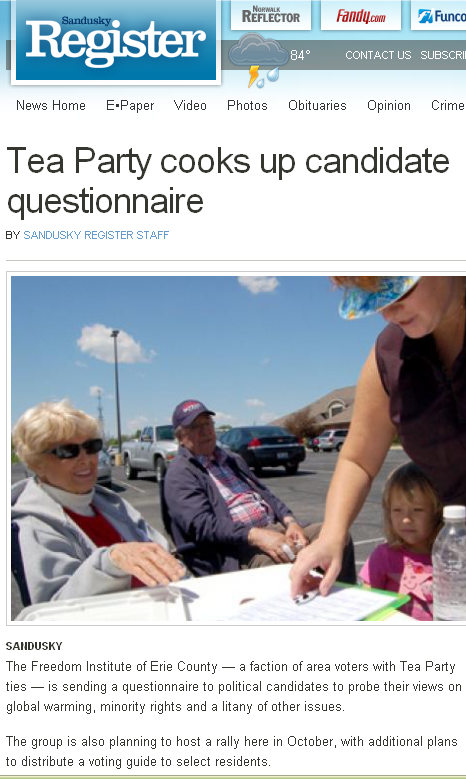 I particularly like point number two: The regulation of Carbon Dioxide in our atmosphere should be left to God and not government and I oppose all measures of Cap and Trade as well as the teaching of global warming theory in our schools. Reads very much like a Bob Katter statement on global warming actually.

We are a Tea Party Group in Erie County called The Freedom Institute of Erie County and we are preparing a Conservative voter guide and would like help from your candidates. We ask they answer the following 15 questions so that we can more clearly define their position on many items. These answers will be put into our voter guide and allow us to rate, recommend, and endorse candidates. Without these questions being answered we cannot give a full endorsement of your candidate.

We have attached a draft of the voter guide along with the questions and a key legend for answers. You are allowed qualifiers to your answers but please keep it short sweet and simple. We intend to distribute this list in Erie County and hope it to reach 1,000+ Republicans and at least 4.000+ Independents that have a history of voting conservatively. The sample ratings in the voter guide do not yet reflect the standing of your candidate in our group.

Please also provide our members and voting guide recipients with an email and phone number contact information. While we are not a partisan group we are a conservative group. While Democrats these days tend not to be conservative we do not want to paint them with all with broad brush and we fully hope that Democrats will respond with what their conservative American values are as with any of us even the most conservative person may have some liberal views and vice versa. We would like to have answers back before the end of the first week in September.

We are also inviting all candidates to our Liber-TEA in America Rally to take place October 9th at The Largest American Legion in Ohio (Located in Sandusky, OH) to speak about their conservative view and how they will benefit Ohioans. the event will last noon to 9pm. This has been sent to as many candidates that we have e-mails for. If you have more emails for those that would be on the Erie County Ballot please forward this email on to them.

Your help in these matters is greatly appreciated.

If Abbott loves plebiscites so much, here are a few more he can have

The largest omission in Obama’s Iraq War Withdrawal Speech was in failing to address the long-term impacts of depleted uranium on the current and future generations. It’s simply too horrible to face up to – or ignore.

Concerning “Good news is no news”, I really cannot believe any rational or even just politically aware (they are not synonymous) Australian would take much notice of what News Corp said about any government of the left.

Re Good news is no news…”This Australian success story did not rate a mention on the front page of the national daily The Australian, nor in any of the Murdoch tabloids. Perhaps Mack is right”……..you bet your sweet life Mack is right. The blatant support for the Abbott Coalition by the News Ltd hacks and the ABC is a blight on so called professional journalism.

Is that the sort of cr*p the Washington rally was about?

“13. I am not an economic Pacifist. I believe that we need to protect our economic borders in order to ensure free and fair trade. Tariffs should be used to stop the wealth and jobs of Americans from leaving her borders”

You mean like Congress did in the early ’30s, triggering copycat moves throughout the world that collapsed world trade and ushered in the Great Depression?

“15. I advocated moving our currency to a debt free supply-side labor based currency.”

WTF does that mean?