Western Australians hate being told their state is slow on the uptake, The Parramatta Advertiser gets a local (non) scoop, Rupert Murdoch gets a 7 percent cut in salary and Utah's mormon press begin preaching online.

Behind the Times in WA. West Australians hate being told that their state is slow on the uptake. But don’t worry because they won’t read this for months if WA Today is anything to go by. For the third time in a week, one of the top five stories is many months old. Why are these items percolating to the top? The headline — Schoolgirl makes small fortune as prostitute (from Feburary 27, 2009) might have something to do with it. People who wondered what the difference between the Brisbane Times (‘Bikie, stripper, hammerhead shark in love triangle murder-suicide’) and WA Today can wonder no more. It’s about 16 months — Kim Serca

The local scoop — Gillard defeats Abbott. The Parramatta Advertiser has the scoop in finally declaring a winner. It’s Gillard in a cliffhanger… 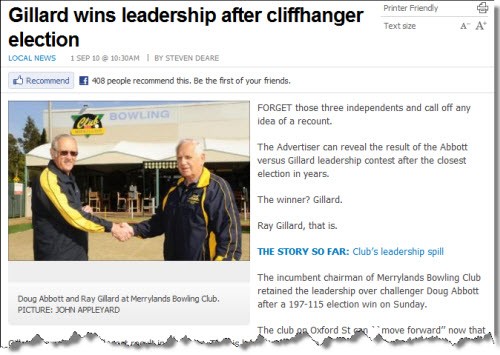 “The club on Oxford St can ‘move forward’ now that Gillard’s survived the closest result in 12 years. That is how long it’s been since he was challenged.

“Like his red-headed namesake, Mr Gillard was thankful many voters did not see cause for change.”

The kings of the information age

“Many of the moguls on V.F.’s annual list of the 100 most influential have rebounded from a disastrous 2009, but the hoodie-and mock-turtleneck-wearing top two never even slowed down.” — Vanity Fair

Murdoch gives himself a hair cut

“The prime minister’s media adviser, Andy Coulson, freely discussed the use of unlawful news-gathering techniques while editor of the News of the World and ‘actively encouraged’ a named reporter to engage in the illegal interception of voicemail messages, according to allegations published by the New York Times.” — The Guardian

The end of gossip in New York

“To quantify and map the reach of New York’s gossip and how it’s changed, you need only look at declining print circulation, shrinking revenues, and shifting web traffic.” — The Village Voice

“The new iPod touch is almost like an iPhone 4, without the phone.” — Gizmodo

“I could tell from Ashlea’s urgent ‘hello’ that we had had a breakthrough. The publicity campaign for Making News had been running for nearly a month and, beneath the din of the election campaign, we’d struggled to make much news ourselves. Nevertheless, we’d baited plenty of hooks, and this time she clearly had a nibble.” — The Scrivener’s Fancy

“Auriane and Sebastien de Halleux are at sharp odds over The Girl With the Dragon Tattoo, but not about the plot. The problem is that she prefers the book version, while he reads it on his iPad. And in this literary dispute, the couple says, it’s ne’er the twain shall meet.” — New York Times

The Sext Files: kids as young as eight try out sexting

Protecting yourself from phone hacking, a handy guide …

Publishers struggle with e-book question: There is of course an easy solution to Auriane and Sebastien’s dilemma as to whether to read The Girl With the Dragon Tattoo in hard copy or an an iPad. Listen to Saul Reichlin’s brilliant reading of the book from http://www.audible.com – no more struggling with how to pronounce the names of all those Swedish people and towns!