The independents remain front and centre this week but new WA National Tony Crook is the list’s biggest mover.

The independents remain front and centre this week but new WA National Tony Crook is the list’s biggest mover, having ruled out Labor’s mining tax to choose between Abbott and the cross benches.

Despite the Coalition now claiming not just the primary vote but the two-party-preferred, a majority of seats in the House of Reps remains the only way government will be formed. And if getting an outcome is taking longer than hailing an Adelaide cab, it reflects that votes are still neck and neck with nearly 11 million in the can.

We can all rest easier now that Wayne Swan has denied harbouring leadership interests. Not only does it rule out the likelihood of the ALP surpassing the NSW left for a land-speed record in leadership succession, we won’t have to overdose on all that charisma.

Which brings us to Steve Fielding who again defied the odds to put himself in the picture, threatening to block Labor passage in the senate until he exits stage right next July. Not so lucky, Wilson Tuckey who, at 75, narrowly missed out, both on our Top 20 and becoming the longest serving parliamentarian, with 30 years under his belt before being put out to pasture. No-one ever accused “Ironbar” of lacking charisma. 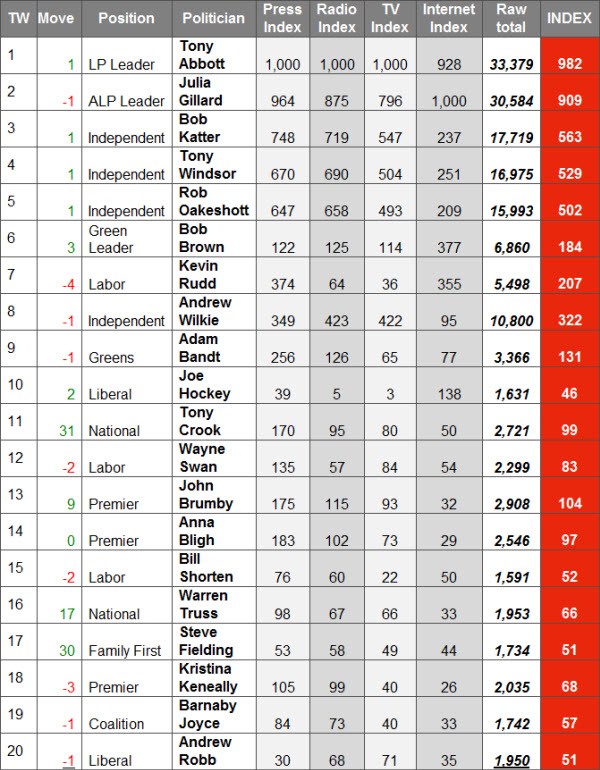 Katter’s rise in the radio charts is like that of country singer Garth Brooks, who once said said, “You aren’t wealthy until you have something money can’t buy.” Don’t spend it all at once, Bob.

And has Ben Cousins hysteria had its last act with the Richmond midfielder playing his  final game on the weekend?