It's the Katterlist (geddit?), a straight-talking vox pop, regional TV dudded again and a fine line for the media in Afghanistan.

Katterlist — get it? Get it …? A nice front-page screamer on the Townsville Bulletin today — but is it a little insulting the paper didn’t believe its audience knew what the word catalyst meant? 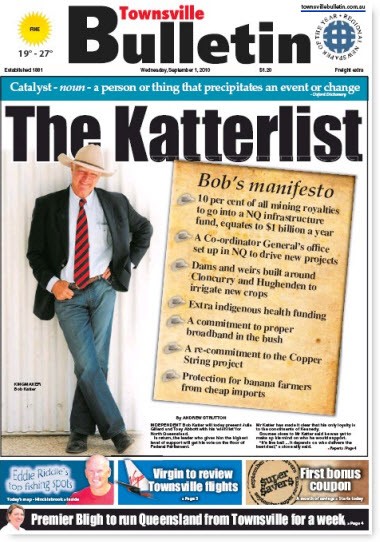 Vox Pop of the Day. The Geelong Advertiser took to the streets to find out what the people thought about becoming a Republic. To be fair, if most Australians don’t know the answer, what chance do the Chinese stand?

Going after the little guy

“To put it mildly, Dean Mostofi is a minor player in the blogosphere. A self-employed loan auditor in Rockville, Md., Mostofi maintains a primitive website where he posts press releases and newspaper articles about the financial industry, the law and other things that interest him.” — Poynter Online

Fine line for the media in Afghanistan

“So-called ’embedding’, the term for the practice by which journalists have been allowed to accompany allied troops in the Iraq and Afghan wars, is not just a way for the military to manage information but is an unspoken compact with the media that helps sustain the conflicts themselves.” — Journalism.com.uk

“Apple will hold a press conference Wednesday, where Steve Jobs is expected to announce the birth of new stars in his product galaxy, including (probably) new iPods and (possibly) a successor to Apple TV.” — Wired

“Facebook loves Hollywood ad dollars, except in the case of one particular film. That would be The Social Network, the upcoming film best known as ‘The Facebook Movie’. — All Things Digital

The reason the Murdoch media has such huge penetration and cut through is that every single other media outlet in the country, including the ABC and Crikey, slavishly promotes their crappy front pages, their crappy fortnightly polls, their crappy opinion pages and their crappy American media mogul boss. Why do you do it?
Oh and another thing…. the Townsville Bulletin provides definitions for big words on its front page to assist its own editorial staff who might otherwise consult a dictionary or something – surely a faux pas in the Bulletin’s newsroom?

Does a Chinese surname and ‘appearance’ make someone Chinese? ‘Jane’ sounds pretty anglo.
Why would the Scots know any better? Although Stephen McElwee seems to have a pretty clear idea what should happen in our country….oh, maybe it was his ancestors that were immigrants and he’s Australian.