Fairfax has been enticed into prominently promoting an infamous classifieds rip-off in the news section of The Age, with a fraud expert confirming to Crikey that the ad for female English bulldog puppies was almost certainly a scam.

Fairfax has been enticed into prominently running an infamous classifieds rip-off in the news section of The Age, with a fraud expert confirming to Crikey the ad for female English bulldog puppies was almost certainly a scam.

Crikey curiously pointed to the ad yesterday and put in calls to the advertising department. Today, a story has appeared in print admitting the scam was booked for a fifth day but pulled when Fairfax realised it was a con. 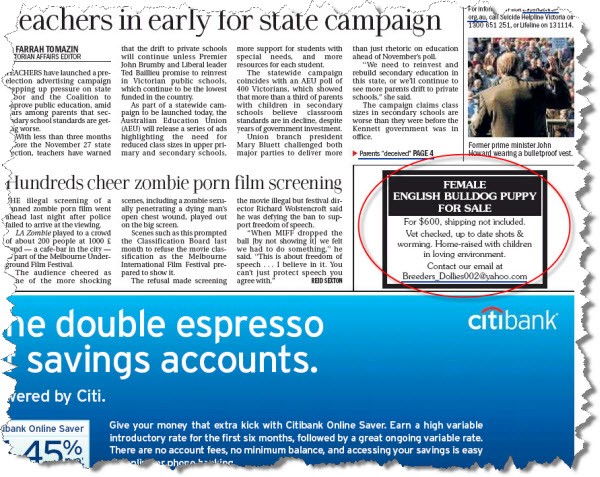 Peter Kell, deputy chairman of the ACCC and chair of the Australian Consumer Fraud Taskforce, told Crikey the ad was “almost certainly” a swindle and reflected the rise of pets being used as scam bait. He says the ACCC was dealing with 280 reports of classified ad scams per month.

“Our initial assessment was that it had many of the hallmarks of a classified ad scam and subsequent contact with the advertiser overnight has confirmed that it is almost certainly a scam,” Kell told Crikey. “This area has become a real focus for scammers because of the ease of which an ad could be placed and the ability for which the scam is difficult to trace.”

In 2007, the ACCC issued an alert to consumers about classified ads offering non-existent pedigree puppies for sale. According to the alert, scammers persuade potential buyers to pay for pedigree puppies to be transported to their address. Payment is then made via money transfer, but the puppy is never delivered and the scammer pockets the proceeds.

The scam is well known amongst the online bulldog breeders community. English website Champ Bulldogs has a prominent warning on its page about sending any payment via money transfer for pedigree bulldogs.

When contacted yesterday, James George, the person behind the email address listed in the ad, offered to sell Crikey an AKC (American Kennel Club) registered female English bulldog for $700 including shipping. He included photos of puppies and said that the dog would be on the next shipment as soon as payment was confirmed.

Peter Kell says dog lovers should be aware of prices for dogs that are too good to be true: “Typically the product or the dog will look like a good bargain compared to what you would normally pay for a pedigree animal.”

An English bulldog breeder told Crikey pedigree pups usually sell for $3000, with some breeders fetching up to $4500. The breeder also said disgruntled buyers had come to them after being conned by ads similar to those featured in The Age.

In trying to close the deal, George told Crikey the puppy had a “wonderful personality” and was “sweet, playful and smart”. He wrote (spelling and grammar intact):

“Due to my commitment with work of God for disable people i could not enable to take care of the puppy and i got relocated to West Africa So she is with my sister in Australia Capital Territory and she needs a caring and i need a loving parent for the Her.”

According to Kell, any correspondence littered with similar spelling and grammar mistakes has all the hallmarks of a classified ads scam. “One of the classic signs is when the seller claims that they have relocated to West Africa,” he said. “Also, the response usually has poor spelling and grammar that indicates it is likely to be email from a scammer.”

What is still unclear is how the bulldog scam ad managed to run so prominently in The Age in the first place. Fairfax declined to comment when contacted by Crikey.

Kell says while classified sections have become a haven for international con artists, it’s “unusual” to see a scam feature so high up in a metropolitan paper. The scam has been doing the rounds online and in print for a while now, he says, with publications such as the Independent Weekly, South Sydney Herald and Beverley Blarney all running ads featuring James George’s email addresses.

The same ad has also managed to get a run in papers around the world. La Prensa (“Ohio and Michigan’s oldest and largest Latino newspaper”), Amerika Woche (“the largest German language newspaper in the USA”) and Around Town (“the voice of Roswell”) have all run advertisements for English bulldog puppies. All of them feature similar wording and near-identical email addresses. 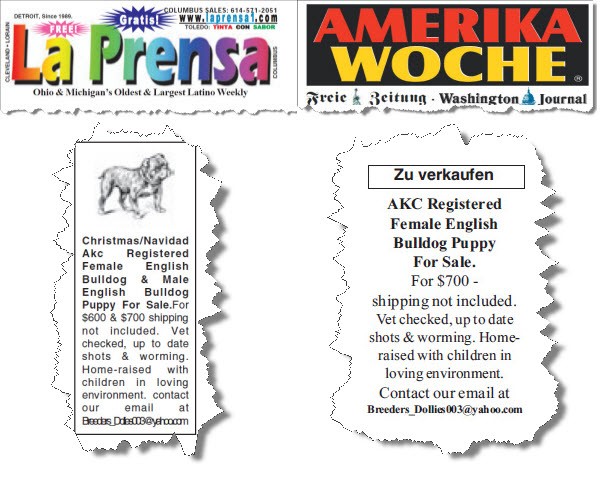 According to other publications who have run the ad, George sends unsolicited emails to advertising departments offering to buy up big on advertising space. Crikey received one such offer from George in 2008 to buy ad space for his bulldogs for four weeks. He wanted to know if credit card would be accepted as payment.

Kell told Crikey it was possible the bulldog ads were being paid for with illegally obtained credit cards (The Age says all the ads run have been paid for). But he hastened to add scammers are making sufficient money from the puppy racket to fund their classified ads.

According to the Australian Bureau of Statistics, $980 million was lost by Australians in 2007 as a result of personal fraud.

The moral of this story: if you want a pet dog select a needy orphan yourself from the RSPCA or an animal welfare kennel. They need our support.

Designer dogs are even more crass than designer handbags. But there will always be a market for both.

W.C.Fields:”Never give a sucker an even break”.
Anyone stupid enough to pay for animal in this manner without as much as seeing it first hand obviously has too much money to throw around.

But…but…but…they promised me a puppy!!!!

Damn it!! I’m going to hold my breath until I die…

Or until someone at Fairfax gives me a consolation unicorn instead. 🙂

The return email address (yahoo) is enough of a giveaway.

As soon as that bank manager in Nigeria puts the money in my account I’m gonna buy one.