It's musical chairs in court, no conspiracy at Tony Abbott's presser last week, why NT News is the holy grail of newspapers and why Wiki doesn't have anything to do with Wiki.

Musical chairs in court. Sydney Morning Herald scribe Kate Lahey published an amusing couple of lines this morning on some shenanigans at Kristy Fraser-Kirk’s showdown with David Jones in the Federal Court yesterday. As the courtroom swelled, Lahey reported that Fraser-Kirk’s spin doctor, Anthony McClellan, had placed a “reserved” sign on four seats while his client conferred with lawyers in the court’s ante-room. But callous members of the rival DJ’s contingent disregarded the note and sat down, drawing a rebuke from McClellan, who protested that it would be strange indeed if the claimant in the case would be forced to endure the hearing alone.

Crikey understands that due to space constraints, one key fact didn’t make it into Lahey’s story. For the remainder of the hearing, Fraser-Kirk’s parents and her partner Chris Drew were consigned to the standing room area with Fraser-Kirk seated uncomfortably next to her DJ’s rivals. Not a good look really, with $37 million dollars potentially hinging on the judge’s ruling. — Andrew Crook

No conspiracy after all … Many asked the question (including our own Bernard Keane) why Tony Abbott’s rather abrupt press conference last Wednesday wasn’t broadcast on ABC News 24. Crikey reader Andrew Kensy asked the ABC directly, and got this response:

Thank you for your email about ABC News 24.

NT News watch: The holy grail for the PANPA Newspaper of the Year… 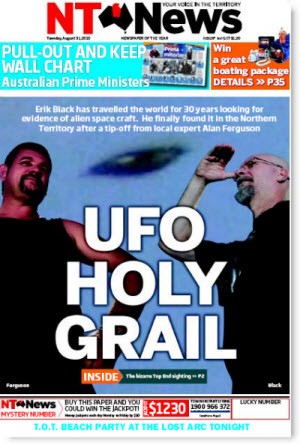 Organising more than 90,000 rows of data

“It began with one of the investigative reporting team asking: ‘You’re good with spreadsheets, aren’t you?’ And this was one hell of a spreadsheet: 92,201 rows of data, each one containing a detailed breakdown of a military event in Afghanistan. This was the WikiLeaks war logs.” — Journalism.co.uk

Why Wiki doesn’t want anything to do with Wiki

“The not-for-profit trust behind the world’s biggest on-line encyclopedia, Wikipedia, is none too thrilled at a constant assumption that it has something to do with the controversial whistleblowing website WikiLeaks. Just for the record, it does not.” — The Guardian

Is “fair and balanced” becoming extinct?

“For some time, ‘fair and balanced’ news coverage and commentary has been on the media endangered species list. Now, with the current Ground Zero Mosque flap, it seems to have become extinct.” — The Wrap

“Allen H. Neuharth, 86, the former Gannett executive who founded USA Today nearly 30 years ago, had some tart words for the people now in charge of his beloved paper.” — New York Times

“Mark Thompson’s MacTaggart lecture, one of the longest ever delivered, contained many messages, but the most important was hidden in the subtext of the speech. It was a reminder to the government of what might be lost if it starves the BBC of resources by slashing the licence fee.” — The Guardian

Nobody really wants to catch the video virus

“Online video creators, advertisers and producers have an unhealthy fascination with viral videos, and that obsession is dragging down the entire industry. Why? Because viral videos are, at their core, no better than a fluffernutter white-bread sandwich, delivering little or no value to anyone.” — Advertising Age

The ABC is efficient, but we shouldn’t fund it