Retailers and big tobacco have ended their campaign against plain cigarette packaging, according to the campaign's website. Looks like it's been hacked, writes Jason Whittaker.

Retailers and big tobacco have ended their campaign against plain cigarette packaging, conceding “colourful packaging does indeed promote smoking.” Or so the website for the alliance of associations and cigarette manufacturers backing the campaign says.

So has the website been hacked? Crikey was sent an anonymous tip off this morning that said: “The Alliance of Australian Retailers Pty Ltd. have quit their campaign against plain-packaging for cigarettes.”

But we couldn’t find anyone — retail associations, tobacco companies or the PR agency responsible for the website — to confirm whether the campaign against the Labor Party’s anti-smoking initiative is continuing.

From 2012, cigarettes will be sold in plain, standardised packages carrying only explicit images and warnings against smoking under a Labor plan angrily attacked by manufacturers and sellers.

As Crikey‘s deadline approached the website for the Alliance of Australian Retailers was still declaring on the front page: “The campaign has ended.” 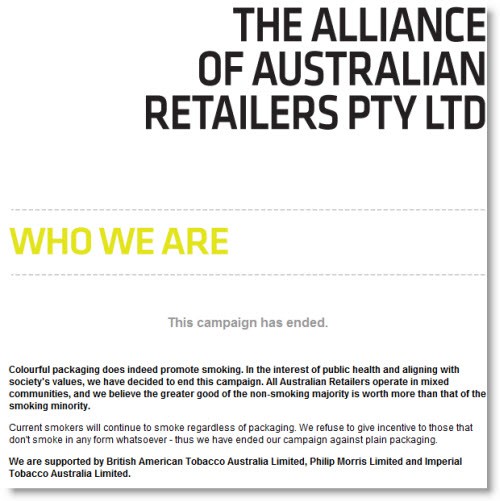 “In the interest of public health and aligning with society’s values, we have decided to end this campaign. All Australian Retailers operate in mixed communities, and we believe the greater good of the non-smoking majority is worth more than that of the smoking minority.

“Current smokers will continue to smoke regardless of packaging. We refuse to give incentive to those that don’t smoke in any form whatsoever – thus we have ended our campaign against plain packaging.”

The alliance includes the Service Station Association, Australian Newsagent Federation and the National Independent Retailers Association. Neither group wanted to speak about the campaign, directing Crikey to Craig Glasby as the “only authorised spokesperson”. He didn’t return calls by deadline.

Sheryle Moon, executive director of the Australasian Association of Convenience Stores, was leading the campaign as ‘director’ of the alliance, including a disastrous interview with the ABC’s Lateline program earlier this month where she admitted she wished her son would quit “because stopping smoking in the community is a good thing.”

Moon has since withdrawn from the campaign and her association has left the alliance. She told Crikey today the priorities of the action were “slightly different” to that of her association. She says plain packaging and a ban on retail display promotions is “another impost on retailers” but says the focus should be on the growing counterfeit tobacco market.

On its ‘what we stand for’ page, the seemingly hacked alliance website lists a number of diseases and health complications associated with smoking. It goes on to say:

“In recent times we have been hit with an excessive tax hike that has made our businesses a target for theft and only further fuelled the flourishing black market in tobacco products. Yet after reviewing the above diseases and compelling evidence that smoking is a negative strain on society, we have decided that we can bear plain packaging.

“In fact, it will even reduce cigarette companies’ printing costs, thus off-setting some of the tax hike burden.

“We believe that reducing smoking is good for our community. But good policies require more than good intentions. Whilst there is no reliable evidence anywhere in the world that plain packaging will stop people from taking up smoking, or help people to quit, it can’t hurt to try.

“With no credible evidence to support plain packaging, the Alliance has statement for Canberra:

“If it might work, but we’re not sure, and it decreases printing costs, let’s do it.” Its links page includes references to ‘myths and misconceptions’ about smoking from the Cancer Council of Australia, while the contact page says: “Any comments or queries can be directed to [email protected]“.

Crikey readers have their s

Cigarettes and tax are both evil

Crikey readers huff and puff on the cigarette tax debate, the big tax on miners and how Catherine Deveny got the boot.

Yep, according to this 2008 study from the British Medical Journal's Tobacco Control journal. Smokers presume cigarettes in plain packs will be "less rich in tobacco, less satisfying and of lower quality tobacco."

Rossco – got it in one. The only reason they could be campaigning against plain packaging on behalf of tobacco companies is if they think it *will* reduce sales.

“We believe that reducing smoking is good for our community. But good policies require more than good intentions.”

If reducing smoking is good, imagine how good eliminating smoking would be. And as for those pesky illegal ‘chop chop’ sellers, how dare they sell leaf that hasn’t been drained and then re constituted with additional and deadly poisons to create addictions.

My heart bleeds for them.

@ZUT ALORS – The packets will have the name on the top and bottom won’t they? I can’t see why the sellers are whinging! The tobacco companies have a long history of lying to us! I’m so glad I gave up almost 15 yrs ago – let’s hope I’ve avoided getting cancer? Two members of my extended family have died from lung cancer in the last 2 years! Both had given up smoking, but obviously not for long enough! It was terribly sad for them and their families. I have a brother and sister who have emphysema – a horrible disease – you just die slowly! I feel very sad when I see young people smoking! I feel like pleading with them to stop!