When you start thinking about it, this caretaker type of government fits in pretty well with the promises of the two major groups.

Steady as she goes. When you start thinking about it, this caretaker type of government fits in pretty well with the promises of the two major groups. Neither promised during the election campaign to actually do anything of substance. Most of the talk was about what should not happen rather than what should. That is precisely what we now have — an administration that just keeps chugging along doing what has to be done without worrying about investing new things. A bit longer of that won’t do anyone any harm.

Perfect for cost cutting. Just imagine what Fairfax could do with no news continuing to come out of Canberra. Declare two thirds of the staff redundant and then amalgamate the Sydney Morning Herald and the Melbourne Age bureaus. As things are at the moment, all we are learning is how little news actually comes out of Canberra other than reporting the huffing and puffing of politicians.

What the indicator indicates. The Crikey Election Indicator is having a merry old time as the market tries to work out what is going to happen about our government. 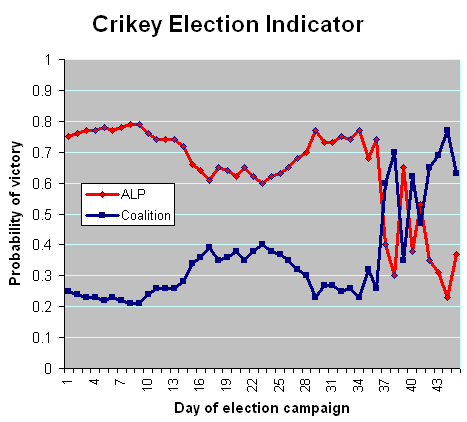 Australian troops for Somalia? If fighting international terrorism really is the vital matter that both Australia’s potential governments maintain then over in the Defence Department they should be drawing up the plans to send our troops to Somalia. Afghanistan, it is now clear, is no longer the centre of the evil al-Qaeda’s activities but that does not mean the terrorist threat has disappeared. It has simply moved elsewhere. 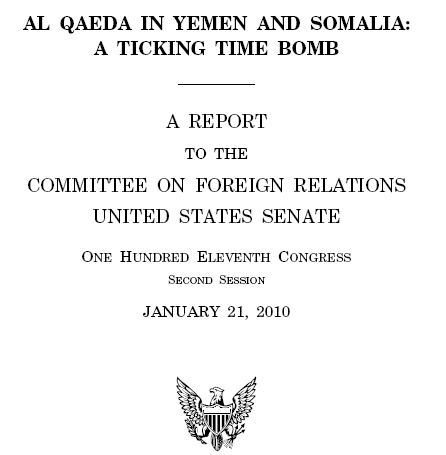 The chairman of the Senate Foreign Relations committee, John F.Kerry, summarised the situation outlined in the report in this way: 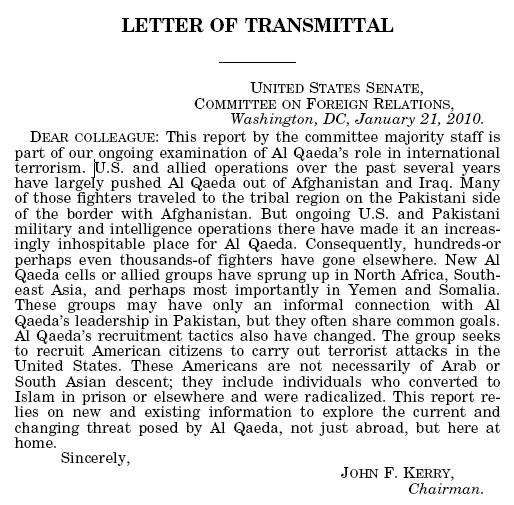 Two stories in the Washington Post over the weekend confirm the foreign relations committee warning.

The AP report went on to refer to this posting on the US embassy website: 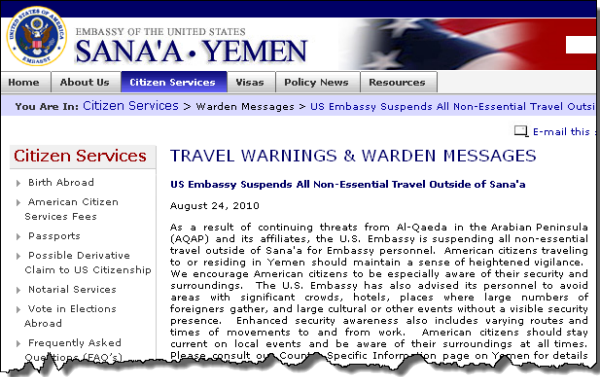 The second Post story gives details of how never before have the radical al-Shabab militiamen attacked so near Somalia’s halls of power as they have last week, bringing them closer to their desire to create a Taliban-like Islamic emirate from which to export jihad abroad. 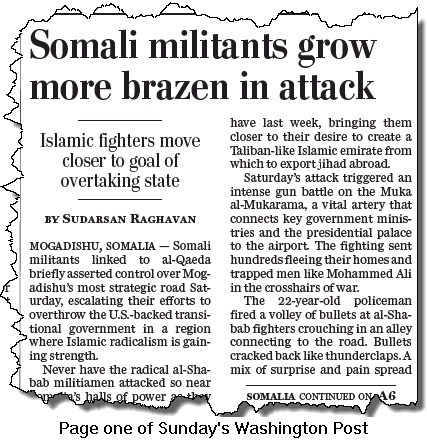 If our politicians are not simply hypocrites, presumably they will now be wanting to tackle these latest outbreaks of international terrorism.

Does anyone else get the feeling we’re chasing ghosts around the world rattling our sabres and benefitting no-one beyond funeral directors?

Al qaeda is the foreign legion wing of the CIA and has been ever since it was formed in the late 1970s to provoke the Russians into entering Afghanistan. Don’t believe it? Then read Zbigniew Brzezinski’s book ‘The Grand Chessboard’ in which he boasts about it.
Ever since then when the Americans have wanted to expand their economic and military influence anywhere in the world al qaeda pops up to provide a convenient rationale. Yemen (strategically located on the major oil transport routes) and Somalia (the entrepot for Africacom – the Pentagon’s latest theatre of operations) are merely the latest two.
Notice also that once al qaeda has served its purpose the objectives transmute. Afghanistan is the current example. Afghanistan was attacked ostensibly because it harboured the “terrorists” who attacked the US on 9/11. That was always a furphy and even if it were true it would still have been illegal to have invaded, not that international law appears to apply to the US and its minions. Now according to US intelligence agencies there are fewer than 100 “al qaeda” fighters left in Afghanistan. But have the Americans, Australians etc left? Of course not. The “mission” as Abbott and Gillard refer to the war in their echo chamber way, has become something entirely different. No wonder that in nearly nine years the major parties have avoided a debate in the House or the Senate.
Australia is a likely target of terrorism but only as a direct consequence of its illegal invasions and occupations of Muslim countries. But we must be careful not to say that out loud. One is likely to get trampled in the rush to destroy what is left of our democracy.

I dunno J. Iraq was about resources and ‘Western’ control over them. Afghanistan had some relevance to strategic resources. I doubt that Somalia has any resources, or even acess to any. If Al Qadir is their only ‘strategic resource’ then Goddess help them, and us. (ie: I hope you’re wrong, and may God not bless Amerika).

Gee Richard,
“Neither promised during the election campaign to actually do anything of substance. Most of the talk was about what should not happen rather than what should.”
I am biased but I can only see one side of politics on the record that has offered little but opposing for the sake of opposing

On one side, health reform, education reform, an NBN, greater amount for pensioners to earn and on the other side the destruction of all the above, transfer of money for diabetes sufferers to private doctors’ pockets, bucketloads of money for breeding rich people…..

Doers Crikey have to give a bullshit balance to their reporting just to keep the conservative readers as customers. Your reporting Mr Farmer puts you into the Glen Milne category of the wankley awards

Health reform, education reform, an NBN – already done by a Rudd Government and not new promises