Dutton’s $40m worth of pork. Word has it that Peter Dutton made some $40 million worth of promises for spending within Dickson if the Coalition was returned. Not sure if these promises were part of the total counted budgeted costing or additional spending. If this sort of promised money was repeated across the 30-plus marginals […]

Dutton’s $40m worth of pork. Word has it that Peter Dutton made some $40 million worth of promises for spending within Dickson if the Coalition was returned. Not sure if these promises were part of the total counted budgeted costing or additional spending. If this sort of promised money was repeated across the 30-plus marginals then Abbott might have a large hole in his costings. No wonder he doesn’t want Treasury near those costings.

Glitz but no glamour for Disney. The movie industry hit the Gold Coast again last week for the Australian International Movie Convention. Lots of energy for the Aussie industry and for the big players like Universal, Paramount and Sony. But where was Disney? Seems the buzz was not in the Disney corner, with no acknowledgement for industry great Alan Finney who was moved on and out earlier this year. His replacement Sonia Bijelic, new head of studio marketing, rules with a iron fist and has more than a few changes afoot. Apparently there’s plenty of nervous staff waiting for the axe.

Also, with the expected mega-success of Tomorrow, When The War Began, Paramount was thanking Disney for rejecting the scripts. The money, sequels and TV spin-offs are expected to be fast and furious. The new head might not have known about that little mistake by her current team. Meanwhile, there was plenty of other talk was on the future of 3D and ‘Gold Class’ cinemas.

Smyth cuts it fine. The successful campaign of the newly-elected ALP member for La Trobe, Laura Smyth, nearly ended in disaster and a possible by-election after she left it until the last minute to renounce her Irish dual citizenship. Under section 44 of the Constitution, a candidate in a federal election is prohibited from holding an allegiance to a “foreign power”, which means dual citizens are banned from running.

In 1999, One Nation candidate Heather Hill was famously forced to relinquish her Queensland Senate seat after the provision was tested in the High Court. But despite Smyth’s pre-selection in January, ALP Head Office said the candidate had only informed the Irish on July 8 — just three weeks before nominations closed on July 29. Under AEC regulations, candidates are required to take “reasonable steps” to abandon their foreign passports before nominations close.

Julia’s no longer on display. As the recent election result continues to unfold, I’ve been able to quietly trawl the corridors of Parliament House and make some very interesting observations. Most backbenchers have posters espousing particular pet projects and interests on display in the windows of their offices. These can include union campaigns and even satirical cartoons. Strolling past Senator David Feeney’s office, there is now only a giant Transport Workers Union poster. What then has happened to the front page cover of the Herald Sun of the day Julia Gillard became prime minister which until recently was so prominently on display? Apparently it quickly vanished Tuesday afternoon. A quick case of shifting loyalties and an ever changing mood on behalf of the Senator?

Secret handshake. Are Wayne Swan and Bob Katter Freemasons? Apparently they shake as such… 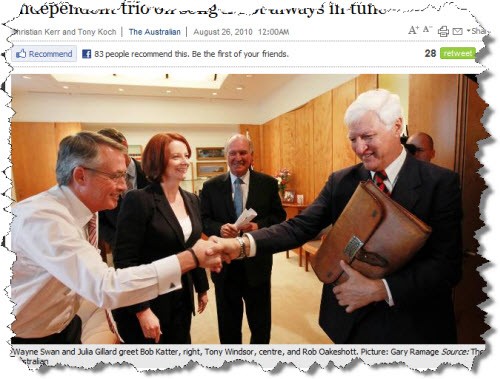 Same-s-x adoption in NSW. The NSW government looks set to rush through debate on Clover Moore’s same-s-x adoption bill to take advantage of the smokescreen provided by ongoing events in Canberra. The bill will be debated concurrently in both houses on Tuesday when parliament returns from the winter recess.

Everyone is at church, but where’s Judas?