Like the similarly utopian Olympic Games, Eurovision Song Contest and World’s Fairs, the Miss Universe pageant is explicitly set up as a carnival of national virtue on the international stage.

It’s the best result an Australian contestant has had in the international beauty pageant since Jennifer Hawkins won in 2004. The Miss Universe pageant has often been mocked for its implication that extraterrestrial life-forms would be welcome to enter, but ‘universe’ here operates more as a rhetoric of universalism. Miss Universe has historically favoured a pleasantly utopian rhetoric of celebrating feminine beauty wherever it is to be found – even though its ideals of beauty have strongly favoured those of white America, where the pageant was founded. (The United States has won the pageant seven times – the most of any nation.)

Between 1960 and 1990, contestants recited the Miss Universe Creed:

“We, the young women of the universe, believe people everywhere are seeking peace, tolerance and mutual understanding. We pledge to spread this message in every way we can, wherever we go.”

Still, like the similarly utopian Olympic Games, Eurovision Song Contest and World’s Fairs, the pageant is explicitly set up as a carnival of national virtue on the international stage. And its contestants are ambassadors, not just for world peace, but for their countries.

The pageant is a collision of commercial imperatives. It began in its current form in 1952 to promote Catalina swimsuits, and has been passed like a football between several other corporate entities. Now it’s well known for its association with entrepreneur Donald Trump, who acquired it in 1996.

Since 1955 Miss Universe has also been a televised event; it has screened across the United States since 1960. In 1972, the availability of satellite broadcasting meant the pageant could be hosted outside the US and still be televised, and could also be broadcast in other countries. The competition has since become an object of international spectacle and national parochialism in the countries whose citizens compete.

Hence, the most revealing segment of the competition isn’t the swimsuit round. It’s the national costume round. The eye-popping outfits routinely donned by pageant constants offer plenty of opportunities for mockery in the media, but they’re best understood as the coming-together of three impulses. First, they reflect an impulse for over-the-top showmanship: they recognise the glitzy artifice of the pageant. They are not so much costumes as props, or even wearable sculptures. They are less interested in adorning or accentuating the body within the costume than they are in using it as scaffolding, like parade floats or tableaux-vivants. And the intention of these outfits is to create an instant, jubilant visual imprint of the country they represent. Australia! Mexico! Guam!

Second, the national costumes feed into romantic ideals of nationalism as ‘folk culture’. Under romantic nationalism, what it means to belong to a particular nation is associated with the deliberate collection of folkloric myths and preservation of local traditions. Romantic nationalism aims to assemble a totemic, almost spiritual identity for the people who tell those stories and continue those customs; and overwhelmingly, it sees the cultures of common people as more authentic and honest than those of elites. Hence, many ‘national costumes’ are artificial recreations of tribal or peasant clothes.

Third, the costumes are eroticised because they are worn by young, physically attractive women. There’s a certain plasticity in the nationalistic tropes they present: the costumes are willing to bend how a garment ought to look in order to maximise its s-xiness. The effect I’m talking about here will be familiar to anyone who’s observed the way so many Halloween costumes are ’sexy’ versions of otherwise ordinary outfits.

In the context of the Miss Universe national costume section, it was essential that Jesinta Campbell’s body look both ‘s-xy’ and ‘Aussie’. Take, for example, her controversial high-heeled ugg boots. We all know they are absurd because ugg boots are comfort footwear; they’re not meant to be glamorous. However, sheepskin boots are one of the items that totemically represent ‘Australia’. Campbell had to make them part of her costume, but the pageant also required her to look as s-xy as possible. The compromise: s-xy ugg boots.

The indigenous prints in Campbell’s costume betray Australia’s deep self-consciousness that it has no traditional folk imagery of its own, and must therefore borrow it from the continent’s first inhabitants. However, the rustic leather belt and swimsuit do evoke other images of Australian national identity: the outback worker and the beach.

It might seem an obvious point to make that Miss Universe eroticises nationalistic tropes. Y’know… norgs! But the way that individual women’s bodies come to stand for the Australian national body is actually a complex and fascinating process. The clichés of Australian identity have historically revolved around the struggles of men to tame the rugged Australian landscape. Squatters turned wilderness into productive farmland; drovers and shearers wrangled with livestock; surfers and lifesavers battled the waves. Nineteenth and early 20th-century mythologies of the national character had it that the laconicism and tenacity that would later be ascribed to our real-life sportsmen and Anzac soldiers were the result of their hard, physical upbringing in the “sunburnt country”.

Women’s bodies, on the other hand, have first represented the nation’s moral health, and then the nation’s vitality and allure. In a country that for a long time was deeply ashamed of its convict roots, women were charged with being “God’s police”, safeguarding British colonial patriarchy. And if the currency lads ran amok, it was the fault of those “damned whores”. From the 1940s up until the early 1960s, ‘bikini wars’ raged on Bondi Beach as local council inspectors charged women with “offensive behaviour” for wearing two-piece swimsuits.

From the 1970s onwards, it has become acceptable to see young, scantily clad women in advertising, in narrative media and on the news. Think of the legions of eroticised, infantilised ‘girls’ who’ve been the faces of iconic Aussie products such as Big M and Chiko Rolls, who’ve been weather presenters, gossip columnists and light-entertainment sidekicks, and who’ve promoted Australia as a tourist destination, a sporting venue or a trading partner.

As I first observed in 2003, Australian female celebrities who are the faces of lingerie brands – including Elle McPherson, Kylie Minogue and Sarah Murdoch (née O’Hare) – circulate in the global image market as ambassadors for a kind of Australian national identity that no longer inheres in the landscape, but instead in the youthful, athletic female body. They suggest that, like these bodies, this country is exciting and desirable.

It’s instructive here to look at Jennifer Hawkins and Megan Gale, currently two of Australia’s highest-profile models. Hawkins has parlayed her Miss Universe win into a prominent career and is currently the representative of department store Myer. She has a beachy, everygirl appeal.

Like Hawkins, David Jones ‘brand ambassador’ Megan Gale has represented her country overseas. In 2003, the Australian Tourist Commission recognised Gale’s popularity in Italy (where she was a successful model) and employed her to promote Australia to Italians. Appropriately for this purpose, Gale’s look is sophisticated and glamorous.

Like Hawkins, Gale found her international exposure had given her status and respect back home – and importantly, both women’s status as iconic Australians is an embodied status that depends on their appearance. It’s telling that Gale has recently followed in Hawkins’s footsteps by launching her own swimwear label.

However, as a country we don’t like so much to talk about what Australian women’s embodiment of national vitality costs those women. It often comes at the expense of their intellectual contributions to Australian life being downplayed or outright belittled, of their s-xual exploitation, and of their inevitable removal from the spotlight.

Here it’s worthwhile considering the fate of Lara Bingle, who first came to public attention as the face (and body) of the failed international tourist advertising campaign “Where the bloody hell are you?” Bingle’s fresh cheekiness made her a totem of Australianness, and her status as a national darling appeared to have been cemented when she became engaged to Australian cricket vice-captain Michael Clarke.

Then came her ‘damned whore’ downfall, thanks to allegations that she had broken up the marriage of AFL footballer Brendan Fevola, who subsequently released a nude photograph of Bingle to Woman’s Day magazine. Bingle lost any remaining public sympathy when it emerged that she and her then-agent, Max Markson, had sold the story of her anguish to the same magazine.

Do most people even remember Erin McNaught, who represented Australia at Miss Universe in 2006? Or Rachael Finch, last year’s entrant who placed fourth? These women returned home with national respect because of their newfound international profiles, have appeared periodically as TV hosts or reality TV contestants, and then have sunk without trace.

We wish Jesinta Campbell well in the national opportunities that her success in the Miss Universe pageant has opened up. But she’d better make some smart choices, quickly. Because if there’s one thing that eroticised nationalism reveals, it’s the importance of striking while the iron – and the body – is hot.

This story originally appeared on The Enthusiast.

News Limited, deep in the Myer, says g’day US A-listers 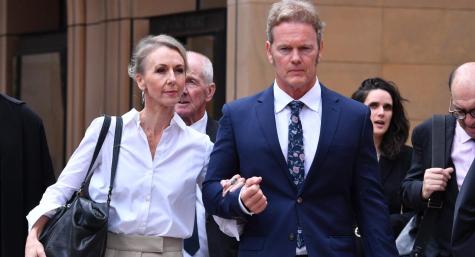 Too beautiful and great personality, looks too nice and wonderful, Thanks.
hostess Roma

Hi, Your blog content is very informative…looking forward for same kind of stuffs…
Thank you for sharing…
Natural foundation