Fairfax scoops paper awards. Plus, a disgruntled subbie's joke at The Age, Look, we trashed our masthead for you Gaz! and other media news of the day.

Fairfax scoops paper awards. Breaking news: people are smiling at Fairfax this morning. The company is back in the black this morning (Glenn Dyer reports in business) and last night its Sydney papers took out the top awards at the Pacific Area Newspaper Publishers Association (PANPA) industry back-slapping awards. The Sydney Morning Herald defended its title of the best metro daily (with a circulation of more than 90,000) while the Sun-Herald was named the best Sunday read.

Sydney publishing chief Lloyd Whish-Wilson said the papers have “not been frightened to do different things”.  Fairfax’s Canberra Times also took out the best regional daily (with a circulation of 25,000-90,000), while The Land won best non-daily paper.

News Limited had to be content with digital awards. Adelaidenow.com.au (the site for tabloid daily The Advertiser) won the award for best newspaper website. Judges said its “experiments with video has put it among the most adventurous in the region”. And The Australian‘s iPad application — widely panned by critics — won it the award for “best innovation in digital publishing”. The Australian says today the app has been downloaded 8500 times since its May 28 launch.

For Crikey, though, there was only one truly deserving winner: the NT News took out the award for best daily newspaper with a circulation of 10,000-25,000. No, seriously. Fellow nominees the Timaru Herald and Bay of Plenty Times didn’t stand a chance. — Jason Whittaker

A disgruntled subbie’s joke? The Age didn’t win a gong at last night’s awards. Perhaps this headline on Wednesday — quickly taken down — explains why…

Fairfax falls off a cliff in Melbourne. Things have gone from bad to worse at Fairfax’s struggling Heidelberg and Diamond Valley Weekly, with the glossy throwaway containing just three pages of real estate ads in its latest edition. As Crikey reported in June, the publication, which once commanded between $6 and $7 million in annual revenue, is groaning under the weight of former Age property editor Antony Catalano’s north-eastern edition of the Weekly Review, which has promptly poached all the area’s major agents.  This week, Catalano’s publication ran 93 pages of ads, with the News Limited Leader publication clocking up 50 pages, compared to Fairfax’s single digits. Fairfax says it will re-focus the mag on local news and relaunch with a new name, the Banyule and Nillumbik Weekly, on September 7 — Andrew Crook

Times for a Weekly change. The current edition of my local paper The Melbourne Times gives itself a full-page ad to announce that from next week it will be known as Melbourne Times Weekly. Presumably this is to bring it into line with Melbourne Weekly, its south-of-Yarra Fairfax cousin. And now that the pesky definite article has been dropped from the masthead the other T-word will no doubt go the same way, and the two shall become one with universal real estate and lifestyle advertorials.

From modest back-room beginnings TMT has been an institution in inner-north Melbourne for some 40 years, though increasingly bland since coming under Fairfax ownership. Its distribution area closely overlaps the electorate of Melbourne so it seems ironic that in a week when much of its readership ditched a100-year political tradition with Labor for the new-leftish Greens, this 40-year journalistic tradition takes a leap to the homogeneous centre. — Crikey reader Jim Hart

Maaaate. Look, we trashed our masthead for you! As the Geelong Advertiser humbly acknowledges, many have accused the paper of being the official record of all things Gary Ablett over the years (both father and son). Well, “we could resist no more”. The paper has changed its 170-year-old masthead today — it’s now the Geelong Ablettiser (see what they did there?) — in a desperate plea to keep the Geelong Cats star from following the money to the AFL’s new Gold Coast franchise. 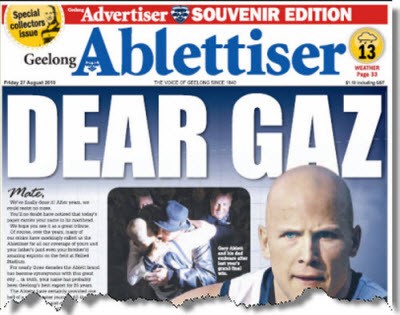 “For nearly three decades the Ablett brand has become synonymous with this great city … in truth, your name has probably been Geelong’s best export for 25 years,” it breathlessly writes on its front page. “The Abletts have certainly provided one hell of a roller-coaster journey. All the highs and lows. The tears and cheers. The ‘special publication’ — teamed with its online video tribute — is a mere “thank-you for all your family has done for this city”. Touching. — Jason Whittaker

After the outstanding success of the 2010 State of Origin Series, the Nine Network and Harvey Norman will partner again to broadcast the 2010 Telstra Premiership Grand Final live and in 3D.

The Grand Final will be played at ANZ Stadium in Sydney on Sunday, October 3, after a huge build-up, with all the day’s action televised exclusively live on Nine.

NRL Chief Executive, Mr David Gallop, said: “The speed, skill and excitement of the Telstra Premiership Grand Final has 3.6 million viewers around the country watching every moment and the chance to see it in 3D keeps rugby league and Channel Nine at the forefront of sports broadcasting.”

This morning, just before 11 am, the media regulator, ACMA issued this press release.

The Australian Communications and Media Authority has not issued a licence to the Nine Network to broadcast the NRL grand final in 3D, contrary to the network’s media advisories earlier today.

Oh dear. Just one call would have saved Gyngell, the NRL and its CEO a lot of embarrassment. — Glenn Dyer

FTC to drop case against Limewire

“…Federal Trade Commission, which was investigating whether the company [Limewire] provided enough safeguards to protect users from inadvertently sharing sensitive files online, said that it had closed its inquiry.” — Media Decoder

“The Ben Cousins documentary has been a major ratings winner for the Seven Network… but critics say footage of the Australian footballer using illicit drugs may be harmful to children.” — The Australian

“There’s little sacrosanct… in the most popular Saudi TV series during the holy fasting month of Ramadan… [The show] was met with rage by religious scholars, with one calling for the arrest of the show’s producers.” — The Age