You have to start wondering whether either Labor or the Coalition really wants to become the government of Australia under the conditions where it would have to deal with independents and a Green.

Does either side really want to govern? You have to start wondering whether either Labor or the Coalition really wants to become the government of Australia under the conditions where it would have to deal with independents and a Green to get the numbers in the House of Representatives and with Nick Xenophon and Family First in the Senate until 30 June and with the Greens from 1 July. Certainly neither Tony Abbott nor Julia Gillard is showing much enthusiasm for the task ahead.

Eventually the matter will have to be resolved in the House of Representatives. So if Miss Gillard really does want to stay Prime Minister the day is fast approaching when she should declare that she intends to continue leading a minority government until she is defeated. The Parliament should be called to sit as soon as possible giving the independents a deadline against which to make up their minds what they intend to do.

A Labor disaster. The leader in London’s The Economist this morning reminds us of a simple truth that I for one have tended to overlook while caught up in the drama of who actually won Saturday’s election. For Julia Gillard and the Labor Party this election has been little short of a complete debacle.

“The Australian election: When the hat doesn’t fit“, headlines The Economist: “Australia’s dead-heat election was exciting. But the drama masks a desperately impoverished politics”.

“The result is a disaster for Ms Gillard. Not since the Depression have Australians rejected a first-term government. She chose to go to the country when Labor was ahead in the polls, just two months after fronting a coup against Kevin Rudd, seen as an autocrat and a loser after having abandoned his signature climate-change bill.

Voters don’t much like assassins, but a half-baked idea for a people’s assembly on climate change and a tack to the right on immigration made Ms Gillard look shallow as well as disloyal. Presiding over a party at war with itself, she would struggle to assert power as prime minister.”

A macho man in politics provides real photo opportunities. If there was an award for the political art of providing media photo opportunities it would surely be no contest. Russian Prime Minister Vladimir Putin would win hands down.

The man who is expected to reclaim his former job as the country’s President at the next election has mastered the art of using television to cultivate the image, as the Moscow Times put it this week “a rugged leader beloved by the Russian people.” 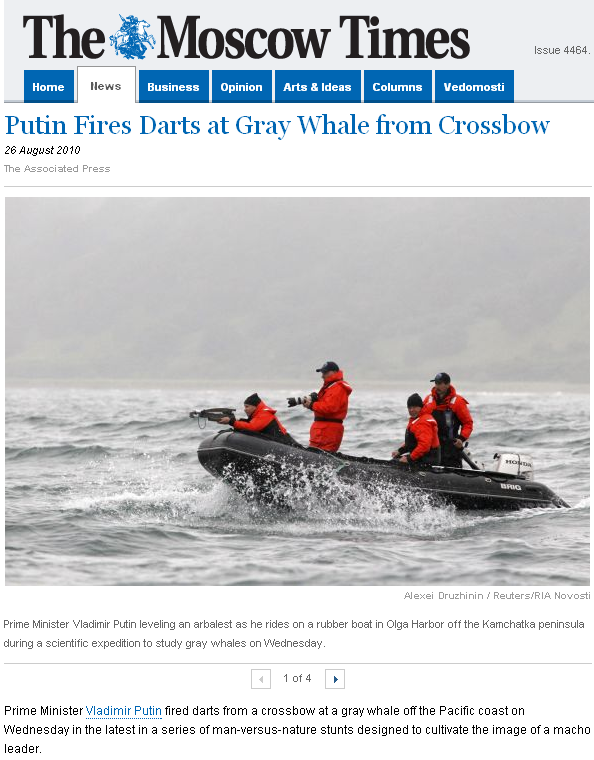 This week he was perched precariously aboard a rubber boat in choppy waters firing darts from a crossbow at a gray whale off the Pacific coast to collect skin samples from a whale.

Last week he was co-piloting a fire fighting aircraft not long after being photographed fishing bare-chested in the Altai republic, and shown on television diving into an icy river and swimming the butterfly stroke.

Back in April the macho Putin attached a satellite-tracking collar onto a tranquilized polar bear, shooting a Siberian tiger with a tranquilizer gun and releasing leopards into a wildlife sanctuary.

Now a real reason not to like them. I have discussed the matter with Paunch and Miss Polly and we agree that this fatwa business is getting out of hand. 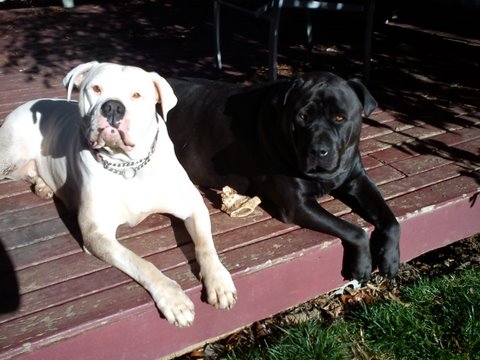 What do they mean “unclean”? We’re Collingwood supporters

It was reported this morning that Iranian authorities have banned all advertisements for pets, pet food and other pet products. The decision by Iran’s Ministry of Culture and Islamic Guidance comes after the fatwa was issued by powerful cleric Grand Ayatollah Nasser Makarem Shirazi.

While keeping dogs as pets has become increasingly fashionable in Iran in recent years, says the London Daily Telegraph, the fatwa cited Islamic tradition, which dictates that dogs are unclean.

An Edinburgh fringe festival report. Funniest joke of the festival has gone to this two-liner from comedian Tim Vine:

“I’ve just been on a once-in-a-lifetime holiday. I’ll tell you what, never again.”

Personally I preferred this one from the official top 10 by Jack Whitehall: “I bought one of those anti-bullying wristbands when they first came out. I say ‘bought’, I actually stole it off a short, fat ginger kid.”

The dangerous spread. Spare a thought for your Irish cousins. The reward for its government introducing the toughest austerity measures in Europe to try and ward off the horrors of too high a government deficit in the wash-up of the global financial crisis is that interest rates are on the rise again.

This graph from the Atlanta Fed in the US shows that the Ireland-to-Germany, bond spread is back near the levels reached during the May financial crisis. 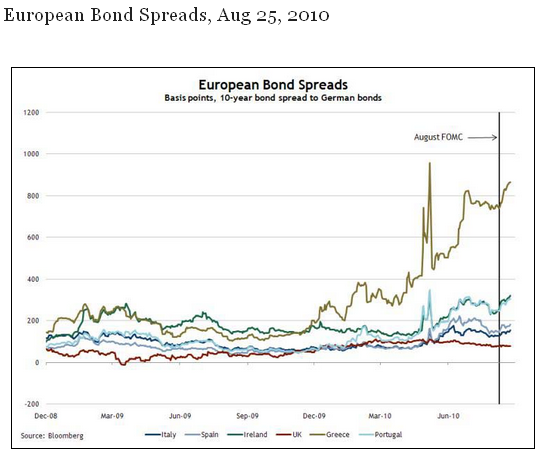 I suppose things could be worse. Ireland could be Greece where the interest rate demanded by the investors of the world keeps rising.

I wonder at what point the Greek people say enough is enough and force their government to take the knock and stop paying the banks it owes money to? Not long I expect and I hope Australia does not have a caretaker government when the financial crisis that causes comes along.

Can the ranga beat the nerd?

” So if Miss Gillard really does want to stay Prime Minister…”

That’s Ms Gillard to you, Mr Farmer, thank you. Her marital status has no bearing on this issue at all.