Today Virgin handed down a full year profit result that sees it continue to make more money than the much larger Qantas/Jetstar group.

A very different Virgin Blue was flagged by former Qantas senior executive John Borghetti today when he handed down a full year profit result that sees it continue to make more money than the much larger Qantas/Jetstar group.

It made $20 million from flying in the six months to June 30, or the period when Qantas flight earnings crashed to just $17 million ($10 million for Jetstar and $7 million for Qantas international and domestic combined) after the Australian carriers were sucked into a fare fight with Tiger in April, May and most of June. 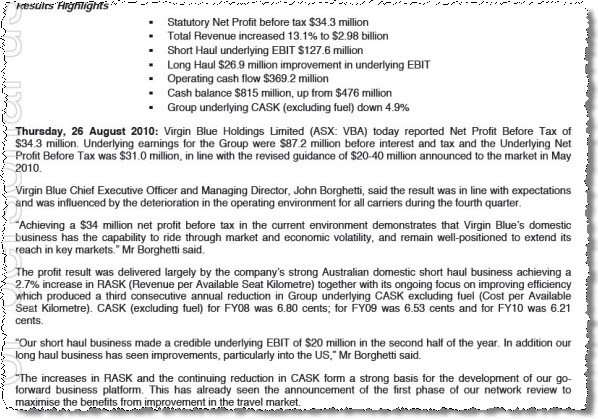 Virgin Blue through V Australia will have two global hubs, at Abu Dhabi and Los Angeles, each literally connecting to a half of the world with hundreds of code shared flights a day, and fed by non-stop flights by Virgin Blue’s V Australia 777s.

There will be, subject to regulatory approvals, three  major alliances, with Etihad, Delta and Air NZ.

There will be luxury business class seats on Airbus A330-200s flying, initially, on the transcontinental routes between Perth and the eastern capitals.

And they will all happen before current financial year is over.

Borghetti said, “Virgin Blue has built up an incredibly efficient airline in the last 10 years, and it can use that to great effect on the corporate market which is dominated by Qantas.”

He also announced V Australia was quitting South Africa and Thailand flights in February, which means he must have won a tough argument with his major shareholder, Richard Branson, who is passionately attached to South Africa, and had sworn a huge and lasting commitment to the link to Australia, but which suffered badly from the restrictions placed on its 777-300ER flights across the far Southern Ocean.

Borghetti shied away from pending announcements about imminent changes to Virgin Blue’s cabin products but would have left Qantas in no doubt that he knows where they are vulnerable and will exploit those weaknesses.

He said Virgin Blue would lift its capacity on domestic routes, which had remained very profitable for Virgin Blue throughout the year on their own right, by 6-8% compared to the 9.6% Qantas and 30% Jetstar expansions announced by the Qantas group yesterday.

He emphasised it would stay in the leisure market as well as invade the corporate sector, all in the one airline rather than the dual brand strategy of Qantas/Jetstar.