The wonderful irony of the dullest Federal campaign ever coming up with the most interesting result ever has not been lost on most of the media.

Well that was fun wasn’t it? Shall we do it all again? That certainly seems to be the view of Tony Abbott, with the Nationals probably quietly threatening that they would rather make Adam Bandt their leader than give all that power to Katter, Windsor and Oakeshott. One suspects Tony is in as big of a bind as Julia.

The wonderful irony of the dullest Federal campaign ever coming up with the most interesting result ever has not been lost on most of the media, although the number trying to make some pointless comparison to the UK is disturbing. Note to journos — the UK LDP is a party, not a bunch of independents, and they easily have the numbers with the Conservatives. What we have is Shemozzlus Majorus.

Bob Katter — number three man in Australian politics, haven’t we all been waiting to be able to say that? The rest of the list dominated by the biggest winners, the independents, Brown, Bandt, and the biggest losers, McKew, Shorten, Arbib, Keneally and Bligh. 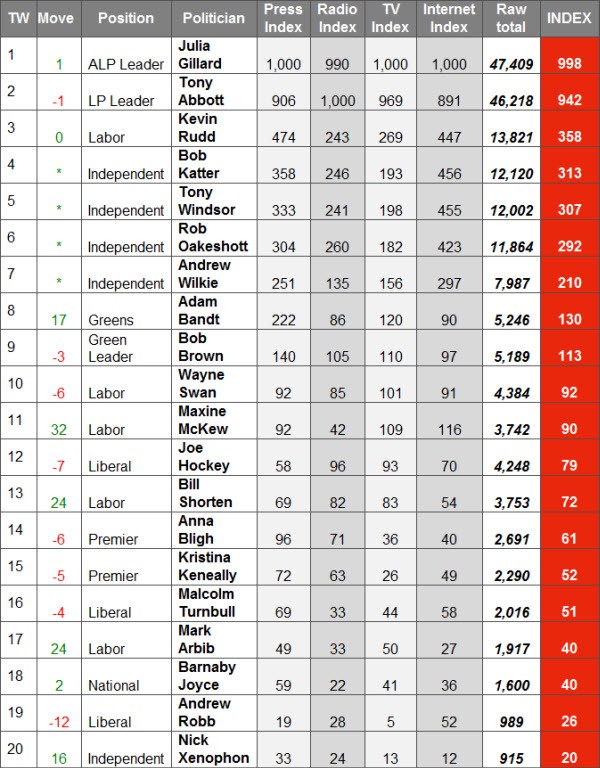 Katter and Windsor have leapt into the talkback top five, quite a few fans and also a few detractors making their feelings known.

Hoges’s face has dropped with the recent news, as the ATO tightens the screws.