Bringing back the Crikey Indicator

This choosing of a government business is quite beyond me. The best I can offer is to bring back the Crikey Election Indicator which has been going up and down like a yo-yo since Saturday night.

Bringing back the Crikey Indicator. I cannot explain what is going on and I’ve no idea how things are going to end up. This choosing of a government business is quite beyond me. The best I can offer is to bring back the Crikey Election Indicator which has been going up and down like a yo-yo since Saturday night. 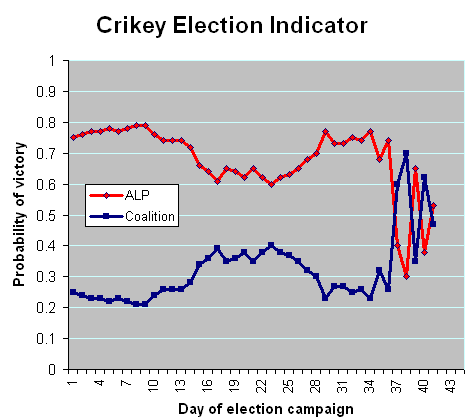 At the close of voting in the eastern states on election night Labor were given a 74% chance of becoming the government. Since then the Labor probability has been as low as 30% and at midday today was back to being the favoured way at 53%.

A real governance problem. If Tony Abbott means what he says about not trusting the Federal Treasury then this country really does have a governance problem and it’s nothing to do with how the House of Representatives operates. That the country basically has a public service capable of giving independent and impartial advice to whatever party or coalition is in government is the cornerstone of our democracy.

Apparently the Liberal Party, and presumably the National Party although I have not actually heard its leaders make a comment on the subject, now believes that the Treasury would not make an honest assessment of the economic costs and consequences of the promises it made during the election campaign.

It is hard to think of a more serious attack on the integrity of a group of public servants who are largely the same ones who served the Government of John Howard for more than a decade. The Secretary of the Treasury Dr Ken Henry was appointed to the job in April 2001 and appeared to have the confidence of his ministerial superior Peter Costello until the Coalition was defeated in 2007. Since then the most serious incident that might have undermined confidence in the impartiality and independence of the department was the treacherous way that the then Opposition Leader Malcolm Turnbull was secretly fed incorrect information by a mid-ranking official.

To the great credit of Treasurer Wayne Swan there was no over reaction to Godwin Grech’s madness. Dr Henry was not held to be responsible nor the whole bunch of Treasury officials tarred with the Grech brush. But now, supposedly on the evidence of one apparent leak casting doubt on the accuracy of Liberal costing of an election promise, the Treasury as a body is not to be trusted.

I fear that the Liberals involved — Tony Abbott, Joe Hockey and Andrew Robb — do not realise the potential for their tactic to undermine public confidence in the whole system of government. Hopefully one day not too far away they will apologise for their stupidity.

Certainly no boom. Australia might be doing better with its economy that most OECD countries but there is certainly no boom time. The private new and expected capital expenditure figures out from the Bureau of Statistics this morning has the trend estimate for total new capital expenditure (in volume terms) falling 0.8% in the June quarter 2010 with the seasonally adjusted estimate falling 4.0%. 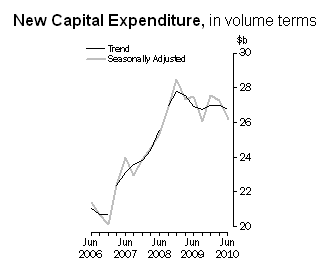 The figures suggest that the growth in the Australian economy is still modest and thus unlikely to be producing the kind of inflationary pressures that would justify any rise in official interest rates for some time yet.

I should add that the median estimate of 17 highly paid finance industry economists surveyed by Bloomberg News was for a 2.3 percent gain in capital expenditure rather than a 4% fall.

“Hopefully one day not too far away they will apologise for their stupidity.”
ROFL and gasping for breath.

Any analysis about why the Crikey election indicator was so abjectly wrong for the entire campaign?

I’m with David Hand. Of course we don’t know that the Crikey election indicator was wrong thruout the campaign, but it certainly seems to have got the most important bit wrong. Likewise the betting markets that Crikey frequently reported.

I am reluctantly returning to opinion polls as my seer of choice until someone can explain what seems to have been big mistakes by the alternatives.

David and Gavin
The Crikey Indicator is not another form of opinion poll. It is the collective wisdom of people who participate in a market ab out who will become the government. The probability at the close of polling was put by this market as a 70 per cent chance Australia would end up with a Labor Government and a 40 per cent chance Australia would end up with a Coalition government.
If such markets are to have any value then at 30 elections in every 100 the underdog – in Australia’s case this time the Coalition – should win. If underdogs win less than 30 such elections in a 100 then we can say that things like the Crikey Indicator have got it wrong.
Somewhere on one of my old web sites I have a collection of previous elections – we need plenty of them to get a meaningful sample – on which there have been markets and they show that markets/indicators get the probabilities about right.
You might find the website of the Iowa University Business School of interest as it has several items discussing this question. The site is at http://tippie.uiowa.edu/iem/index.cfm

Not quite sure why the Opposition should apologise for something they haven’t said. If they had said it, on the other hand, they’d be justified. While it is meant to be impartial, the fact is that Treasury (and Finance and all the rest) serves the public only through the government of the day. The public service’s over-eagerness to please the government of the day in myriad ways – including by collating for it the infamous electorate briefs, clearly party-political work – makes it natural that any Opposition (eg Rudd’s in 2007) would be reluctant to trust that the costings would be impartial.

(Why other than pro-government partiality did Treasury cooperate with Julia Gillard’s efforts to close the mining tax row by oh-so-conveniently rebasing its estimates of commodity prices, thus making the federal budget hostage to the China boom continuing unbroken?)

Abbott should simply call it the way he sees it and not hide behind poor excuses. ‘Confidence’ wouldn’t be damaged in the slightest.