MasterChef prison slammed — then buried. This item was running hard on the Herald Sun website yesterday — only to miraculously disappear when the substance of it was denied by authorities. But the damage was done, with many other media outlets feeding off the story. Rather than say ‘we wuz wrong’, or even just running a […]

MasterChef prison slammed — then buried. This item was running hard on the Herald Sun website yesterday — only to miraculously disappear when the substance of it was denied by authorities. But the damage was done, with many other media outlets feeding off the story. 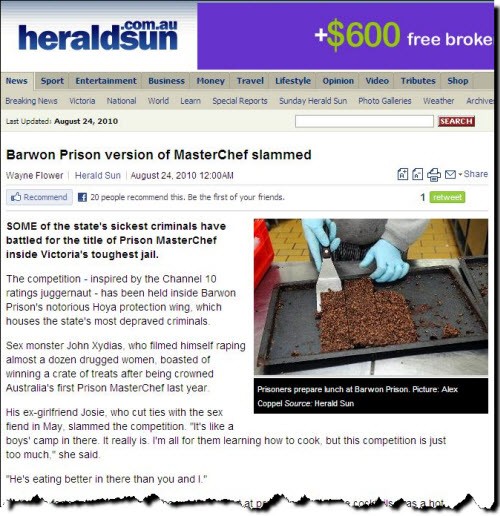 Rather than say ‘we wuz wrong’, or even just running a story saying the claims had been denied, News Limited did what it does best when it comes to news that does not fit its paradigm — pretend it never happened. The Age, to its credit, ran a story correcting their earlier report. — Terry Towelling

How congenial. The Channel Nine news team in Brisbane got a little excited about the Miss Universe pageant yesterday, with minute-by-minute coverage via Twitter… 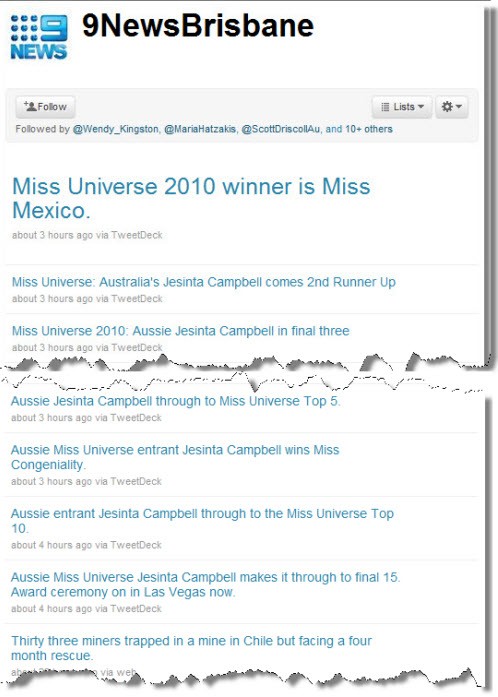 Out of Africa. The deputy opposition leader in the Northern Territory wants to head off an “African voyage” with her partner in tow — all on the taxpayer’s dime. The NT News, naturally, couldn’t resist… 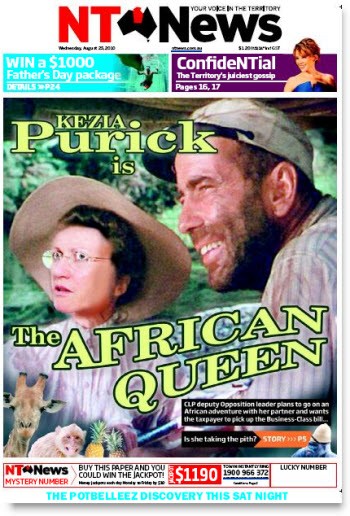 “Newspapers as we know them will be irrelevant within 12 years, according to futurist Ross Dawson, who said journalism would be largely ‘crowdsourced’.” — The Australian

“Argentina’s president moved Tuesday to take over the nation’s main supplier of newsprint, saying two leading newspapers illegally conspired with dictators to control the company three decades ago and then used it to drive competing newspapers out of business.” — Associated Press

…and their front-row view is a ‘travesty’

“Allowing Fox News to move up to the first row in the White House briefing room was a ‘travesty of a decision’, according to Ed Chen, the former White House Correspondents Association president who left that post just a few months ago.” — MediaMatters

“Pugh, the creator of Star Wars Uncut, an online project that invited Star Wars fans to submit their own versions of 15-second scenes from the movie and then pieced the scenes together again … won this weekend at the creative arts portion of the Primetime Emmy Awards.” — Wall Street Journal

The ‘social answerphone’ is born

“Audioboo is brewing a new feature that will let users send private messages to each other — like Twitter’s direct messages, but audio… Describing it as a social answerphone, Audioboo thinks it should be ready for release next month.” — The Guardian

You missed the best thing about the NT News front page; the pointer:

“Is she taking the pith”

Anyone else catch John Stewart’s coverage of “FUX News” covering the “unnamed” Al-Waleed bin Talal, and “those connections”, last night – in their collective hysteria over a “mosque at Ground Zero”?