Katter up! The Queensland Independent steps up to the plate

The more you read about the man the more absurd becomes the idea of Australia having stable government if it has to rely on Bob Katter's vote. 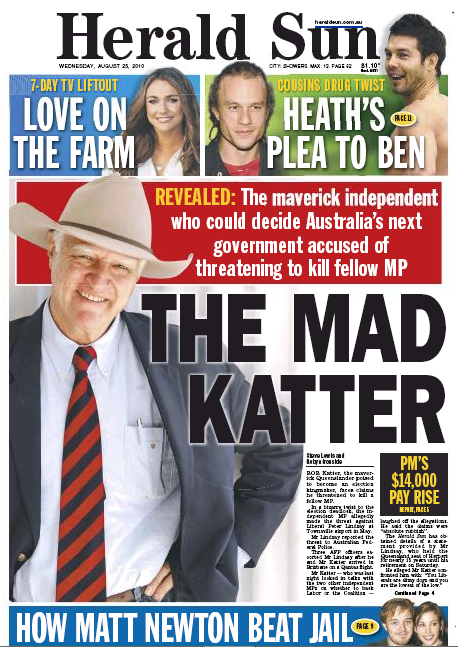 If neither side can get to 76 votes without his then call the sick game off and let’s all vote again without putting ourselves through unnecessary agony.

Germane Germaine. She does write like a charm does Germaine Greer. Her piece, Australian election: Soap opera politics of Oz, in the London Daily Telegraph summarises our election and its early aftermath in a style I can only envy and my only disagreement of substance is in her kind treatment of who she says “if anyone deserves to be in a commanding position it is Katter.”

Making a monkey out of me. No sooner had I praised Tony Abbott for having the good sense to refrain from publicly giving advice to the three country independents than the man goes and gives a press conference on the subject. I apologise. The man has not learned to be politically smart at all. He has just been incredibly lucky.

The blazing heights of current affairs TV. Be assured. Our commercial television news and current affairs shows still have some way to go before reaching the vanguard of world industry best practice. 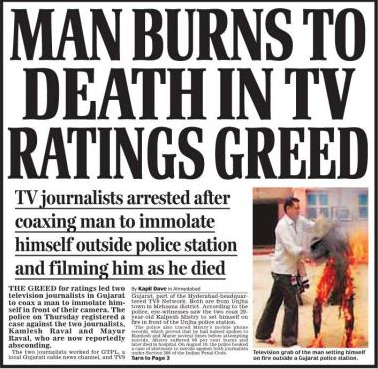 The Indian Mail Today reports that two TV journalists have been arrested in Ahmedabad for coaxing a man to immolate himself outside a police station in front of their cameras.

One for the climate change lawyers. How is statehood defined under international law? Can a state maintain its legal personality despite its lack of physical territory or the uninhabitability of its territory?

How might respective national Constitutional legal interpretations of statehood interact with international law in this regard? How do legal rights to self-determination and territorial integrity play a role in determining statehood? Would a state that no longer has any land still be entitled to a seat in the United Nations, and be able to invoke the legal rights of states, such as instituting proceedings before the International Court of Justice?

Such questions posed by the Center for Climate Change Law (CCCL) at Columbia Law School might sound a bit academic but for the government of the of the Republic of the Marshall Islands they are real enough. The Marshall Islanders saw that in its 2007 Assessment Report, the Intergovernmental Panel on Climate Change noted that sea level is projected to rise at an average rate of about 5 mm/yr over the 21st century, with the maximum rate of rise in the central and eastern Pacific Ocean.

Given that the land masses of many low-lying island states exist at or just a few meters above sea level, rising sea levels raise prospects of land loss, vital infrastructure loss, and population relocation, not to mention the effects on water supply, marine resources, and agriculture that may be wrought by changes in rainfall patterns and extreme weather events.

Thus the decision to get the CCCL to host an international conference on the subject of Drowning Island Nations: Legal Implications and Remedies. The request for relevant papers closes on 1 September.

A danger signal or two. When fears about the future of the Greek economy were at their highest back in May the gap between the interest rate Germany paid on a 10 year bond and what the Greek Government had to fork out peaked at 9.63 percentage points (or basis points as the experts put it.)

The gap narrowed markedly after the European Union and the International Monetary Fund came to the financial rescue after insisting on a Greek fiscal austerity program.

Now, I notice, the gap is widening again:

Doubts clearly are growing that the economic problems of Europe are not over as interest rates for Ireland are also edging higher.

Meanwhile in the United States 10 year bond rates are moving in the downwards direction as doubts grow about the extent of the country’s economic recovery. And get ready for more dismal economic news from the US with some pundits predicting that Friday’s revised figures for second quarter GDP growth will be down from the advance estimate of  a 2.4% annualized rate to 1.3% real annualized growth.

But isn’t it nice that Bob finally has what he’s always been looking for “relevance beyond credentials”? No “Bono”, anymore!