The Tasmanian precedent. Interestingly, Tasmanian Governor Peter Underwood also had his own potential conflict of interest, since his step-daughter Madeleine Ogilvie was a Labor candidate (unsuccessful) at the March state election in the Hobart electorate of Denison. But the issue was never really raised publicly, since the generally accepted view, backed by constitutional/legal experts, was that  the office of governor […]

The Tasmanian precedent. Interestingly, Tasmanian Governor Peter Underwood also had his own potential conflict of interest, since his step-daughter Madeleine Ogilvie was a Labor candidate (unsuccessful) at the March state election in the Hobart electorate of Denison. But the issue was never really raised publicly, since the generally accepted view, backed by constitutional/legal experts, was that  the office of governor was, and had to be seen to be, above influence from any quarter.

Ogilvie had also been scrupulous during the election campaign not to even visit her mother and step father at Government House, as the potential for her candidacy to cause serious problems for the Governor in the (not unlikely in Tasmania’s case) event of a hung parliament resulting from the March 21 state poll was pointed out to her very early on, even before the campaign commenced. An astute Governor Underwood was also meticulous in immediately posting all his written reasons for returning a Labor minority government to power on his website in real time,  practically leaving no room for his decision based on clear constitutional convention to be perceived in any other light.

Ted to get the tap? Major leadership grumblings in the Victorian Liberal Party started as soon as polling figures stated coming in on Saturday night with a swing to the ALP in Victorian-based federal seats. Senior Liberals in Victoria are furious that despite a damning Royal Commission against the Victorian government and the public transport disaster in Melbourne, Ted Baillieu has failed to get any traction against a tired 11-year-old government.

A number of senior Libs were overheard at a party on Saturday night saying that a tap on the shoulder to Ted in the next two weeks is imminent. They hope to do a ‘Bracksie’ and put up a new and younger leader in the months prior to the state election, as the ALP did in 1999.

Hawker to cop the blame? The blame game over Labor’s poor campaign is spreading to its strategist/consultant Bruce Hawker. So the timing of the Barton Deakin announcement is interesting…

Malcolm can’t pick it. Malcolm Turnbull fronted up with Lucy at Double Bay Public School to vote for himself — unfortunately the new hall wasn’t completed — and happily declared to the fawning media he reckoned “it would all be decided by 8.30pm” and that “Tony had done a fantastic job” etc. Interestingly, there were piles of The Daily Telegraph for sale at 50c each near the sausage stand.

A-Pac and the Liberals. Go to www.a-pac.tv for information on Sky News’ parliamentary channel. But go to www.apac.tv and you find something completely different — a message about voting for Tony Abbott. So who’s behind it? 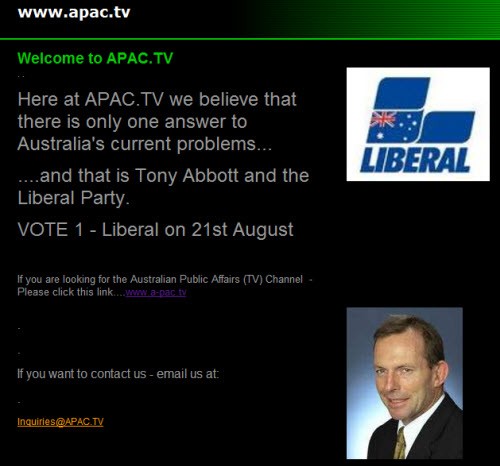 The Villawood ‘group’ lockout. I tried to visit Sri Lankan asylum seekers at Villawood Detention Centre yesterday, but was refused entry because we were considered a “group.” The officer who declined our visit said he works for SERCO, the organisation in-charge for the running the centre, and that he was acting on the “instructions by the SERCO and Department of Immigration”. When we asked him why we can’t go to see the Tamils, he said because “I told you so”. He defined a group as “two to 200”.

So, we left and went a few metres up the road to visit two Sri Lankan families. On the way back to the car park, an hour or so later, we encouraged two girls to go back and try to visit their people inside. They were declined again. They were told: “no Sri Lankans will receive visits” and “no media allowed”. My friend said that media are allowed into detention centres — a right under the UN.