Poll bludger: minority government and the rise of the greens

Minority government was a frequent occurrence in the first half of the twentieth century, and has undergone a renaissance as the major parties’ share of the vote has declined in the past two decades.

To follow is an extract of a conference paper written by William Bowe’s Poll Bludger last year on minority government formation and the rise of the Greens:

Australia has alternated between majority Labor and Liberal-National/Country Party governments since the foundation of the modern Liberal Party in 1944, with rarely more than a handful of independent and (even more rarely) minor party members occupying the cross-benches. However, state parliaments, with their smaller chambers and electorates presenting greater opportunities to convert personal support into seats and influence, present a more complicated picture.

Minority government was a frequent occurrence in the first half of the twentieth century, and has undergone a renaissance as the major parties’ share of the vote has declined in the past two decades. Based on the available case studies, research into this phenomenon has concentrated on independents rather than minor parties. However, electoral trends suggest future minority governments might equally have to contend with the cross-bench presence of the Greens.

Whereas independent members have traditionally won support by promising to advance the material interests of their constituency, Greens members owe their seats to the appeal of a broader ideological and policy program at odds with many of the consensus viewpoints of the major parties (Crowley 2003). This paper will consider the party’s potential to alter the dynamics of minority government formation by comparing its modern experience in Tasmania and the Australian Capital Territory, which are distinguished by electoral systems which allow it a consistent level of representation, with the more conventional scenarios involving independents in the mainland states.

While the formation of the anti-Labor “fusion” of free traders and protectionists in 1910 is generally considered the starting point of the two-party system in Australia, minority government remained a regular occurrence at state level (and an occasional one at federal level) for at least half a century thereafter. Moon (1995: 146) calculates that “minority government years” as a proportion of “total government years” across the six states amounted to 30 per cent from 1910 to 1944, and 17.4 per cent from 1945 to 1977.

However, the period since has seen the frequency of minority government return to levels comparable with the immediate post-war period: repeating Moon’s exercise from the period May 1989 to August 2009, using months rather than years as the unit of analysis, produces a result of 19.3 per cent.

Examining the first four such cases from the vantage of 1995 (South Australia from 1989 to 1993, Tasmania from 1989 to 1992, Western Australia from 1991 to 1993 and New South Wales from 1991 to 1995), Moon questioned the strength of the link between the collective decline in voting support for the major parties (taken in this study to refer to the National Party as well as Labor and Liberal) and the re-emergence of minority government.

It was noted that the transformation of votes into seats remained uncertain for minor parties and independents in majoritarian electoral systems, and that the South Australian and Western Australian examples resulted from sitting members resigning from long-serving and soon-to-be-defeated Labor governments, thus constituting a parliamentary as distinct from an electoral breakdown of two-party hegemony. While the record of the major parties alternating in office remains unbroken, the recent course of events strengthens the thesis that electoral trends have indeed weakened the major parties’ grip on state lower houses.

The chart below shows it was far from clear in 1995 that the trend towards minor parties and independents discernible after 1989 would yield a corresponding increase in parliamentary representation. However, the decline in the major party vote has since been sustained, and has been accompanied by a durable increase in the number of seats won by independents and minor parties at elections starting in the late 1990s.

The acceleration on both measures was driven in the short term by the fleeting phenomenon of Pauline Hanson’s One Nation, which won an extraordinary eleven seats and 22.7 per cent of the statewide vote (from seventy-nine seats contested out of eighty-nine) in the Queensland election of 1998, and performed strongly on the primary vote in New South Wales in 1999 and Western Australia in 2001. However, the overall non-major party seat share fell only slightly, and the vote share not at all, as the party’s star rapidly waned at subsequent elections.

The chart also demonstrates that the total non-major party share of votes, if not seats, has been sustained by the growing strength of the Greens… 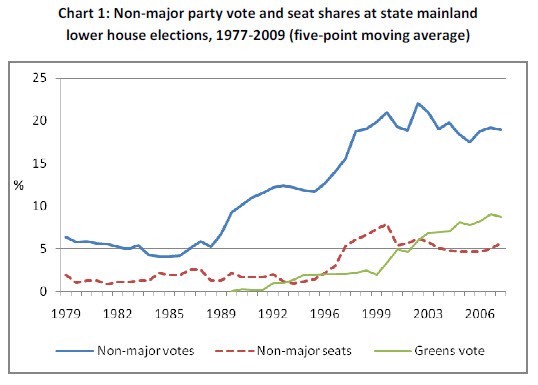 Another lesson of recent experience is that the more radical manifestations of the weakening of two-party hegemony are likely to co-exist with, rather than supplant, the kind of independent politics with which the literature is more familiar. The particularistic concerns traditionally associated with major party defectors are continuing to find expression through the growing number of independents elected in rural constituencies from outside the party system, who have demonstrated a tendency to value both the independence of parliament and the scrutiny of the executive through accountability agencies. Future balance-of-power scenarios are likely to involve complex interactions between actors at both ends of the spectrum as well as major parties, enhancing the potential for consensus-driven policy making and even coalition government… 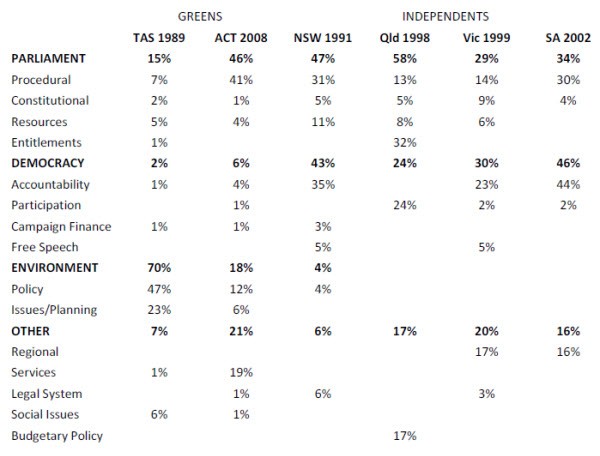 Contrary to the expectation that the Greens agreements would combine parliamentary and constitutional measures with policy commitments, the Tasmanian and ACT agreements appear at first glance to present a mixed picture. Whereas the Tasmanian accord was overwhelmingly dominated by specific environmental issues, the ACT agreement was weighted much more heavily towards parliamentary reform, and in terms of policy commitments environmental matters were given no more emphasis than government services. It could be hypothesised that this reflects the early stage of the political development of the Green independents in Tasmania in 1989, who retained a closer attachment to their roots in environmental activism and had yet to develop the broader platform on social issues which would follow their establishment as an official party.

However, it could equally be seen to indicate the very different nature of the two jurisdictions: one the home to nationally iconic environmental assets and accompanying controversies over their development, the other a geographically small polity in which urban issues are predominant.

Read the paper in its entirety here.