The atmosphere was tense in the Imperial Hotel on Saturday night, with both the Greens and ALP after-parties descending on the Spring Street pub. Plus, Michael John says goodbye and Steve Fielding pushes in line.

Showdown at the okay Imperial. The atmosphere was tense in the Imperial Hotel on Saturday night, with both the Greens and ALP after-parties descending on the Spring Street pub. Instead of coalescing into a pleasant Imperial purple, the two camps glared at each other from either ends of the bar. With the ALP drowning their sorrows and the Greens having just drowned the ALP’s hopes for retaining the seat of Melbourne, all was not well between the Judean Peoples’ Front and The Peoples’ Front of Judea.

There could be a few fireworks in the Upper House from next June when the new-look Senate sits. In a verbal stoush with members of the Labor faithful, Greens senator-elect Richard Di Natale apparently showed success had not mellowed the former Coburg VFA footballer. He was seen delivering several telling verbal shirt fronts to hapless ALP foot soldiers, who were still looking to tackle him well after the siren.

One Labor stalwart, clearly tired and emotional after a fruitless day of campaigning in Melbourne, was heard to deride victorious Greens candidate Adam Bandt as “a lost cannon [sic]”. As Crikey‘s witness left, things looked set for a duel of fair-trade canvas tote bags at dawn. — – a Crikey reader

Johnson says goodbye. Although Michael Johnson has seemed to have a tenuous grip on rationality during the campaign, I had to feel for him this morning, standing by the freeway holding his hand-written “serving you was an honour” placard, and looking very alone. Kudos for graciousness in defeat! — a Crikey reader

Albo’s not making friends. While I was waiting in the (very) long queue at Stanmore Public School, a man in an orange cap began walking briskly down the line. “Hullo, vote for me!” Anthony Albanese shouted at us. The curious thing was that he made no eye contact, and did not speak directly with any person in the queue. When someone called out that this was hardly engaging with the public, he yelled back that the Liberal candidate hadn’t made an appearance at all.  Then he vanished.

I understand that people at other booths were treated to a similar spectacle. There are many reasons why the inner west is turning to the Greens. The campaigning skills of our local Labor members (state and federal) is one of them. — Crikey reader Joanna Mendelssohn

Don’t you know who I am?! Steve Fielding may be gone from the Senate, and you can bet those voters he tried to push in front of on polling day didn’t provide any support… 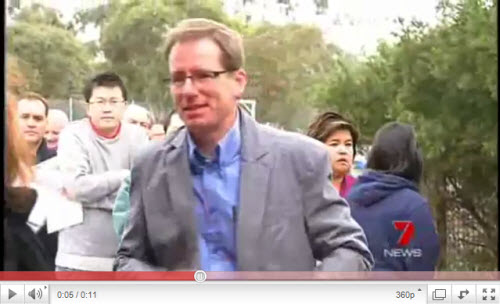 Generic negative campaign. I spotted this little sticker in the corner of one of the ‘more boats more taxes, etc’ signs that the Liberals had stuck up around the Kew Primary School booth in Melbourne. Seems to me that ‘generic negative’ sums up the whole sorry campaign. — Crikey reader Philip Millar 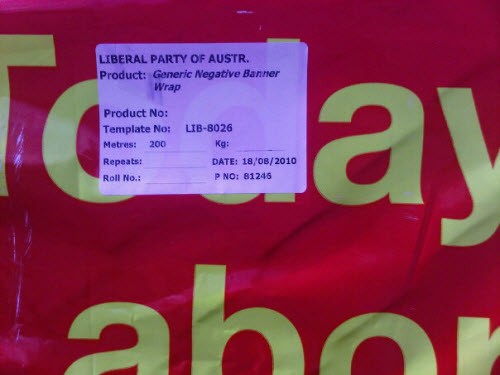 Robin missing in action. Spotted this in Batman (actually, it was in Martin’s office — I think they appreciated the joke). — Crikey reader Paul Johanson 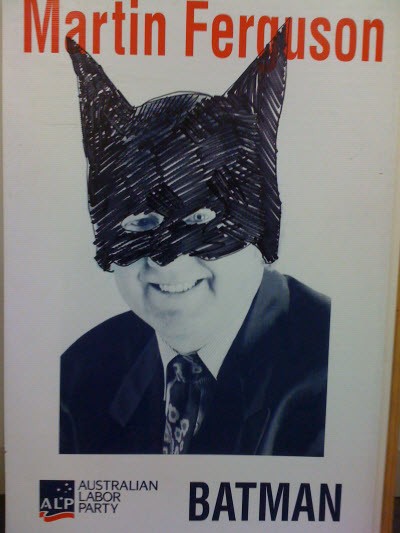 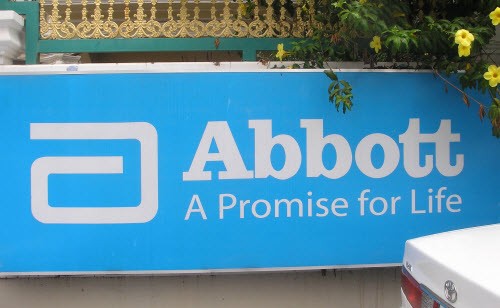